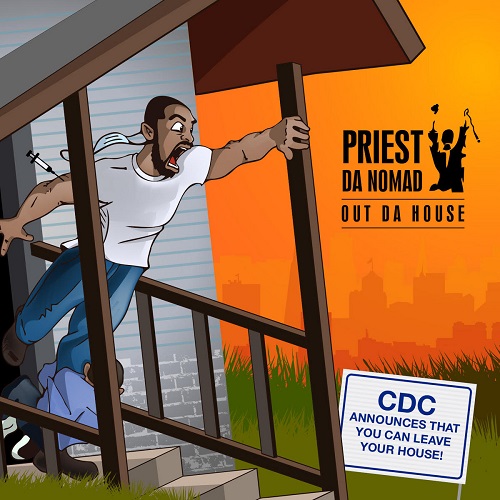 Billed as the first post-COVID hip-hop album, DMV artist Priest Da Nomad takes the listener on a somewhat short and vivid journey “Out Da House”. The restrictions due to COVID pandemic have been in place for over a year and with the DMV area opening back up for business earlier this month, it also opened the door for unbridled expression. “Out Da House” functions as a narrative, a concept album detailing in nine tracks just how Priest spent his first night after the bans were lifted. A mix of comedy, drama, and relatable details about being quarantined, Priest attempts to break out with a career that’s lasted more than two decades.

Starting with the Unown-produced title track, Priest intends to celebrate getting out of the house by partying. Many couples can relate to being cooped up together to the point where the idiom “familiarity breeds contempt” becomes an understatement. To that end, Priest urges you to “get the fuck up out da house!” The psychedelic sampling “Gotta Get It” is filled with several back-to-back multis courtesy of Priest, and his cadence throughout the album is reminiscent of KRS-ONE. Featured is Oxon Hill rapper Storm the Unpredictable who reps his city with a nasal flow. The next track, “Before You Go”, is produced by DJ Rage who laces it with bluesy guitar strings as Priest raps verses specifically for macking on women. Like Biggie, he acknowledges his physical unattractiveness, but makes it work to his advantage nonetheless.

The ‘70’s vintage sampling on “Confused” serves to highlight the braggadocio of Priest’s lyrics as he befuddles his opponents. The only track that could qualify as filler on the album is in the form of the skit “Ladies Night Interlude”, but it leads into “My Love”. Featuring Deborah Love singing mostly throughout the track, the barely rapped song also deviates from the production. Produced by Priest himself, it’s synth-heavy and, within the album’s narrative, I’m only guessing this part is where Priest is heading to his first post-COVID night club.

Priest “gets back on some hip-hop shit” on the Vintage-produced “Pumpfakin” with steel snares and a chopped organ sample. “Fine Whiskey” features crooner Sy Smith and has a more atmospheric production courtesy of Judah. A Priest-remixed version of “My Love” closes out the album, only this one contains a rapped verse from him. The brevity of the album (nine tracks) is also reflected in the length of the concept on “Out Da House“. Though there’s only so much which can be done in the span of the day, a concept like post-COVID activities leaves much to be desired considering Priest’s ability to sharply tell it.