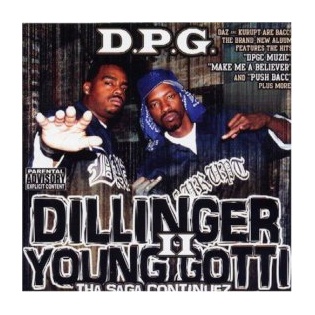 Just to clear things up from the jump, this is a Dogg Pound album. For legal reasons, Kurupt and Daz can’t use their own name but rest assured this is a Dogg Pound album and more importantly this is an official Dogg Pound album. If you remember the last “Dillinger and Young Gotti” project chances are you also remember the subsequent “Dogg Pound” releases that consisted of little more than rehashed and aged verses over bland production. While Suge Knight’s greed and Kurupt’s own indecisiveness can’t guarantee we won’t see “Dogg Pound 2005” released this time around, “The Saga Continues” is as official as it gets. The last D.P.G. was an instant hit in the streets across America, as die-hard fans and new school gangstas alike found the closest thing to true 90’s G-Funk since Death Row’s hey day. “The Saga Continues” follows up Vol. 1 nicely, though it provides nothing new or fresh this time around. Far from the group’s best work, the album will still manage to please hardcore fans though it will probably do little to attract new converts.

After an unnecessary intro, the album kicks off with “DPGC Muzic,” a track which exhibits all that’s good and bad about DPG all at once. Daz and Kurupt spit with the energy we’re all used to, but the subject matter is nothing new. The track captures the classic Cali bounce, but at the same time Daz’s simplistic loop (and he literally loops the same 5 note pattern every bar for the entire track) can get boring quick. “Blast Em Up” is another unnecessary skit but is followed by the impressive debut of D.J. Xtra Large on the production. Though Xtra Large along with Ivan Johnson have most likely contributed to previous Gangsta Advisory releases, their production is new to me. As Daz’s protÃ©gÃ©s they hold their own and outshine Daz on certain tracks. Xtra Large’s slowly creeping production on “Cuz I’m A Gangsta” embodies all that’s good about G-Funk. Daz and Kurupt once again let their energetic flows make up for the stale topic matter. Ivan Johnson’s feel good production on ” Hittin Donutz in the Street” makes for the perfect, though late, summertime anthem. Ivan Johnson continues the feel good vibe on “Say It,” as Daz and Kurupt combine for mixed results. The verses are at their usual solid level, but the call and response hook gets cheesy quick. Johnson stumbles a bit in “We Gitt” as it comes off as a failed attempt at “gangsta crunk.”

Daz returns behind the boards on “U Remind Me,” where we get to hear the oddly named Men-efer handling the hook. Though the Pound’s classic “Let’s Play House” dealt with the opposite sex, this track doesn’t fit DPG’s style at all as it comes off as a blatant attempt at a radio hit. “Make Me A Believer” is probably more like what is expected from the Pound as they brashly address the ladies over a decent beat from Daz and Johnson. “I Luv When U” is another track catered towards the ladies, though this time around it’s a bit more positive. Had the softer tracks been spread throughout the album they might have sounded better, but grouped as they are they sound a bit out of place.

DPG picks up the pace on “What U Gone Do” with another fast pace gansgta anthem, Daz’s loop can get repetitive once again, but Kurupt’s on point flow makes up for it. “Push Bacc” follows as L.T. Hutton shows up with a pounding beat and the duo drops their usual ferocious brags. “Ride and Creep” ends things with what is probably the album’s worst track, as the concept and beat sounds like everything else coming out of Cali right now. The Outro should have probably just been labeled as a song of its own as it actually turns out to be one of the album’s better tracks. The deep flowing bass is perfect for Kurupt and Daz to craft another Dogg Pound anthem.

“The Saga Continues” is definitely worth the purchase for any fan of the Dogg Pound. While DPG’s gangsta antics are a bit less appealing the second time around, the duo still packs a punch. With their longevity in the game one would hope DPG would have a bit more to say than your average gangsta lyrics, but as it stands they still spit classic gangsta shit better than most of the acts out now. The group could definitely step up its game both with the production and subject matter, but, for the time being, their finely tuned flows and gangsta attitudes are enough to hold them.