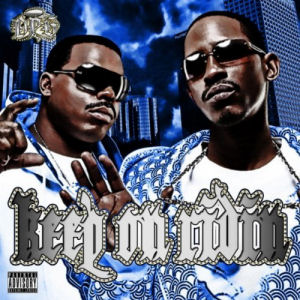 I recently read an account of the Dogg Pound discography which estimated that between solo records, group efforts, and side projects, Daz and Kurupt have put out three dozen albums since their seminal Death Row debut “Dogg Food” in 1995. While common logic would suggest that such oversaturation would lead to watered-down releases (it has) and decreasing anticipation with increasingly frequent release dates (it has), their philosophies seem to be total opposites of their early mentor and collaborator Dr. Dre’s, who despite massive demand has released a grand total of two albums in two decades as a solo artist. Yet such is the way of the rap gameâ€”a frustrating perfectionist, Dre remains the West Coast’s most recognizable name, while despite having sold millions of records, Tha Dogg Pound maintains a very low profile at the dawn of a new decade. It seems each DPG record has less buzz than the one before it, and six months after 2009’s “That Was Then, This Is Now,” an album so poorly promoted that many longtime fans missed it, and less than a month after Kurupt’s “Streelights,” “Keep On Ridin” saw the light of day. Prior to the release of “Keep On Ridin,” press releases surfaced advertising their next release titled “100 Wayz” due late 2010. Now I’m no marketing major, but something tells me that it’s inadvisable to push your next LP before your current one drops.

Then again it’s hard to tell exactly what “Keep On Ridin” is supposed to be. Like “That Was Then, This Is Now” before it, literature on it is virtually nonexistent, and some of the minimal descriptions available label it a “compilation album.” On “Don’t Give a Fucc,” Snoop Dogg tells listeners, “Hope you enjoyin’ this motherfuckin’ mixtape.” Some of the tracks turned up in various forms on mixtapes in years past, while others could well have surfaced from their no doubt massive volume of vaulted material. In any event, it’s yet another record with the DPG label (I don’t know why they continue to release music under both monikers besides to confuse people) just in time for summer.

Few groups do summer like Kurupt and Daz, who since the mid-90s have made livings producing sunny California funk with a gangsta sheen ideal for the warm-weather months. The title track is a twangy funker featuring Butch Cassidy, Nate Dogg’s likeminded cousin who appears to have assumed his role during his health crisis. The best song, “Stay’d Out All Nite Long” features clever production and a soulful Uncle Reo doing a humorous Isley Brothers impression as he recounts, “I stayed out all night longâ€¦sippin’ off that gin and juice.” The smooth, bouncy “If U Want Me 2 Stay” is a highlight, while “We Da West,” also the title track from a recent Snoop Dogg mixtape, is a six-and-a-half minute posse cut featuring Snoop, Badlucc, Damani, Problem, and Soopafly.

The most common knocks on latter-day DPG releases are that Kurupt has lost his fire and Daz’s rapping and production have hardly evolved. Both criticisms hold weight here; based on its sound, “Keep On Ridin” could easily have been released eight years ago, and may very well have been recorded then. Most of the production, supplied as usual by Daz, Soopafly, and Battlecat, is very sparse, lacking even the steady grooves of their late-90s tracks, reinforcing the notion that it might be something of a hack job. Lyrically it’s predictable, rehashing their concepts and phrases from throughout the last decade. While Kurupt brings nothing reminiscent of his turn-of-the-century pinnacle (the banal “My CoopDeville” is a particularly weak performance), when he hooks up with Daz, ain’t nothin’ changed but the weather. Another thing “Keep On Ridin” has going for it is that Snoop Dogg appears on six of the fourteen tracks. When Snoop hooks up with Tha Pound, it’s always a treat because regardless of what he’s up to on his own, it takes him back to his LBC gangsta rap roots.

Like most of the latter-day Dogg Pound records, “Keep On Ridin'” has a few bangers and some filler. The heavy, electric guitar-laden “Fire” sounds like a cut from 2007’s “Dogg Chit,” and the silky smooth “Real Wit’cha” with Scar and Problem recalls the clever tongue-in-cheek humor of “Let’s Play House.” The lighthearted “Leave a Message” and gritty “I Wanna Rock” are both likable, while the street-ready “I Don’t Give a Fucc” and “Blessin’,” a heartfelt look back at lost loved ones, are among the best material here. “Huh What” and “All Nite” should have been left on the cutting room floor, both awkward club tracks that despite solid beats go nowhere lyrically.

Eighteen years after each appeared on “The Chronic,” it’s fascinating to consider the different paths through superstardom Dre, Snoop, Daz, and Kurupt have taken. 2010 finds Dre perhaps the most sought-after producer in hip hop, if not American pop music period, whereas Snoop went the gangsta-turned-pimp-turned-godfather route, arguably as infamous a personality as a rapper. It’s somewhat reassuring, then, that despite gold and platinum plaques on their walls, Daz and Kurupt are still sporting blue and repping the LBC into middle age. Like the records that preceded it, “Keep On Ridin” features some surefire bump material and some throwaway filler, but certainly enough to satisfy their diminished legion of dedicated fans. Despite all it would seem to have working against it, it’s not only listenable but quite enjoyable. While they may not command the same press as they did in their multi-platinum days, listeners can be certain that as sure as the sun will shine in Cali, Daz and Kurupt will “Keep On Ridin” into the new decade.