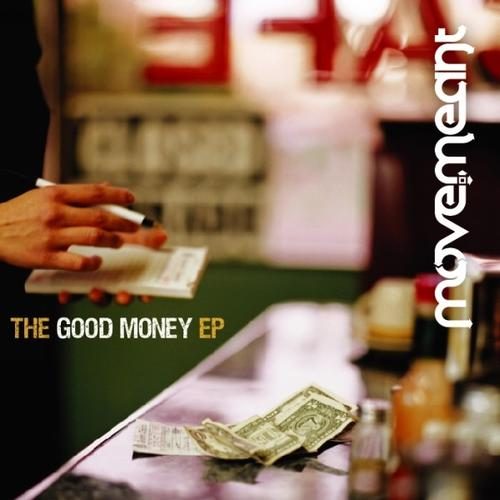 With the amount of rap acts bumrushing the industry’s entrance gates day after day, it has become increasingly difficult for aspiring beatmakers, DJ’s and MC’s to find someone to lend them an ear. So when you’ve got an upcoming release that boasts two songs that have already been featured in an internationally screened movie, somebody did their homework. According to the press information that came with this promo CD, the Move.meant songs “Str8UpNDown” and “Problems” both appeared in last year’s critically acclaimed LA social study _Crash_. Additionally, their music has been used in the CBS show _Joan of Arcadia_. Industry insiders are undecided whether this kind of promotion really results in more sales. But for virutal unknowns it seems like a good way to get their foot in the door.

Ironically, it might be even harder to place a song on the radio, not to mention a clip on television. That’s why the CD version of “The Good Money EP” is enhanced with the video for the title song. It’s a quality clip for a quality song, but in the current climate it would be out of place on most music channels. As an ode to getting one’s hands dirty in a very traditional sense, it would significantly disturb the glamour and glitz that adorns many of today’s rap videos. Needless to say, that’s exactly why “Good Money” needs to be heard. Because it talks about “long days, late nights,” “sweat-breakin’, back-breakin’, heart-breakin’ hard work,” “no breaks, low pay, lousy benefits / projects, trailer parks, housing tenements,” “Kool-Aid, Top Ramen, peanut butter jelly / bill collectors, bad credit, pre-paid celly,” “swap meet, mom & pop, dry cleaner, corner store / post office, pawn shop, paper routes door to door”, “telemarketing, retail, white labels / working drive-thru, dish-washing, waiting tables.”

“Good Money” is a song that values the worth of a blue collar job and at the same time exposes a society that allows the existence of working poor. Move.meant argue that there are different kinds of money, and that hard-, honestly earned money is the one they respect the most. Rap is notorious for promoting illegal means of making money, while American society as a whole often blindly bows down to the almighty dollar, regardless of how it’s generated. “Good Money” tells you that it’s okay to have a low income, but that it’s not okay when the hardest working people have the lowest income. It may be written in fragmentary language and contain few finished sentences, but it gets its point across nonetheless, the rush of words illustrating the stress ordinary people handle on a daily basis.

Unorthodox promotion and a critic’s sympathy aside, the primary source of inspiration for a record review is still the music. So do Move.meant rate good music as high as good money? They better had, if they want music to be their way to make them some of that good money. Musically, the LA-based trio possesses a solid foundation. Producer Just Beats and DJ Spider know their hip-hop, constructing melodic tracks that spread good vibes. The array of instruments heard makes it certain that Move.meant’s beats are sample-based, but at the same time it is arranged in a way that the music never sounds recycled. Just Beats focuses on a few reliable elements, building “Good Money” for example on the contrast between smoothly lingering, soulful textures and an engaging piano part that alternate throughout the song. “Str8UpNDown” relies on delicate wind instruments, while both the original and the remix of “Move On” are powered by anthemically chopped horns, making a reviewer remember the once popular term headnod-inducing. But nodding your head ain’t the only way you can get into the groove here, as “Problems” is hip-twisting hip-hop that should get any crowd to move.

While “The Good Money EP” is solid, it certainly isn’t spectacular. This is traditional hip-hop, not hip-hop that sets out to tread unknown territory musically, not hip-hop that makes you forget everything you’ve heard before, not hip-hop that is on some next shit. The group’s vocalist, Champ, fits right into the picture. He sounds comfortable over these reassuring tracks, blending into an organic whole. Lyrically Move.meant offer a positive message in measured wordplay. As a “rhyme courier,” who puts “the message in my delivery,” Champ takes “the liberty cause liberty was taken.” Move.meant’s music is meant to move in every sense. Last but not least it is a call for hip-hop to “Move On,” to “get past rims and thangs, past Timbs and chains,” to “lose the hatred, lose the drama, lose the beef” and to “find your rhythm, find your soul and find peace.”

Like many fellow do-gooders, Move.meant are quick to address “Problems,” but fail to follow that up with possible solutions. I’m not sure if it’s really the smartest move to quote from JFK’s inaugural address just to exclaim moments later, “We don’t need no water, let the politicians burn!” Obviously the politicians they have in mind are the ones in power right now, but there’s something terribly naive about calling for a revolution without once pondering what comes after: “Round up the culprits / tear down the podiums, platforms and pulpits / they all full of shit, raise up, and right now / turn this whole thing upside down.”

Move.meant use hip-hop as a means to rally people, whether it’s rap fans who can’t understand “why they play Timberlake on BET / but won’t play PE on MTV,” or citizens concerned about how “government’s cookin’ peons up to head of state.” They should appeal to fans of groups such as People Under The Stairs or Dilated Peoples, provided they don’t expect the same level of refinement. The best thing about “The Good Money EP” is its title track. The second best thing is the title track’s “Step Fam Remix,” which features additional commentary from Trek Life, Blest, and Crush One. Feel free to check the “Good Life” single and wait for the upcoming “The Scope of Things” full-length, but for what it’s worth, “The Good Money EP” is a promising prelude.