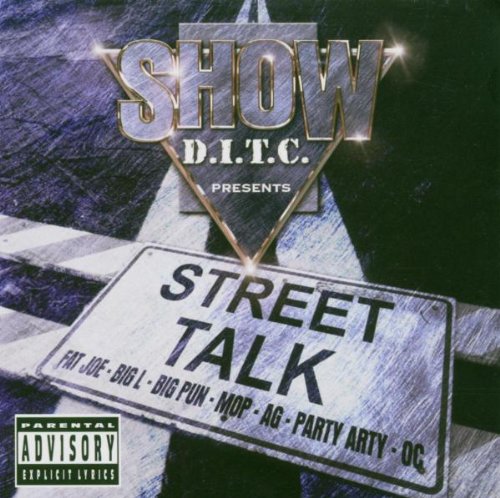 His production credits reach back 15 years in time, beginning with Lord Finesse & DJ Mike Smooth’s “Funky Technician” album. His catalog contains classics such as “Sound of da Police,” “Devil’s Son,” “Yes You May” and “Fat Pockets.” He has worked with heavyweights like Freddie Foxxx, KRS-One, Big L, Fat Joe, Big Punisher, Sadat X, Organized Konfusion and O.C. He continues to hold down a spot in a duo that has almost been around as long as Gang Starr. He’s part of a collective that has come to embody traditional New York rap like no other.

Despite these accolades, Rodney Lemay often goes unrecognized even under his professional moniker Showbiz (in later times usually shortened to Show.) His relatively sparse output notwithstanding, he might be a more familiar figure if the game had been kinder to him and his affiliates. Neither Showbiz & A.G. nor D.I.T.C. were really able to present themselves the way better financed ventures were. Show & A.G.’s two LP’s and two EP’s were scheduled extremely irregulary. D.I.T.C. struggled to release a full-length for years, resulting in two or three different versions of their Y2K album. A second album was to be distributed by Rawkus before it went out of business.

Add the fact that the crew’s star-to-be, Big L, was murdered in 1999, and it’s easy to see that the forces of D.I.T.C. were bound to disperse. The creation of Wild Life might have been an attempt to gain control over the collective’s career, but upon the introduction of the new brand, this reviewer wondered whether D.I.T.C. now had an official successor or whether it continued to exist. “Street Talk,” while billed as a Show solo album, bears the D.I.T.C. acronym, but none of the rappers on it care to shout out D.I.T.C. A number of them are busy repping G.D., which used to stand for Ghetto Dwellas, a group consisting of Party Arty and D-Flow. Nowadays, G.D. apparently is something called the Get Dirty Movement, which may or may not include A.G., A-Bless and the aforementioned Ghetto Dwellas.

That’s the kind of speculation provoked by an album whose most reliable quality is that Show produced all but two beats. “Street Talk” lists 18 tracks yet is over in 52 minutes. It contains no skits and no instrumental interludes, but eleven songs that don’t reach the three minute mark, while only one lasts longer than four. While not advertised as a mixtape, “Street Talk” fails to generate a proper album atmosphere. Most of the times, you get two verses, one hook and a more or less professional fade-out. This wouldn’t be particularly objectionable if two of the rappers weren’t dead and if their verses didn’t sound familiar. Here’s hoping that Show didn’t resurrect Big L and Big Pun acappellas just to strenghten the profile of his own record. It comes as no surprise that we’ve already heard L’s raps, who’s known to have recycled his own rhymes. “Best Behavior” on the other hand borrows a verse from one of Pun’s soundtrack contributions. Stranger even, “Where Ya At?” was a Pun/Milano duet on “D.I.T.C.,” here “Where You At?” is a match made in heaven as L joins Pun, making the latter’s claim that we witnesss “the two nicest niggas unite as one” ring truer than before.

There’s no telling whether the Party Arty/Big L duet “Back in My Hood” ever took place in real life. One might even go as far as questioning the authenticity of “On My Way” and “My Bad,” which both feature Party Arty alongside Fat Joe. Knowing how the Don is always down to put in work for his crews, such suspicion is surely unfounded. But it is nurtured by a whole bunch of unfinished songs. Not into that category fall “Pounds Up (Remix),” another demonstration of how good MOP sound over all sorts of beats, as the understated symphonic funk takes nothing away from Fame’s and Bill’s verbal firepower. Fat Joe’s “Bronx Tales” (no relation to “Bronx Tale” off “Jealous One’s Envy”), albeit short, could almost be called a career highlight, the storytelling displayed revealing the complete MC Joe has turned into over the years, while Show’s blaxploitation-influenced beat provides the perfect soundtrack for the tale of revenge to come alive. Lord Finesse uses similar (but less dramatically arranged) instrumentation on “Ridin’ & Rollin'” featuring D-Flow and A-Bless. Milano curbs his temper on the Lord Finesse-produced, subdued “Done in Vain,” while he’s much more upbeat on (the previously released) “Deal With a Feelin’.” Party Arty’s “Look at My Life,” while slightly generic with the sped up soul sample, shows the Ghetto Dwella as an accomplished writer:

If beats and rhymes are all it takes to satisfy you, “Street Talk” features a fair amount of both, but doesn’t hold too many surprises. Like on “D.I.T.C.,” the clean sound and the simple structure of the beats will have some waxing nostalgic over the richness of Show’s ’90s productions when he was working with engineer Eddie Sancho. With “Best Behavior” (a simple match-up of a horn section and a funky drummer) and “My Bad” (an ill piano loop sustained by thumping drums), Showbiz proves he still got that old Soul Clap. “On My Way” and “Chase Game” take the slick ’80s approach so popular these days, the latter ending up bland and boring despite the centerpiece Biggie sample. The lush “All Seasons” and “A Lotta Luv” dress for the occasion (Party Arty running game). Straight up disappointing are “Show & Prove” and “You Ain’t a Killer,” which both sound like they never left the sampler they were crafted on.

In the end, “Street Talk” is a typical new millennium D.I.T.C.-related release. You cop it expecting big things, only to realize that A.G. and O.C. still fail to live up to their former format, that Lord Finesse still has no intention of picking up the mic, that rap experienced a great loss with the deaths of Big L and Big Pun, that Fat Joe is kinda nice with his, etc. Having stopped rapping almost a decade ago, Showbiz cut himself out of he possibilty to advocate his own beats. In his role of executive producer and beatmaker he fails to construct a cohesive album, turning it into a half-hearted showcase instead. Other options surely would have been more worthy of pursuing, such as a new project with his partner A.G., or an entire album with the heavily featured Party Arty (usually a known nuisance), who gives a surprisingly complete performance.