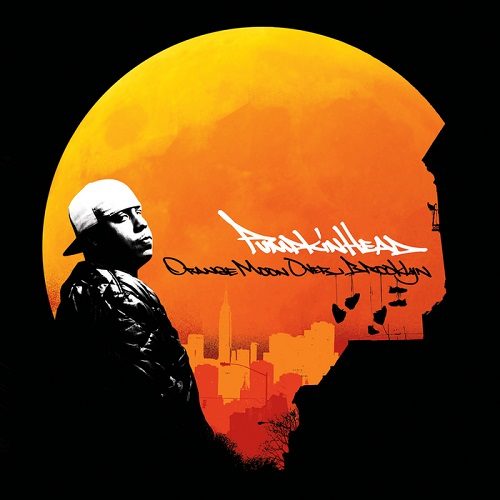 The harvest moon is one of my favorite celestial sights next to a meteor shower or a total eclipse. When this orange moon rises in the night sky, you know fall is passing and winter is soon to come. The winter of Robert Diaz’ discontent is that while he’s been a much beloved favorite in the underground for years, his career has not flourished in any of the year’s four seasons. His crop has yet to be harvested, and all the years he’s spent toiling in the Brooklyn soil have been for naught. Pumpkinhead achieved some underground success with his “Dynamic” single, but clearly his time had come when I heard the classic track “Con Artists” by Skeme Team. With a vocal tone and delivery that was both distinctive and mesmerizing, his punchlines were on some “OH SNAP, REWIND THAT” shit. He bragged about being “tight like a dyke in a thong” and that he “could even scheme a priest into liking this song.” Clearly Diaz’ time had finally come.

As the moon rises, so too does it fall. Pumpkinhead declined from view despite putting out the “Beautiful Mind EP” in 2003, and got no closer to achieving mainstream success. Biding his time, Pumpkinhead waited for the right record label to come along and help him reap what he had sewn. It seems he has finally found the right partner in Soulspazm Records, a label as dedicated to his vision as he is and innovative enough to distribute his album both in stores and online through services like Amazon

. Once again the macabre-named rapper’s time has come, and the “Orange Moon Over Brooklyn” can be seen from coast to coast. He’s lyrically deadly and plenty pissed off right from the start on “Alkaline’n’Acid”:

“This is the beginning of greatness, I broke out the Matrix
Take a deep breath, open up your platelets
And take this and make this your own, face it
In case kids try to recreate this in clone
I was spawned of a different breed, a bloodline of kings
Downloaded into your dreams, in the form of MP3
Been on two labels, one took a break the other folded
They didn’t understand what I had was golden
A leader amongst thieves, a warrior amongst men
Since the age of 13, a savant with a pen
Put me in front of a microphone I’ll spit out a gem
covered in phlegm, music I make it rough to the end”

Despite the inability of the music industry to take advantage of Pumpkinhead’s talents (or vice versa) the biggest hindrance to his success has often been an inability to match his throaty vocals with the right beats. On “Orange Moon” the problem has largely been solved thanks to Marco Polo. I downloaded this album directly and I don’t have any liner notes as a result, but given that Diaz name-checks him on the majority of the tracks it’s hard to not give him all the credit. This starts on the beautifully melodic track “Authentic,” where Pumpkinhead flows over a jazzy xylophone tone and vows to bring the 1992 golden era of hip-hop back in 2005. The only problem with that sentiment is that he’s not only too advanced for ’92, he’s probably enough beyond ’05 that even 2006 will have a tough time catching up. Is America ready to deal with the violently rebellious sentiment he spits on “Grenades,” or will the Patriot Act catch up to him first?

“Praise to the most high for blessin me with a seed
Now I gotta make it to the top with _Speed_, like Keanu Reeves
And when I bleed, I feed a million children indeed
With the knowledge and the strength that they need
Fuck the military! Man beg my pardon
The only thing my dad got from them was agent orange
Cocksuckers experimented, on they own soldiers
I’d rather be in a coma than help fill in they quota
Give me a bulldozer, and before the world is over
I’ll find Bush and his daddy and run both they asses over
The Bush’s are trigger happy and wanna be in a war
Two people they’re like raisin the taxes and killin the poor
I say I put the sword to they jaw, let it off
’til they jaw fall to the floor, and Colin Powell callin the morgue
You call him a hero but I call him a whore
Gettin pimped by the system that wanna see the end of us all”

Rappers always want to claim hard but THAT’S hard. The revolution won’t be televised, it will be downloaded – although Pumpkinhead’s got a few choices words for the online rap heads on the track “I Just Wanna Rhyme” too:

“I love rhymin, it’s more than a job it’s a passion
It’s more than plaques, advances or sponsored fashion
It’s a culture, not to be toyed with so the boy spit
rhymes that make your mind go ‘Eww’ like the smell of boiled shit
See first, I did it for the enjoyment
But now I won’t front, I do it for the love of employment
See what my point is, is that you net nerds are annoying
Like hip-hop, revolves around you and the Pampers you soilin”

Touché Señor Diaz. Honestly he’s right though – he’s out on the front lines making this shit, while a lot of us are just writing or talking about it. At least the internet enables those who are interested in his project to download the entire thing at a convenient $9.99 price, and you can always burn a copy to play in the ride. There’s one thing we can all agree on though – “The Best” things in life are worth remembering and celebrating:

Pumpkinhead’s genius is that he’s funny even when he’s being serious. That last line had me falling out for real – Gobots seemed straight whack once Transformers showed up on the scene. “Orange Moon Over Brooklyn” is jam-packed with his personality, not to mention his refreshing and unadulterated take on what’s right and wrong with hip-hop today. The skit tacked onto the end of “I Just Wanna Rhyme” is a hilarious look at what happens when too many toy freestylers spit about loaded weapons in a cypher. “Swordfish” finds Diaz’ berating Marco Polo for running the beat backwards, which is a doubly funny joke for those who remember the “Dynamic” remix. Diaz spits some incredibly uplifting (but non-corny) positivity too instead of just cracking jokes or talking shit on every track. “Jukebox” is an ode to all the hip-hop tracks which influenced him and that still rock to this day. “Anything” offers these simply heartfelt sentiments: “All you need is willpower, strength and faith believe it/Anything you set your mind to do, you can achieve it.” And on “Rock On” he salutes those who are climbing up the same difficult wall he had to hurdle for success in the B.I.:

“Fasten your seatbelts, we’re takin off soon
I’m gonna rock rock on, on a rocket to the moon
Start a label up there, sign an alien rappin clique
Sell a million units, and get paid in amethyst
Cause on this planet, reality doesn’t exist
You’d rather sell souls than to sign some real shit
But I refuse to put it in park so I’m shiftin the gears
Even though time flies, I’m 28 in years
That’s about 10 thousand and 2200 months
Spittin heat for ten years and haven’t been signed once
How I’m ‘sposed to blow up, when independent labels front
Don’t pay up, don’t promote, your record label sucks
You got MC’s out there that deserve to get put on
So for them, I’m gonna rock rock rock on”

I don’t really care whether you order it, purchase it at the local record store, or download it directly to your iPod like I did. All I can say is this – Pumpkinhead’s “Orange Moon Over Brooklyn” is worth getting by any means necessary. The shocking thing is that Diaz sounds like he’s only touching the tip of the iceberg on this album, and with a wife and seed to support he’s undoubtedly going to keep rocking the mic and putting out new projects for the rest of this decade and beyond. I can’t wait for the next harvest moon to rise over the hip-hop landscape.