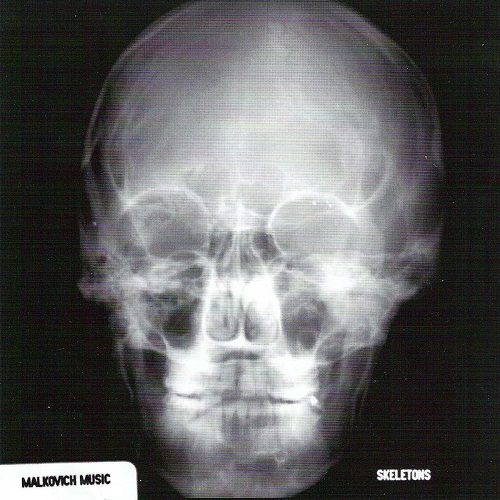 Coming back from visiting family in an old age home in Florida, I wasn’t much in the mood for “Skeletons”, Malkovich Music’s debut album. I’d passed enough bent white-haired people that looked enough like the x-rayed skull on the cover to swear me off of death for another fifty years at least. But duty calls, and I put my fears of mortality aside and turned up the volume.

My hesitation on the subject matter was not wrong, and Malkovich from the get-go lets you know exactly what kind of album this is. “Searching”, the introduction, is an eerie voiced-over instrumental that bookends the album. Searching for what exactly? After a good listen, the only conclusion I could draw is that it is The Meaning of Life – all expectation to the contrary, it turns out to be depressing quest.

Given the serious quality time I spent with a sampling of America’s elderly, “Old Souls”, the strongest track on the album, seemed somehow perfectly appropriate. Dedicated to the wise, to the aged and experienced, Malkovich takes it as an opportunity to showcase his lyrical clarity. He moves easily through various flows, building abstract bricks of rhymes on top of each other into surprisingly effective verses. Sometimes it sounds like every word he’s spitting is being checked back, like taut piano wire is strung between his jaws holding each word for a moment before springing it free. At other times though, intricate wordplay spins without pause, Twista without the party and philosophy stapled to his forehead.

“I leapt aboard a thought and let it transport me abroad
Humid Tunisian nights white tunic clinging to the sweat in my pores
Cheap whisky and witty whimsy with a native missy playing soft-spoken
Till the room fills with smoke and I cough choking
Woke in the flames took a breath as if expected this
But now somehow deep down feeling doubt I never did
I roam the realm in fits
Caught my reflection through the mist
And there I was a little kid again innocence in the flesh
And its picturesque what I picture for myself
Just a white picket fence a couple pictures on the shelf
But now my life is something else
And nothing is for sure
Things that seemed so clear before just aren’t as clear anymore
But in sickness and health I take the dive and stay alive
Ain’t no talk of suicide it’s do or die, truth or lie
Till a ray of light undetected by the naked eye
Shines through the sky taking me back through space and time”

Dense! He has a chalky flow down the lines of Aesop Rock, but at least he tends to use a subject and an object in his sentences â€“ and doesn’t need to publish a small book for people to figure out his message. The smoky track also gives a shout-out to DJ Kool Herc of all people, surprising in an album that has more akin to Sage Francis or Slug than it does to Bronx block parties. But hey, as too many people forget â€“ it’s all hip-hop.

The production as a whole is thick and melodic. Pulling together an arsenal of competent producers, Malkovich is fitted with a strong suite of dark and brooding beats to work over. The well-chosen melodic samples and trim effective drum lines have that kind of tired late-night goodness. That might only make sense to me, but it’s the best description I can come up with. Earganic and Nocturnal Ron, individually responsible for most of the album’s tracks, both have a feel for that kind of heavy sharp-dull production, and while they don’t shine, they certainly ably provide. The album has much to offer, but you have to take it as a whole. Some tracks certainly could be cut without much loss, but ultimately everything makes some sense in the overall scope of the album’s vibe.

“Sinkorswim” has popping bass jumbling through a foggy jazz beat, and succeeds at not really being a song at all. Malkovich’s gritty voice doesn’t feel much responsibility to the beat, and the beat returns the favor. Both trudge gamely on, doing adequate jobs, but not coming together and making a song proper. It’s an experiment, and though it doesn’t exactly work, it does contribute to the dark vibe of the album, as do the scattered instrumental interludes. Otis Redding is a harbinger of doom in a “Quartertothree,” a minute-long a track dragging you deeper into the swampy blackness of “Skeletons”.

The title track drips the album into deeper dankness, ABCDEFG sculpting a careful cohesive soundscape-like beat for Malkovich to ramble over. The track is hard to grasp, so many gimmicks are tossed in. His voice is reverbed the hell-out, and the verses are cut with movie clips. Still, it’s good, if not transcendental. There is so much quality in what he’s doing, but it falls short of really delivering. It’s never clearer than on his less abstract efforts.

“Eventually” was just lifted wholesale from an Atmosphere album. Malkovich’s dulled monotone can’t get away with lines like “I walk through life with my heart on my sleeve, but ya’ll, women just rip it apart and leave,” the way Slug, with his almost embarrassingly sincere delivery can; and that seems to pinpoint the problem with the album as a whole. Malkovich sounds like he’s talking about life, about death, about himself, because that’s the cool thing to do these days, not because he’s got that burning need. He’s a rapper, and he’s doing what rappers do. Once, that was smack bitches and pimp hoes. These days, it’d just as likely be talking about how fragile your emotional psyche is. It may just be that he maintains such a consistently dark tone that you can’t help but start searching for chinks in his gloomy faÃ§ade, a sign of inauthenticity is actually a ray of hope.

There are few guest appearances on the album, and that can be a good or a bad thing. Considering the jolt with which I popped my head up when I heard Milx kick off “Everything’s Perfect”, the album’s heavy drapes could use a lifting by a few more guests. The chorus to “Everything’s Perfect” is Malkovich tiredly droning the title itself. “Everything’s Perfect”, to my surprise, is an ironic title! Nothing is perfect! You dog, Malkovich! But that’s the same joke over and over again, that we’ve been hearing since track one. It’s a perfectly beautiful Sunday morning (well, add another 30 degrees to the thermometer and it is), and I’ve subjected myself to an entire album of funeral dirges. But what a difference there is between a good dirge and a bad one, and Malkovich is really more often good than not.

The album is an all-or-nothing investment. It builds cumulatively. No single track will knock you out, but if nothing else, the sheer persistence of Malkovich’s dark vision will force its way to some deep-seated nerve of melancholy (don’t we all have one?). I may not be in the mood now, but I certainly have been, and sometimes there’s nothing better than an hour-two-minutes of unfiltered depression. When that time comes, I’ll give “Skeletons” a spin â€“ and slit my wrists.