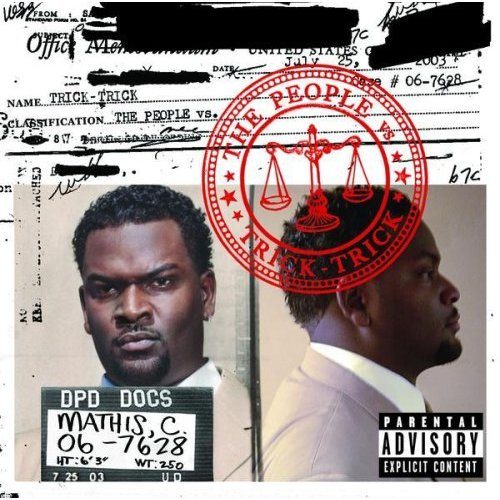 Trick Trick :: The People Vs.

Aside from a striking physical similarity to Vince Young, Trick Trick has a few things going for him. An affiliation with Eminem is not what it once was, but two appearances and two beats from Mr. Shady is nothing to scoff at. Jazze Pha also drops by on “The People Vs.,” and Obie Trice and Proof tag alongside Eminem as well. Upon hearing that Trick Trick is from Detroit, I began to wonder if he is really that buzz-worthy, or if he hooked Em through the motherland connection.

A search through good ole Wikipedia alerted me to the fact that Trick has moved crazy units in his rap career, which started in the mid-nineties. His public enemy image is not made-up either. He has been arrested twice for murder, spending significant time in custody until being acquitted in both cases, which were a decade apart. The opening track, “M-1,” is a ferocious exploration of these events, and he candidly attacks the details of the crimes as a defense lawyer might. It’s easy to write him off as aiming for street credibility, but he certainly has a bone to pick. The hook is the most powerful aspect of the song:

“You can’t get me, trying to convict me
But you can’t stick me with an M-1
Prosecution against me, cops want to clip me
Judge is against me, I’m the wrong one”

Trick Trick is most memorable because of his voice, a barely contained growl that resembles DMX with more sincerity. The hook to “M-1” is a tense, slower medium for his throaty roar.

“Welcome 2 Detroit,” the lead single, features Eminem on the mic and the boards. The affair as a whole is a slight disappointment, as Em can’t manage to construct an indelible beat for the occasion. Neither his verse nor his hook is remarkable, although the song certainly can’t be categorized as below average. Trick Trick’s overwhelming vocals steal the show, for better or worse. Here, his words are quite formulaic, but of course it’s mostly the voice that gets you up.

The endlessly strange “My Name Is Trick Trick” has a syrupy hook, and he harmonizes admirably with the melody. Each verse is a study in contrast against the chorus, as Trick commands the beat here without even trying. The most notable aspect is the production, laced by Trick himself, which is eerily catchy and ably bridges the differences between the pillowed hook and the jagged rhymes. The Jazze Pha collaboration isn’t remarkable, but the minimal beat adds several pleasant elements when the hook approaches. Trick Trick seems to be trying not to say anything of consequence, however, because his rhymes tread territory that is well worn in rap these days.

Several standard concept songs are thrown into the mix, and despite their lack of true originality, they deviate pleasantly from the flatter material on the album. “Lady (Let You Go)” is an ode to his baby’s mother, and Trick demonstrates a jolting sense of remorse, especially on the hook. “Let’s Roll” is a simple little song about getting the night started, and Mr. Porter gets a moment to shine as well. “Get Bread,” though, is the true banger of the second half, with a viciously bouncy beat from the artist himself.

With sixteen full-length songs, there is plenty of room for filler, and plenty of weaker tracks pop up. There’s nothing too horrendous to report, just a handful of cuts that could have easily been excluded. “Sucha” exemplifies this, with a truly mediocre beat and a continued insistence on attacking haters in bland fashion. “What the Fuck” has an excruciating hook that consists of Trick Trick screaming the song’s title without remorse. It doesn’t get me amped, and I can’t imagine why Trick thought it might. To make things worse, the guest, Miz Korona, adds almost nothing.

There’s some goodness on “The People Vs.,” but the production is not at all unique, consisting mostly of bland drum kicks and some of the expected bells and whistles. A piano loop here, a string section there, and some extra bass to shake the trunk. Trick Trick is an adequate rapper, with his voice carrying most of the slack that an absence of complicated themes leaves behind. Nothing spectacular manages to take the focus off of the weak points, though, and the concept songs are not vivid enough to fade his vaguely violent and money-flaunting words from memory. Look for a couple of tracks to blow up, but check the iTunes store for singles before searching out the full-length in stores.