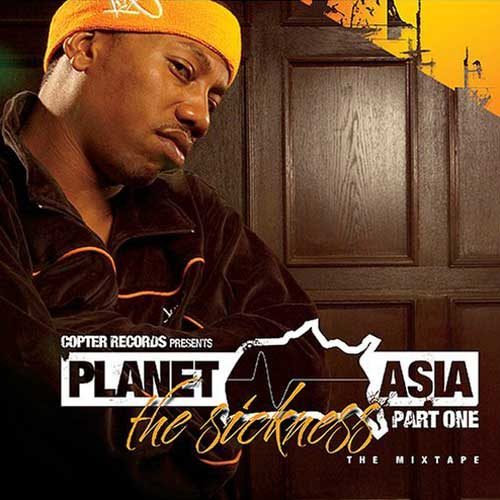 Planet Asia :: The Sickness, Part One

Straight outta Fresno, crazy motherfucker named Asia. From the gang best known as Cali Agents. Even better when solo though, and when he hauls off, his lyrical flow will blast your drawers off. If you’ve followed his career from the late 90’s through 2004’s “The Grand Opening,” you already know Asia is one of the most underrated MC’s in the business today. Asia fiends for microphones like Rakim, but rocks with a voice that often sounds kin to GZA. The similarity to Wu-Tang’s cerebral assassin doesn’t end there – Asia is deadly serious about his lyrical craft. The fact his newest release is called “The Sickness, Part One” ought to strike fear into lesser MC’s everywhere, since two parts together might overthrow hip-hop from West coast to East coast and all points beyond.

Before getting too far ahead of ourselves though, one has to know whether Asia came correct with his first section. Ice Cube was once just as feared in hip-hop, but after releasing two volumes of War & Peace the once dominant California king found himself better suited to acting in Hollywood. Rap historians can debate about whether or not he truly fell off, but there hasn’t been a full album of new music since. In case you thought this review was going nowhere with all the allusions to N.W.A, particularly since Asia spits a completely different style more akin to rap cyphers than drivebys in South Central, it’s Asia himself who put it out there on “The Sickness” by doing a song called “Gangsta, Gangsta.” What’s gangsta to Asia though?

“Fuck the whole establishment, I got the kids in my back pocket
Fuck a pagan Jesus, worship the black prophets
With that knowledge I can stack dollars
And act Midas when I tap wallets, to give it back the hardest
Now that’s gangsta nigga, face it
Find me in a spaceship, with them true blue paper getters
With an eighth and some liquor, to the face I’m official
To your face I might diss you, on my waist is a pistol
Malcolm X, Marcus Garvey, Martin Luther King – it’s gangsta gangsta
Gangsta gangsta”

That’s what type of shit Asia is on. Intelligent and articulate, thinking about the future, but determined to get his hustle on and survive in the here and now. Combine Planet Asia with the right beats and you can feel an earthquake shake from both the reverberating bass and the heads who scatter in his wake, best described on “Gold Chain General” by the man himself: “Gold Chain general, with Murder Dog interviews/your whole album, couldn’t fuck with my interludes/Dude, I’m like a monster, boy/young independent black entrepeneur.”

With everything that Asia has going for him as a brash smooth flowing West coast rap don, there’s still a problem with “The Sickness, Part One.” When you proclaim that someone’s whole album couldn’t fuck with your own interludes, you’d better back it up with the rhymes AND the beats. Not only do a lot of Asia’s tracks miss the musical mark, some of them sound like weak rip-offs of other people’s styles. “Fight to the Flo” featuring Rasco should have been a great combination, but it’s not just the song title that seems borrowed from the Dirty South. It’s half David Banner and half Three 6 Mafia, and not the better parts of either’s style. “I Do This” has some chopped up synthetic horns in the breaks, which would be bad enough if the weak drum track wasn’t some thin hand claps mixed with a bass that growls like a dog on chemotherapy for lung cancer. Speaking of dogs, the only thing “Murder Time” proves is that Asia needs to leave reggae riddims and whack chattas like Madd Dogg the hell alone. Asia’s speedy flow on the second verse is proficient enough to fuck with Twista in a rap battle, but the song is way too irritating on the whole to check it more than once.

Unfortunately a mixture of acceptable beats with mediocre ones isn’t the sole problem with “The Sickness.” On the last album Asia fucked with a variety of high quality guests whose caliber was equal to his own from Ghostface Killah to Goapele. On his latest release most of Asia’s guests are unknowns to me and quite possibly in Fresno. I recognize that’s part of Asia’s hustle since he’s clearly trying to establish a “Gold Chain” imprint of some sort and they’ll probably form the roster, but they’d have been better served on a compilation of their own instead of diluting the amount of Asia found on his own release. Things are okay through the first six tracks, but then feces hits the rotary blade. I’m not sure which one is Killa Ben and which one is Mitchy Slick, but one sounds like a Killarmy reject and the other couldn’t hang with Yukmouth on his worst day. “Baby Food” is one of the album’s better tracks, but instead of three verses of Asia he has to share billing with Sav Skills and Tri State. In fact other than Rasco the only guest of any quality to be found on the whole project is Moka Only, who blesses “Time After Time” nicely over an Architect beat:

“I come at you on a personal level
Some regular, every day shit, my life’s another kettle of fish
altogether and this reflects in me and the tunes we create
Under moons let me get me that respect that been missin
Select your position to be in
I’m stuck in ninety-two like a museum
On some cool Grand Pu’, Brand Nubian shit too
But forward to the future, let me do what I do”

Planet Asia is still bar none one of the best in the industry when he’s presented correctly, but it’s possible that on “The Sickness, Part One” he forgot to promote himself and spent too much time spreading the wealth. Such generosity is rare in hip-hop these days and to be commended in general, but that doesn’t necessarily make for a hot album. If Asia will go back to his roots and focus on putting himself over instead of lesser MC’s for “Part Two” his mistakes here will soon be forgotten.