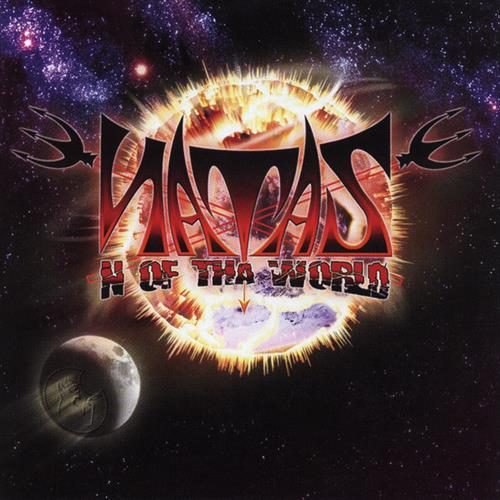 Surprisingly Natas’ front man Esham has gotten absolutely no love from RapReviews up until this point. Hard to believe a man who was at the forefront of the horrorcore and acid rap movement and has well over 15 albums under his belt has yet to be reviewed once. Thankfully for Esham, he doesn’t necessarily need coverage from us or anyone else to sell records. As somewhat of a cult hero and underground influence to everyone from Eminem to Kid Rock, Esham has flourished during his long career. From his first attempts at rapping in Amityville, New York (yes, THAT Amityville) Esham’s style has evolved into a rap-rock hybrid full of haunting themes and high-energy, if sometimes simple, rhymes. Natas finds Esham teaming up with TNT and Mastamind, but continuing the same trend of hard-core rhymes and beats that Esham exhibits on solo albums. “N of Tha World” changes the pace of usual Esham/Natas releases by infusing some strong political and social messages into the album.

The album starts off with a track that sounds like it could be in Run-D.M.C.’s catalog. Over heavy guitar riffs and a bass heavy beat the group introduces itself on “Natas.” Natas follows up the rock-rap hybrid with a surprisingly soulful beat on “Dead Men Don’t Sing.” Despite the beat’s soulful nature, the topic matter is dark and aimed mostly at enemies and haters of Natas. The rock element returns on the catchy, but somewhat disturbing, love song “Worlds Apart.” “Long As I Live” spells a return to Natas’ more soulful side, though once again the topic matter stays true to the group’s horrorcore roots. The mix of softer beats with hardcore lyrics is a shock to the system initially, but after a few listens the odd combination sounds fresh. One of the album’s best songs comes in the form of the hustler’s anthem “Pancakes and Syrup.” The track is experimental in the sense that the beat isn’t the most conventional and is played at regular speed yet it is paired with screwed verses. The group’s horrorcore nature shines brightly on “Full of Hate” where TNT proclaims:

“Nightmares” finds the group being more reflective explaining some of the reasoning as to why their music can be so dark at times. “On My Own” is Esham’s anthem and homage to his own hustle in the rap game and also his declaration that he has his own problems and issues he deals with on a daily basis. The rest of the album wavers between straight horrorcore tracks and deeper songs where Esham puts his own twist on issues that come up a lot in rap. “Trouble and Pain” is a track dedicated to the mean streets of Detroit where Esham grew up and the problems faced there. “Crazytown” is another soulful track which finds Natas being critical of the current social state among other things.

Overall “N of Tha World” is a decent effort from one of the underground’s most overlooked MC’s. Lyrically, Esham is the most refined rapper out of the group, but TNT and Mastamind hold their own providing decent supporting verses most of the time. Musically, the production is top notch throughout, though the average hip-hop fan will recognize a few of the samples used on some of the beats from previous songs. From my limited knowledge of Esham and Natas albums (I own 2 solos and Natas’ last release), “N of Tha World” isn’t their best release overall, but definitely a solid showing. Natas’ sound is an acquired taste as those not fond of rap and rock mixing will probably be put off by tracks like “Why You Gotta Lie.” As a rap-rock group, Natas is probably as good, if not better, than most rappers or rockers who have given the genre a go. Being the pioneers of horrorcore, Natas definitely presents some of the better music out of the genre as they inject their music with social messages and stray from completely pointless songs. Natas aren’t the best rappers, but are definitely better than the average thug rappers that have flooded the game lately. “N of Tha World” may not break new ground, but for most of today’s rap fans it probably is on some different shit and therefore recommended for anyone looking for something fresh but not too abstract.