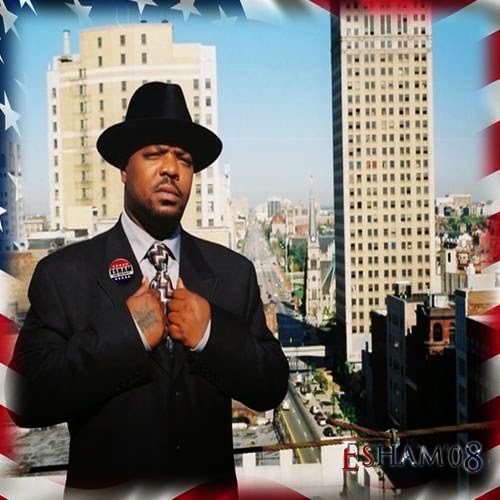 Esham is running for mayor. Seriously. The man has released a mixtape which all his fans initially thought was little more than a concept album meant to play off the recent presidential election. Esham surprised us all by declaring he was dead serious about running for mayor of Detroit. In a way it makes sense. Given the drama that followed the last mayor in the D, Esham surely could do no worse. Considering how many fans and followers Esham has created with his brand of acid rap, it’s not entirely impossible for him to create a following behind his mayoral campaign. Regardless of the end result, Esham’s mayoral dreams have lead to another free mixtape with 5 tracks.

The intro, “First Day In Office,” is complete with Detroit political references and threats to “vote or die” that sound real menacing coming from the original boogieman:

“First thing I’ma do when I get in office
Is let you motherfuckers know who the boss is
Cross this you can hit the deck
Peace to Monica Conyers, anything but Shrek
And I ain’t no nerd, fuck what you heard
I’m from Detroit city, not the suburbs
Whole life a vacation from a public education
Now the youngest mayor in the whole entire nation
Respect my patience, I ain’t gonna kill nobody
Unless they come to Detroit and don’t know how to party
I ain’t satisfied until I see my city come up
I can’t sit back and shut up and just dumb up
I’m running for the mayor and don’t ask me why
Only thing you should do is just vote or die”

The music is on some hard-hitting, yet smooth vibe with a twist of g-funk thrown in for good measure. Next up we get “You Better Vote” which once again is one some down right catchy tip with its melodic synths and chords in the background. Even the hook is catchy and catchy music is essential in any campaign. “Party at the Manoogian” is another funky and catchy number where Esham promises to put you on his Christmas list if you vote for him and shouts out Kwame Kilpatrick. “The Real Issues” is just that as Esham does nothing but speak on what he thinks are the real issues in his hometown. “Keys to the City” is the last track and steals the beat from MIA’s “Paper Planes,” which I must admit is a dope beat. Esham once again mixes his own political ambitions with requests for votes and endorsements for Obama.

Though very short, Esham’s latest mixtape is pure heat and should please fans. You can’t beat the price, but thankfully the man doesn’t let the quality drop just because he isn’t getting paid. Though I seriously doubt the man will ever get elected as the mayor of Detroit, I must say his campaign and the music it produces intrigues me. With the presidential race over, this might be the most exciting political race for the next few years. You’ll be entertained by a candidate who talks about killing the fetus, selling coke, and curses all the while promising to improve his city. Rap fans far and wide should be inclined to tune in, if not to support the man then to get in on some free music.