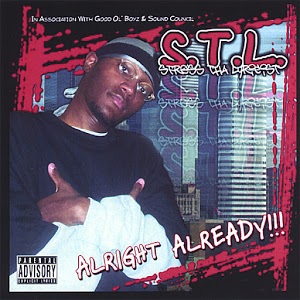 A couple years back on RapReviews, Tom Doggett came through with coverage on a newcomer to the rap scene named Stress Tha Lyricist. If you’ve never peeped it, I urge you to do so before checking out my take on S.T.L.’s new album. It’s downright hilarious how perplexed Tom seems to be by the fact he likes Stress, even saying “something is amiss” when he’s forced to admit some of the song’s on the album are absolutely brilliant. Throughout the review he continues to search for answers and is ultimately forced to admit he expected nothing whatsoever from S.T.L., but was in the end won over and finds “The Soundtrack” was actually worth the time he invested in listening to it.

I’m a relative new jack when it comes to Stress, but listening to “Alright Already!!!” I’m starting to get where Mr. Doggett is coming from. As a master of ceremonies Stress is at the very least an enigma. Since he comes from Virginia, I’m going to take the cheap route out and compare him to Pharrell Williams. While the quality of Pharrell and Chad Hugo’s production work as The Neptunes is universally well-regarded, Pharrell will never go down as the greatest rapper to touch a mic. His voice is just not there, his breath control is only acceptable at best, and the most appealing thing he does is a faux Curtis Mayfield falsetto. Why then are songs like “Frontin'” so damn good? Pharrell’s beats drag you in by force, and the oddly charismatic delivery keep you there. It’s as though Pharrell accepts he’s not a great MC from the start, which makes his raps more charming and interesting than a hundred backpackers and thugs who absolutely believe they’re the shit while simultaneously being absolutely horrid musically.

“Alright Already!!!” works on absolutely the same level. From the start Stress doesn’t really seem to have a presence that would make a name for him in hip-hop. There’s no bass in his voice, so you won’t mistake him for Big Daddy Kane or Rakim. There’s no nasal qualities to his delivery, so you won’t mistake him for B-Real or the Beastie Boys. There’s no lisp, no growl, no menacing attitude, no overwhelmingly distinctive features to his flow whatsoever. If I had to give Stress any description whatsoever, it would be that he sounds a little bit nerdy. Your typical hardcore rapper would take that as an insult, but for the topic matter Stress raps it’s a snug like a custom fitted hat. By not trying so hard to be hard, the natural charisma of S.T.L.’s personality comes off over and over throughout the album, especially given that D-Vine and Korleon provide him some tight beats. The fat bass bottom and cello samples of “Kiddin’ Yaself” make for an ideal example of the odd-but-charming style of Stress:

“Lil’ Billy wants to be a rap star
But he’s whack and he can’t rhyme, uses the same words
to end all his damn lines, can’t catch the beat
and it sounds like he can’t hear
And I wouldn’t have believed it
if I hadn’ta seen it, with my damn eyes
And his friends say he’s tight but it’s a damn lie
Now the damn guy puts a demo together
to send off to Def Jam and try an’ get him some cheddar
The execs in the place just, laugh in his face
Now this cat’s just mad and irate
So he takes an AK-47, starts blastin the place
But that’s not bad enough, so he dashes
to the gas station and starts blastin at tanks
‘Til the place goes BOOM, but it ain’t no room
for nobody to run, all of that, cause he wanted
to be a rap-per, but he was whack and Def Jam told him that
So this hoe got him a gun – ya kiddin yaself!
You’ll never be a rap star dog”

As good as the opening verse is, Stress actually gets funnier as the track goes on, knocking people who go on unrealistic diets and end up like “Mary Kate and Ashley, or whichever one was the anorexic” eventually ends up lambasting President Bush for being “a dipshit” in the finale. What emerges over the course of listening to the 21 tracks of “Alright Already!!!” is that pairing Stress with the right music results in an unusually compelling hip-hop experience, based on Stress being a naturally good storyteller who doesn’t fake an unrealistic image to impress the listener. I have to especially praise “Over and Done With,” because I don’t think I’ve heard a lovelorn rap song that refreshing since Pharcyde dropped the cut “Otha Fish.” The background music is warm and soothing and Stress has the relaxed “that’s that” flow that anybody who’s ever had a good relationship go sour can relate to:

“We met when we were lil’ kids
no older than 9 or 10
And I ain’t know what love was, all I knew was everytime we were apart
you was always on my mind again
We sat next to each other in every class
Our feelings for each other started to grow very fast
And every last friend that we had just knew that I would be yours
and you would be mine, but then…
I moved away, and it was kinda sad though
Cause we ended our relationship, on a bad note
And on top of that I never called or wrote you
In a whole four years, never saw or spoke to you
And when we finally met up again
And I got another chance, I messed up again
And effed up the friendship that we once had
And it’s bad, I just wanted to adore and hold you
But… that’ll never happen now
Cause we’re over and done with.. with.. with..
[…]
And I did what I could, to make it work
But you just seemed hellbent on makin it worse
And who knew that you would end up bein one of them chicks
I didn’t give a fuck about, we coulda worked it out
But nah, that’ll never happen now”

It’s interesting and telling that the last two tracks I reviewed occur back to back on the CD. Stress may only have one major problem on “Alright Already!!!” and that’s the production. There will be stretches of 2-3 songs where you’re left saying “that was incredibly tight, I’m really feelin Stress” and others where you say “well I kinda like his funny style and storytelling, but the shit’s not headnodding at all.” Things start out well on “Intro” the D-Vine produced “Anyway,” the unapologetically Neptunes influenced “I Ain’t Tryna Brag” and the jazzy “Official.” After that the album bogs down for a while with tracks that are just sort of “there,” not whack per se but they do nothing to grab your attention. Stress gets a little too simplistic at times lyrically, and the storytelling narrative can flip to mildly annoying. “Boy Meets Girl” takes an idea based on flipping “When Harry Met Sally” into different people hooking up with each other way too far. “In Love with a S.O.N.G.” is another case where Stress seems to be a little over the top, as “S.O.N.G.” seems to be his acronym for “Some Other Nigga’s Girl.” Sometimes a rapper can be too clever for their own good, and for Stress this is one of those cases.

There’s a lot about Stress to recommend on the whole. He doesn’t seem like the kind of artist who will ever blow up on a mainstream level, simply because his style won’t fit into any of the convenient categories MTV and Fuse pigeonhole hip-hop artists into. Nevertheless listening to weird tracks like “Good Ol’ Boy” you can’t helped but be charmed by the lines he spits: “I ain’t cut from the same cloth as y’all dudes/I’m new shit y’all niggaz old like Michael Jackson’s _Off the Wall_ grooves.” Stress seems unconcerned with whether or not he’ll reach a Jay-Z level though, and it’s precisely because of that attitude that he succeeds on “Alright Already!!!” Give S.T.L. a chance and you may find yourself in the same position as Tom Doggett and Flash – it’s not easy to tell people what’s great about him, but you’ll be hooked once you listen.