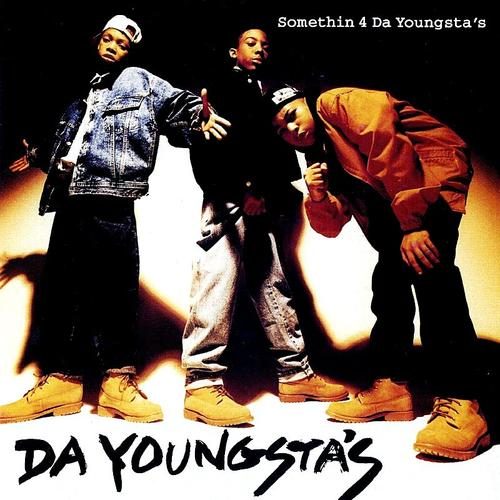 At age 20, kiddie rap is not exactly what’s on your mind. You’ve just outgrown the pubescent fantasies detailed in 2 Live Crew songs and are convinced that you have to make a contribution to the preservation of authentic hip-hop. You’re blown away by records such as Gang Starr’s “Daily Operation,” Dr. Dre’s “The Chronic” and BDP’s “Sex and Violence.” Never would it occur to you to check out the freshman effort of a cherub-faced trio of squirts that explicitly states to be “Somethin 4 Da Youngsta’s.” But as it happens, years later you end up picking up the release anyway at a reduced price. Meanwhile, rap’s fascination with all that is not particularly suitable for children doesn’t wane. You finally reach an age where you could be the parent of a curious child yourself, and suddenly you start thinking about the type of music you would want your own kids to grow up with. You know that one day they will inevitably create their own musical movement, but right now they’re intrigued by Eminem. They’re barely old enough to listen to what daddy and mommy say, but they’re already hanging on 50 Cent’s every word.

That’s when you start looking at a record like “Somethin 4 Da Youngsta’s” from an entirely new perspective. Da Youngsta’s consisted of brothers Qur’an and Taji Goodman and their cousin Tarik Dawson. Qur’an and Taji were the sons of Lawrence Goodman, who together with his own brother Dana ran Philadelphia’s Pop Art label, in hip-hop best known for releasing a string of mid-’80s Marley Marl productions and acting as intermediary between DJ Jazzy Jeff & The Fresh Prince and Jive on their way to superstardom in the late ’80s. With Da Youngsta’s, Goodman (also dubbed LG The Teacher) pioneered what others with a position in the game have since attempted – to offer their offspring a rap career. It’s hard to tell how much of a hand Peter Gunz and Tomica Wright have in the development of Cory Gunz and Lil’ Eazy-E, but what’s for certain is that the one who has been the most ambitious about it is Master P, who tried to break his son Lil’ Romeo as an alternative to Lil’ Bow Wow. The exact age of Da Youngsta’s at the time of their debut is not known, but a safe guess would be something between 11 and 13. That would make them older than some and younger than others of their ilk. But the point is that they fall squarely into an age bracket when kids become individuals, gradually learning about responsibility and independence. It’s a period just before puberty, when children are old enough to vaguely understand where their parents are coming from, and too young to rebel against them on their way to adulthood.

That’s the only logical explanation of what’s going on on this record. Da Youngsta’s are every parent’s dream. On the opening title track they do complain about strict rules, but at the end of his verse, each rapper admits: “Mom knows best.” Where The Fresh Prince made us laugh about the fact that “Parents Just Don’t Understand,” Da Youngsta’s argue that parents may not always understand their kids, but that they always know better. If it wasn’t for the fact that Qur’an, Taji and Tarik obey only reluctantly, “Somethin 4 Da Youngsta’s” would be so patronizing, only Rod and Todd Flanders types would fall for it, but certainly not the Bart and Lisa Simpsons of this world. But thanks to the relatively sophisticated songwriting, there’s actually something like a moral to the story. For instance when Tarik quotes his mother as she reacts to her son’s wish to wear the latest kicks: “Son, they cost more than a phone bill / Be thankful for what you got on your feet / Some people don’t have nothin’ out on the street / Learn to be yourself, learn to be original / and don’t worry about the next individual.” Since all accounts are in the past tense, the listener can’t tell whether they’ve already outgrown this phase. However, that much is clear – Da Youngsta’s are supposed to be a role model for kids. With additional hints at corporal punishment from moms, this track is a great piece of parental propaganda.

The rhetoric and reasoning continue along these lines. On “Street Smart” Tarik raps, “I was raised to respect my elders / and if I didn’t, I would wind up as a failure.” With so many dysfunctional families inspiring rap songs, it’s actually quite refreshing to hear a father say, “Me and your mother will be in through thick and thin / cause when it comes to it, we’re like your best friends,” while his son acknowledges, “I took his advice, and it did me some good / Now I’m not a product of the hood.” Equally clever as the title track, “Street Smart” dares to be different and gives its own definition of street smarts. Third in line is “Rated PG,” which, far from being as eloquent as Heavy D’s “Don’t Curse,” acts as a simple advertisement for this piece of radio-friendly rap: “Parental discretion is not advised / you don’t have to cover your ears and close your eyes.” Matter of fact, not even parental guidance seems suggested in this album’s case. Although, the addiction to toons they profess on “Cartoons” would probably not be approved of by all parents. “Neighborhood Bully” on the other hand is everything you expect from rappers who don’t aim to be bullies themselves. Still, fueled by Kool G Rap and Big Daddy Kane samples, “Tuff Cookie” brings out the heavy artillery with unusually threatening lines like “Step to this and pay a visit to the hospital,” “Goin’ up a sucker’s mouth like a orthodontist” and “I never come off soft, I ain’t feminine.”

That’s probably why they try hard to probe girls’ minds on “Y Ya Tryin to Play Me.” Nothing wrong with showing your softer side, but the way “I Didn’t Mean 2 Break Your Heart” combines schmaltzy “I Need Love” whispers and hip-hop-inspired dance pop certainly doesn’t reduce the bubblegumness of “Somethin 4 Da Youngsta’s.” Out of 11 tracks, only “Pass Da Mic” has universal hip-hop appeal, as they get lyrical in a cipher-like environment, inspiring Pete Rock to do a remix and DJ Premier to sample Qur’an’s line “Once again I reveal the skill / Money’s growin’ like grass with the mass appeal” for Gang Starr’s “Mass Appeal.”

One of the dopest cuts, “Reminiss,” is somewhat of an oddity as it is one of the earliest back-in-the-day type trips down memory lane, but told by someone who’s not really supposed to feel nostalgic about the good old times yet. Which brings us to the subject of ghostwriting. The songs on “Somethin 4 Da Youngsta’s” are credited to two main writers, Lawrence Goodman and Emanuel Parks, the latter guesting on “Pass Da Mic” as Mentally Gifted and also being credited for co-production and cuts. It’s quite possible that Mentally Gifted, probably a few years older than Da Youngsta’s, wrote all of the album’s lyrics.

Surely some amount of skepticism is in order when listening to such an obviously manufactured rap album. At the same time there’s no point in holding kids their age as creatively responsible as adult rappers, especially since they display a lot of responsibility in terms of content. The inspirations they list in the liner notes (Kool G Rap, Ice Cube, Naughty By Nature, Brand Nubian) weren’t always age-appropriate, but when they also thank their uncle and father, you get an idea that these kids weren’t solely raised by rappers. Considering how the fast life and big bucks and the way they both are promoted in rap music continue to corrupt the minds of young people, “Somethin 4 Da Youngsta’s” is a well-meant countermeasure. Da Youngsta’s would go on to release several more albums with a decidedly different approach, but that’s for another review.