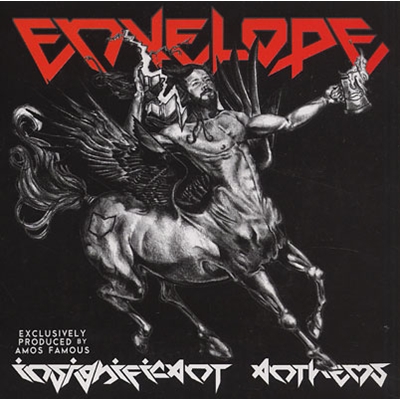 I’ve run across some pretty crazy album covers in the last few weeks. If you ever run across a CD with a winged Centaur holding two pints of draft in his hands as the cover art then you’ve just had your first experience with Ohio MC Envelope. While Envelope’s taste in artwork is honestly weird as hell, his album is actually a down to earth and straightforward account of his experiences so far.

The album’s beats are handled by Amos Famous and consist of mostly jazzy and soulful riffs over subdued drums. It’s a true and tried formula, but Amos pulls it off well delivering a set of noteworthy tracks. “Good Good Lord” is an uplifting track featuring a smooth bass line and driving horn loop. Amos turns to a bluesy piano sample on “I Decline” and couples it with a dope vocal sample for the hook. “Stay Gold” features a very familiar soul sample and makes for a smooth uptempo track. The rest of the album’s production maintains the same high quality with only a few missteps, such as the simple and boring arrangement on “Involuntary Actions.”

As an emcee, Envelope is a very honest and straightforward rapper who isn’t afraid to tackle unconventional topics. He tackles religion on “Would He Be Like You” and gives the track a unique twist with the child sung hook. “Do You Believe?” tackles the issue of media influence though the track takes the concept a bit to the extreme. Other noteworthy tracks include the uplifting “Stay Gold,” “Be Your Own Man, and the honest “I’m Not Poor.” Envelope’s ambition and willingness to tackle tough topics is commendable but ultimately he lacks as an emcee. Lyrically, Envelope gets points for his positive rhymes but his style isn’t too deep in metaphors nor is he adapt at vivid storytelling. His rhymes also end up sounding very preachy at times. Flow-wise, Envelope’s style sounds a bit forced and unnatural. His strengths and weaknesses are apparent on “I Decline” where he addresses a deep topic but comes through with lackluster lyrics:

“I consider myself a law-abiding citizen
Which makes me wonder why I am sitting in
The back of this cop car trying to listen in
On the two officers deciding my condition
It’s pissing me off to say the least
Asking me why I’m out this late in the street
Man they tried to pin me as a major thief
But I ain’t taking the bait â€“ I â€“ See
They got no evidence that’s touching me
But they acting like my rights is a luxury
Shit like this happens too much to me
That’s why my generation says +Fuck the Police!+
But most of them is OK dudes
They ain’t all trying to ruin the day for you
But I got to make it harder with what I say
‘You wanna take me downtown, fuck you! I’m not afraid'”

He’s not an amateur by any means and is competent on the mic, but his voice and mic presence lack the natural ease and smoothness possessed by more experienced emcees.

“Insignificant Anthems” shows a lot of promise from Envelope. The beats are mostly dope, thanks to Amos Famous, leaving the task of making or breaking the album on the young emcee. His performance doesn’t do the album a disservice, but does show a lot of room for improvement. In the future, Envelope could definitely be an emcee to check for, but for the time being the biggest things going for him are his positive attitude and dope beats.