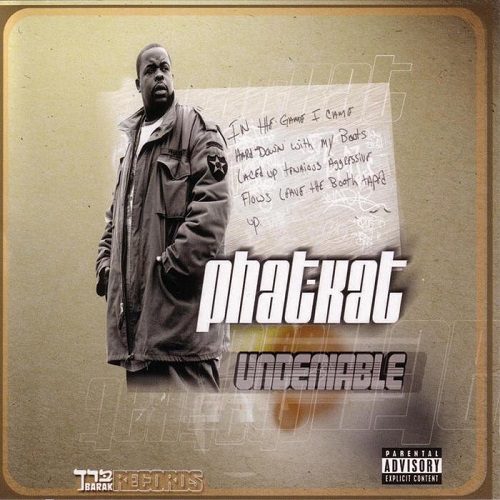 What follows is a review of Phat Kat’s “Undeniable” LP. This is a great chance for you to get to grips with what you can expect from the album. Stick it on while you read this, while you play around at Poker.dk, even when you walk to work so you can get a real feel for it. We hope you enjoy the review and can relate to what we are saying.

Wildcats are predators. They prey upon innocent zebras and wilderbeasts so that they can sink their destructive claws into warm, juicy flesh to fulfil their insatiable hunger. Their reflexes are optimized to make them prototypes of the fiercest creatures in the animal kingdom. The highlights of most wildlife TV shows consist of limber big cats chasing after their next meal. But sometimes, footage is shown of how those same big cats spend their time when they’re not hunting. They hang around like unemployed couch potatoes, unwilling to move a muscle unless it’s truly necessary. It is in this state that we caught the predator Phat Kat red-handed when he made his debut album: “Undeniable.”

For his first official album Detroit veteran Phat Kat decided to go with a production team that represented his own Detroit sound in the best way possible. “Undeniable” was almost entirely produced by two young upcoming cats, Black Milk & Young RJ, better know as production tag team B.R. Gunna. Phat Kat did some earlier work with B.R. Gunna on Slum Village’s “Detroit Deli” and apparently, he liked what he heard.

Unlike that banging piece of work they almost entirely produced for Slum Village, this album is a complete misfire. B.R. Gunna’s drum samples are downright boring and after a couple of songs you’ve memorized the electronic melodies covering the backbone bassline and start to think: Next please! Even longtime friend Jay Dee doesn’t succeed in pulling Phat Kat from this musical swamp. The three tracks he produces on “Undeniable” are noticeably of better quality, but certainly aren’t his best work around. “Dedication 2004” is the best of these three productions, with a dusty snare and a nice, mellow synthesizer sample.

Ever since he first blew up onto the local scene, Detroit resident Phat Kat AKA Ronnie Cash has been somewhat of an eternal promise. When the Detroit sound was virtually non-existent, Phat Kat was one of the first artists to land a major label deal (thanks to advice given to him by Gangstarr, whom he met in a local record store) together with his companion and soon-to-become legendary beatmaker Jay Dee. Under the name 1st Down they appeared on the compilation record “Representin’ the Street” that was put out by Payday in 1996. This label was also responsible for classic records like Jeru the Damaja’s “Wrath of the Math” and Group Home’s “Livin’ Proof.” After making just a couple of tracks the group fell apart, but for one of the first times people noticed that hip-hop had also gained a foothold in Motor City, Detroit.

Throughout the years Phat Kat’s and Jay Dee’s careers have been connected like a Siamese twin. Ronnie Cash made an appearance on the first Slum Village album, “Fan-tas-tic Vol. I,” did a couple of twelve inches with J. Dilla’s production backing him and also did a song on Jay Dee’s official debut album “Welcome to Detroit.” Kat also toured with quite some heads who turned out to be headliners or already were just that. He opened up for A Tribe Called Quest during their farewell tour and joined the Okayplayer camp for their 2001 tour, mostly thanks to Slum Village.

Then, after years and years of building up a buzz, Phat Kat demolished that buzz single-handedly in 2004. It’s a shame the Detroit rapper didn’t put more of himself into his own debut. Most of the tracks on the “Undeniable” focus on the typical thug-in-the-club topics. Shaking booties, fly gear and miscelaneous inferior MC’s are all packed into none too complicated punchlines. The necessary sense of humour to accompany these type of lyrics is pretty much absent. The big guy makes somewhat of a mockery of himself when he takes himself so serious in this cliche-a-thon:

“Let me show you how live, I get
Phat Kat stay dipped up in the flyest shit
I get it free while you silly niggas buying it
Po-lo and Tim-bo, they supplying it”

“I stepped in the place and this fly queen caught my eye
We exchanged numbers
Mid September, it was the end of the summer
I wondered if she really interested in Kat
The fly rhyme, clothes, the phat bankrolls
Hoes know for me to pack
Cause I think back about the previous two
And all that bullshit them hoes just took me through
Now I got a brand new queen by my side
Who provides and supplies me with real love
And appreciates the footmassages and backrubs”

And in “VIP In” Phat Kat talks clubs:

Phat Kat wouldn’t be the only artist who focuses on these topics and still makes a banging album. Unfortunately he doesn’t rise to the occasion. It is a bit frustrating that an artist that has been rumbling in the underground for so long makes the same mistakes that any rookie crew out of Wisconsin would make. The sheer existence of this album is undeniable, that’s for sure, but what it should be confirming totally mystifies me. Undeniably, Phat Kat possesses more talent than he shows on “The Undeniable LP”. With his aggressive tone of voice and his sharp delivery he missed out on confirming that he has it in himself to be one of Detroit’s finest MC’s. Back to The Discovery Channel for now, I guess.