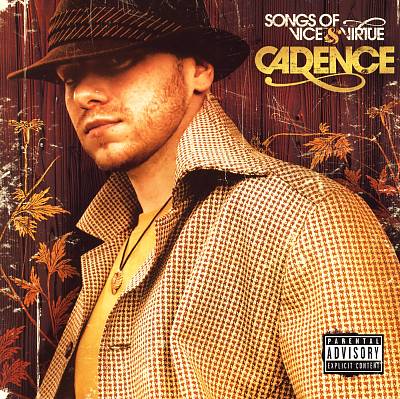 There is a reason that as a critic I listen to an album multiple times and in different situations before I sit down and write about it. Cadence’s “Songs of Vice & Virtue” is a perfect example of why such a process is ideal. I absolutely hated Cadence upon first listening to his CD, I flipped through a few tracks and immediately popped it out of my stereo. A week or so later I gave him a second chance and the result was me feeling almost every song on the album. The difference was the fact that the first time I popped in the CD I was in my car and was in the mood for something a little more ignorant to shake my trunk. The second time I was on one of my many weekly bus rides through the city and Cadence’s music was the perfect soundtrack for the movie that was displayed through the bus’ large glass windows. Hailing from Nashville, Tennessee, Cadence comes through as almost the exact opposite of gritty G-Unit rapper Young Buck. Replacing threats with advice and empathy with sympathy, Cadence shows that conscious rappers don’t all come from New York or the Mid-West.

As an emcee Cadence doesn’t necessarily possess the raw lyrical ability of rappers like Mos Def or Common, instead he relies on lyrics that on the service may be relatively simple, but combined with Cadence’s voice and superb story-telling skills convey a lot of emotion. A perfect example can be found on one of the album’s strongest cuts, “Still Here:”

“When I see a young cat that’s not hard on his grind
I see a star that’s refusing to shine
And part of the time it seems to me
That he makes it easier for me to succeed
But, that’s that crab in a bucket mentality
And I should treat dude like family
‘Cause what if that was me and the pressure had got to me
I would need somebody to reach out to me
Yo, this stress ‘ill be the death of me
I can’t let y’all get the best of me
Me and this rap shit is destiny
I knew coming in they weren’t going to like it
Losing they number one position to a white kid
But what do I care
I got mouths to feed just like you
I bleed just like you
See, that make us the same, god
Plus on top of that we both serve the same god
I know the game’s hard, but we survive
Toast to yourself, hold it high”

Cadence’s raw honesty and emotion in delivering his verses overcomes any simplicity. The only problem with this particular verse is the unnecessary reference to the struggles of being a white emcee, being that in today’s game it’s a non-factor if not an advantage. On other tracks Cadence continues with heartfelt lyrics and at times dope concepts to further strengthen his skills. Track’s like “Here I Am” are soulful and emotional tales of his trials and tribulations. “So Original” finds Cadence mocking everything that is popular on current tracks and poking fun at what emcees do for radio play. The irony is that in his attempt to mock that type of song he created his own catchy track that could find its way on the radio. “All Fall Down” is a deep and almost depressing song that once again shows Cadence’s above average story telling skills. The only track that falters on the album is the “party” anthem “Squeaky Clean.” The song comes off as a Timbaland impersonation on the beat and the concept has been done better by the likes of Del The Funky Homosapien.

The production on the album is done by currently unknown producers, but it is clear that they are masters of their craft. The album’s main contributor is Scott Zarific who, outside of the aforementioned Timbaland rip off, provides Cadence with the perfect sonic backdrop. The tracks embody a mix of electric guitars, acoustic guitars, and other live instruments that give each track a warmth and feeling that matches Cadence’s emotion on the mic.

“Songs of Vice & Virtue” is a refreshing album that will hopefully give Cadence more exposure. While I am sure he didn’t make the album with a pop crossover in mind, his style of rap is actually the perfect match for the teen/young adult demographic. At times his music is probably too socially conscious for the average music fan, but his emotional tracks are of the type that tend to strike a chord with young Americans. But outside of possible crossover appeal, Cadence is a cat that should definitely be peeped by anyone looking for some good, genuine music and head-nodding beats to match. With time Cadence will hopefully develop his craft even more and evolve as all artists do, but even today he’s a cut above the average emcee.