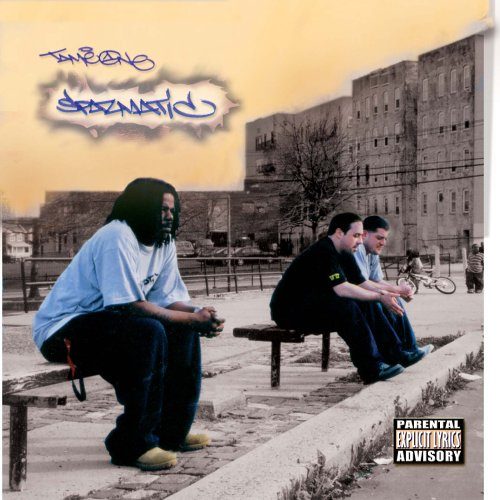 Rap music is all about the beat. It’s what hooked me from the start, a grinding, repetitious backbone to every song that resembles a heart’s pump. The title of this album, from prolific Newark emcee Tame One, reflects the album’s take on this musical tradition. “Spazmatic” it is, a varied ride through the wacky programming of the producers Xing and Fox. Tame One matches their spastic drums with his voice, following their lead with admirable dedication. These aren’t weak computer drums, or chopped and sampled drums, but the booming hollow echo of “The Bridge,” arranged so that melodies can be used sparsely without boring the audience.

In the wake of such explosive production, it’s actually Tame One who steals the show. With “more consecutive bangers than Los Angeles hoods,” he attacks the mic using the unusual production as a launching pad, an excuse to do something different. “I Just Rock” opens with a thumping beat augmented with various faint samples, none of which takes the focus off the drums. Tame One displays pure lyrical skill, dropping a lightning-quick battle rhyme that reflects the song’s title. This is Tame One’s focus throughout. He uses the guise of a throwback album to avoid any thematic creativity, but this doesn’t matter because he rhymes so well.

The old-school theme is somewhat unsaid, but “My Melody” clears the air of any speculation. Tame jacks the hook from Eric B. and Rakim’s classic, as well as conservatively using the whistle from the same song. There is no purpose, other than direct homage, to flipping “My Melody,” so I take this to signify their intentions on the album as a whole. This is progressive old-school rap, an update that subscribes to the same musical vision.

“I Ain’t Beat” exemplifies the producers’ eccentricity. Here, they use repetition so much that it becomes fresh, with at least five persistent loops to guide Tame One in addition to the whip of the drums. The biggest problem they encounter on the record is that the drums are simply too potent and magnified. The entire record is devoid of melody in a traditional sense. The production techniques of rap’s founders still send chills down my spine, but there’s a reason we’ve graduated to more complex and layered music. Xing and Fox manage to avoid monotony with the inventiveness their patterns contain, and with well-placed musical skits. “Dibby Dibby” bounces with a unique vibe, driven by Tame One’s vocals jumping around. Still, an entire album filled with hard, unpredictable rhythms wears on me with the absence of softer musical elements.

While the production walks a difficult line, it is still an ambitious emcee’s dream. The music is challenging yet simple, and Tame One has some serious fun with it. He completely abandons the verse-hook formula, pausing to ad-lib and let the music play when he feels like a break. “Jeruzalemz Finest” shows a lighter side of the already carefree artist:

“I roll a spliff thick as Anna Nicole Smith
Light and get just about as dumb as that slow bitch
Kool how I G Raps, catch a Black Thought and get Ludacris
Use Mad Skillz to get the loosest
No Biggie, wanna Bust a Rhyme, I’m All City
I’m a Genius, Cold Crush brothers down to the penis”

Tame One rides every beat without faltering, and he makes up for a lack of subject matter depth with pure skill. He delivers punchlines with such speed and nonchalance that even the failures can be easily ignored. Additionally, the technical aspects of each verse are impressive. He shows tight breath control and a true sense of style in his delivery.

The one thing you can’t say about “Spazmatic” is that it is boring. It is no standard entry into the rap catalogue. Both the production and the rhymes manage to peel off in different directions while staying firmly inside the average fan’s standards. This is a blessing because the record sounds new despite really not abandoning any formulas. The production is difficult to get accustomed to, though, and even when accepted for what it is, the drums pound relentlessly without a balancing melody. It is more impressive than listenable, an attractive stone statue that won’t give an inch. Check this one for something really new, but keep in mind that “Spazmatic” is more demanding than most will be willing to allow.