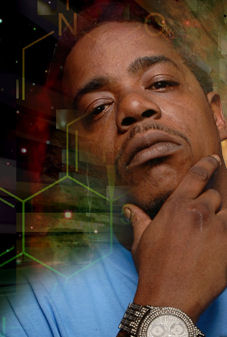 Forget sex, drugs and rock n roll, for years fans of Tame One have enjoyed hearing about his holy trinity of graff, drugs and Hip-Hop. Tame’s latest gospel, “Acid Tab Vocab”, was just released on Amalgam Digital, and while that’s making an impact right now he’s also working on an album with Del The Funky Homosapien that will be produced by Parallel Thought, a new Weathermen album with Cage, Yak Ballz, Aesop Rock, Breeze Brewin and El-P, and he’s making the necessary moves to get his label, Boom Skwad Records, off the ground. All in all, Tame One’s a very busy man, but RapReviews caught with him this week to find out more about “Acid Tab Vocab”, the reality of his relationships with drugs and graffiti, and the one moment from his career he would go back and change if he could.

Adam Bernard: Let’s start by talking about the “Acid Tab Vocab” album. Since you’re releasing it on Amalgam Digital is it going to be a straight digital only release?
Tame One: That’s what we negotiated going in, but due to the lack of enthusiasm of the first release we’re going all out this time. They said they might do CDs and vinyl if the response is good.

AB: What do you mean the lack of enthusiasm?
T1: I received little to no press for “Da Ol’ Jersey Bastard” album.

AB: And this time around, just based on the fact that you’re considering pressing CDs and vinyl you’re getting a lot more?
T1: Yes. The expectations are supposed to be off the hook so we’re gonna capitalize on it.

AB: When people listen to “Acid Tab Vocab” what kind of vibe do you think they’ll get?
T1: Well, first of all, the format is different. The mind state has definitely changed. I mean it sounds cliché, but it’s different, it’s not like everything that’s being played on the radio today. It’s not all rhyme – hook – rhyme – hook – rhyme – hook – fadeout. Hopefully the Hip-Hop head nod factor will be through the roof. Those who appreciate lyricism should be highly entertained by it, and I’m proud of it, just like I’m proud of everything I release.

AB: For those who may be unaware, you have an impressive history in music which includes Artifacts, Leak Bros., Weathermen, Slow Suicide Stimulus and your solo work. How do you feel each one of those ventures has differed?
T1: I don’t feel as though I’m catering to a set group of fans. There are people who remember me from Artifacts. There are certain people who haven’t heard of Artifacts, but know me from Leak Brothers. So it’s different. It’s almost like I’m seeking an audience.

AB: Do you think all those audiences can come together and appreciate your solo work?
T1: I like to think so. I hope so. The feedback has been great, but like I said, there are certain fans out there that never heard of the Artifacts whatsoever, they’re just now getting introduced to the Tame One phenomenon.

AB: Yeah, there are a lot of young kids out there who are 14, 15, 16…
T1: Right, right, like their older brothers and sisters may have my Artifacts material and for the most part they’re not putting one and one together going yo, that’s the same dude! It’s almost like I’ve, I dare say, reinvented myself.

AB: And it sounds almost by accident. You kept going along and you changed.
T1: Evolution is only natural.

AB: With you having worked with a litany of emcees, I’m wondering, is there anyone you’re cool with that you feel might surprise people?
T1: I just recently completed a song with Travis (McCoy) from The Gym Class Heroes. We met backstage at an El-P show. We just vibed up and he’s a real cool dude and we’re mutual fans of each other’s work.

AB: Is there anyone out there you have problems with right now, or any rumors you’d like to address?
T1: Nah, I like the rumors, at least they’re talking about me, so no. {*laughs*}

AB: And there’s no one out there that you have problems with right now?
T1: Mmmmm, real deal real life problems with? No. Other than the sucker emcees that all us emcees diss in our rhymes… but personally, no, I don’t have no problems with nobody.

AB: I know you have a lot of drug references in your rhymes, heck you have Acid Tab in the title of your latest release, and I think by now most Hip-Hop fans have become smart enough to realize not everything said on a record is true, but if you wouldn’t mind telling us, what is your relationship with drugs?
T1: I was raised in the inner city, drugs are a factor, it can’t be avoided, it can’t be sugar coated and I’m not gonna lie about it. You have certain artists, who I’m not gonna name, they bank their whole career, their whole life, on promoting drugs. I’m not promoting it, or advocating it, I’m just, for the most part, documenting things that I go through.

“I’m not an advocate, I’m not out there promoting it, I’m just doing me.”

AB: Would you say everything on the record is totally straight forward, that’s what happened?
T1: No, not even, far from it. For the most part it’s just a title and like I said, I’m not an advocate, I’m not out there promoting it, I’m just doing me.

AB: So you’re not handing out flyers saying hey, do this!
T1: Oh no, by no means.

AB: I know you also have quite the relationship with graff. Where can people see your work?
T1: They gotta go through the backstreets in Jersey. It’s not like in the early 80’s, late 90’s, when I was really active, when graffiti was my entire life. Now that I’m older I have responsibilities. I’ve been arrested for it. So most of my work, you’d have to be a Newark native and know what streets to go down and what backyards to look at. I’m still active, but my priorities have changed. It used to be I was out to bomb everything, now it’s just keepin my skills up, keeping em sharp.

AB: Are there any ways to do that without possibly being arrested? Can you just put up a wall in your backyard and go at it?
T1: In all actuality, I did. I have a little quote-unquote “playground” in my backyard to paint unbothered, where I don’t have to worry about any risk from the police, but like I said, my priorities have changed, I’m not really out there tryin to bomb shit. Mostly I stay in my black book and reminisce about the past. I’m not still out there rackin up cans and hoppin over fences and avoidin cops.

AB: What do you get out of the graffiti experience that you don’t get out of the emceeing experience?
T1: I guess it’s a mental release. I’ve been drawing all my life, so that just comes naturally, but for the most part… these are damned good questions.

AB: Thanks. Back on the subject of you, though; why do you think you’ve had the longevity that you’ve had?
T1: Because I’m not trying to portray something I’m not. I’m keeping it as real as I possibly can with myself and with my music and I guess people relate, they don’t want the cookie cutter, every day on the radio, shit. Everybody’s saying Hip-Hop is dead. Hip-Hop’s not dead, you just have to know where to look for it.

“Damn good question. Maybe I would not have signed with Big Beat and Atlantic back in the day.”

AB: If you could go back and change any one moment of your career what would it be?
T1: Damn good question. Maybe I would not have signed with Big Beat and Atlantic back in the day. I should have held out for a stronger label, or a label that was really behind me, as opposed to being naïve and trusting the people I was running with at the time.

AB: At this point what do you feel you have left to accomplish?
T1: I still haven’t made my swan song, you know what I mean? I’m expressing myself and getting things off my chest, but I still haven’t said everything that I have to say.