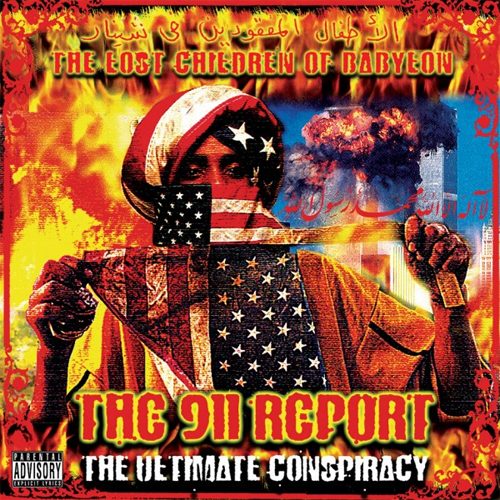 The Lost Children of Babylon :: The 911 Report: The Ultimate Conspiracy

“The 911 Report” is sure to go down as one of Hip-Hop’s most controversial albums, ever. The controversial nature of the album isn’t necessarily due to The Lost Children of Babylon’s (LCB) blatantly attempting to be controversial like say Eminem. Instead LCB would be controversial simply because they are Muslim and they speak their mind even if their opinion is counter to that which is popular. Even before the events of 9/11 there was much disapproval from both Muslims and intellectuals concerning U.S. intervention in the Middle East dating back to the end of WWII and continuing through the eighties and nineties with military intervention in Iraq and military funding of Osama Bin Laden. Before 2001 holding such views would simply get indifference from most people, after 2001 such views were seen as unpatriotic by most people. Even today, a majority of Americans remain too blinded by the hype guised as revenge and justice to give any issue involving Muslims and the Middle East a fair interpretation. Further adding to the controversy are people like John Walker Lindh, the infamous American Taliban member whose earlier internet activities on early rap message boards have gained some media attention and who honestly probably would be listening to LCB if they had existed during his youth.

Before getting into the thick and heavy political views that make up the core of this release, it is only fair LCB is evaluated on a purely technical level. In the tradition of the Wu-Tang Clan, LCB is a crew of emcees that is 9-deep. You read right, this Philly collective features 9 members, making it almost impossible to get a full feel for any individual member and identify the members with their names. I won’t front and say I can tell who is who, but even without knowing names I can say all nine emcees are as capable as any other rapper out. With nine members youâ€˜ll get different styles, all of which are equally energetic and passionate about what they talk about. The production on the album is potent as well with the music sounding very much like mid-nineties East Coast Hip-Hop. Some tracks feature eerie loops reminiscent of earlier Rza work while others sound like a mix of DJ Premier and the Wu-Tang abbot. Overall, I am feeling the crew as they can definitely rap and their production is on point as well.

Content-wise I definitely feel the crew on everything they say, not necessarily because I agree with them but because I believe in free speech and I enjoy seeing people genuinely speak their mind. Being an album almost entirely focused on 9/11 and the events afterwards the record is heavy on social and political commentary. Despite this common thread, LCB manages to mix things up. On tracks like “Warning: Boxcutterz on Airplanez” the crew has the balls to role-play as the 9/11 hijackers. “America’s Fallen Heroes” is a heartfelt tribute to the victims of 9/11. “Media” and “Propaganda” are searing criticisms of the American media system and the skewed view Americans have developed about the Muslim faith. On the general level I actually do share the same view that The Lost Children of Babylon possess regarding the situation after 9/11, treatment of Muslims by Americans, and war in Iraq. On a very specific level I can’t agree with the crew because their message gets muddled and distorted in delivery. On one hand the group condemns the war in Iraq and the witch hunt the government has started against “terrorists,” but it counters this condemnation of violence with its own call to arms and revolution. I understand their frustration, but I can not approve the idea that replacing violence with violence is the answer.

The group also repeatedly expresses their disapproval of the treatment of Muslims by Americans, once again I can sympathize (especially considering the recent idiotic outrage at the United Arab Emirates’, a U.S. ally, control of U.S. ports). But the group sends a contradictory message by at times implying that they sympathize with the 9/11 terrorists. To be clear, they absolutely condemn Osama Bin Laden and the extremist and distorted version of Islam he preaches and they do not approve of terrorism. Matter of fact, they only sympathize with any one on that side of the struggle to the extent they disapprove of the mess made by the U.S. which led to the opportunity for such groups to form. But while I understand their message, it is not very clear from their music without some deciphering, deciphering which the quick to judge American audience will probably not be willing to undertake.

If the limited online research I did to complete this review didn’t seal my fate, the writing and publishing of this review will surely get me on somebody’s watch list in this day in age. Even if an outright endorsement of LCB leads to a visit from my friendly neighborhood “peacekeepers,” I don’t hesitate in recommending “The 911 Report” to every hip-hop fan. Some of their views will definitely offend many, but there is substance and concrete facts that support their views. It may not be the popular opinion they present, but it is one that is valid and should be acknowledged. The fact that their exact view can be a little hard to decipher makes the album an intense listen at times and one that requires many listens to fully understand. Regardless, it is a journey and experience recommended to even the most “red-blooded” “American.” Simply put, “The 911 Report” is one of the most outspoken and brutally raw rap albums ever, given its subject matter that is nothing to laugh at.

With that said, we all know the inevitable fate of this project:

1. Those who either share the views of The Lost Children or who are open-minded enough to listen to what the other side has to say will appreciate both the technical and expressive quality of “The 911 Report.”
2. Some of those who share the views of LCB and take those views to the extreme will misinterpret the project and use it as an excuse to further propel their own ignorant hatred.
3. Most of America, rap fans alike, will either be too busy “creatively” shaking their asses or too close-minded to allow a different viewpoint to enter their mind.

Worst case scenario â€“ Tipper Gore gets her hands on a copy and this project gets the promotion it deserves.

The Lost Children of Babylon :: The 911 Report: The Ultimate Conspiracy
10Classic
Music10
Lyrics10