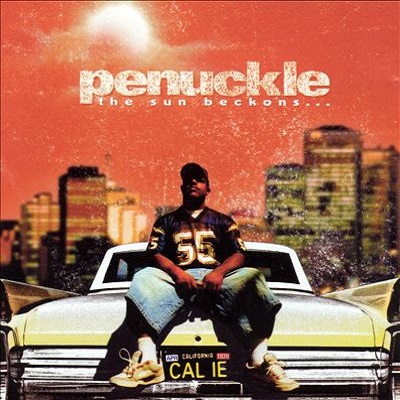 On the surface, our culture is devoid of originality. I’m not talking rap here (although don’t get me started), but American culture as a whole. Rap’s descent into themes of consumerism and sexism cannot be blamed entirely on the artists, because our media’s cultural prostitution is partly to blame for that as well. This is a time when original thought is like gold, and anyone who deviates even slightly from what is expected of them deserves a round of applause.

Penuckle is just the fellow I’m speaking of. His album “The Sun Beckons…” features him sitting in a football jersey on the trunk of his ride, with a baseball cap shadowing his eyes. Nothing too creative about that. His music doesn’t stand out too much either, at least initially. He provides miniature paragraphs accompanying the credits for each song, which is unusual, but mostly just a sign of a more personal connection to the music. What really strikes me about his commentaries on his own work, though, is that he considers himself an observer. He isn’t caught up in himself as much as he is in his environment, and his perspective of his world is very subtly unique.

“Welcome” does just that, introducing us to Penuckle over a generic production that allows him to shine:

“Feel the oxygen
We don’t need cars, we can walk again
This new world order shit kills a lot of men
Got crack cocaine on the block again
On the block again, young cats listen up
When you fall down, man, there’s nothing like getting up
So get up and get ghost
Put armor on your neck to protect from slit throats”

That “we” is the primary fundamental difference between Penuckle and other rappers. Sure, he has plenty of personal stories, but he is trying to accomplish something that is greater than just elevating himself.

Penuckle’s voice is instantly likeable, with an emotional but confident tone. His lyrics are not technically complex, but he makes up for this easily. “When Lucy Met Pearl and Broke Up With Tom” is a personal account of the story laid out in the song’s title. Penuckle maintains a cautious distance from the proceedings, but he is genuinely concerned with relating the tale. Sometimes, more clichÃ©d topics inspire him, such as on “Ghetto,” but in this case he presents it with more flair than is usually exhibited.

The musical selections are suspect, although the rare bold ventures find success, most notably with “Study Music.” Here, Penuckle himself crafts a smooth, reggae-soaked production complete with a faintly crooned hook. “Hot Life” is relentlessly breezy, and the subtle background music allows Penuckle to do the impressing. Many of the beats emulate this formula, though, with the admirable intent of allowing Penuckle an empty canvas. Unfortunately, Penuckle is not good enough to carry attention over shapeless and edgeless production. Very few rappers are. “Day Off,” aside from existing in a pleasant, sunny day that Penuckle describes, has a synth harmonizing with bells in a potentially great combination, but the hook is surprisingly irritating. A few other beats succeed, such as the aforementioned “Ghetto,” but I truly wonder whether it is due to the quality of their competition. Even “Parachutes,” which seems to be trying, is quickly revealed as a repetitive piano loop that only initially sounds remarkable because the melody is more defined.

Penuckle needs more crackling production to further his budding vocal intimacy and subject matter. He does not destroy mics, so the lack of interesting production is unavoidable and unforgivable. The music is hardly ever terrible, it just doesn’t bring anything to the table. Penuckle does all the work, so when he gets lazy it is obvious. I love his voice. It is the voice of a human being instead of a practiced recording artist, which immediately makes him more trustworthy. He also has plenty of things to say, and his presentation is more than adequate. He needs to find some new musical collaborators, though, or at least demand more ambitious tracks from the existing ones. When he does that, success will surely beckon.