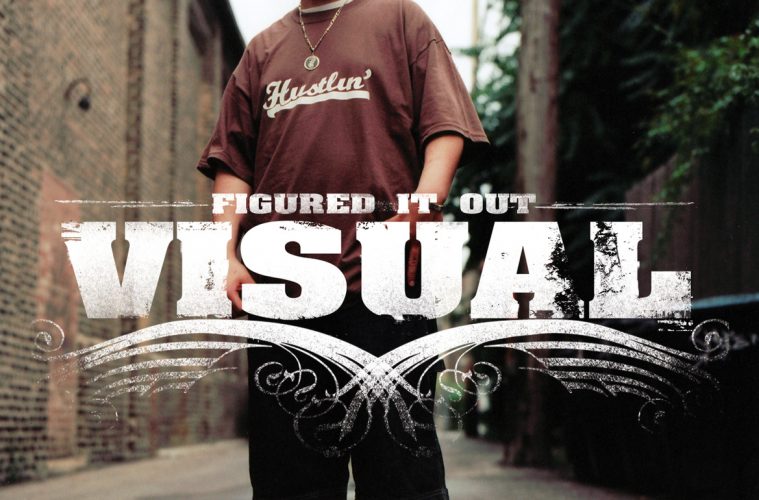 Visual :: Figured it Out

Visual (formerly NDVisual) hails from Chicago, home of a rising crop of underground stars that are making heads nationwide take notice. Copperpot, Diverse, Longshot, and even Lupe Fiasco are examples of Chi-town artists that are dropping singles and LP’s that are gaining underground interest, and I believe Visual would like to join those “buzzworthy” names.

What I gather from Visual is that he’s locally established. He’s a veteran (this is his third solo album), the CD packaging looks professional, and he’s down with JUICE and the Molemen. He’s got the right connections in his hometown, but does he have what it takes to make an impact elsewhere?

He might, but this isn’t the album that’s going to break his name. It’s a shame, because MC’s like Visual never get a fair shake. He’s a positive rapper; his message is generally that people should take more time to think about others and appreciate the place and people they came from. It’s a message that’s impossible to hate. His attitude is realistic and uplifting, not at all corny or preachy. His viewpoint is fair and balanced. He’s making hip-hop for the right reasons, and I commend him for that. I want Visual to keep making albums and I wish him success, but I can’t recommend purchasing this CD.

The beats, primarily handled by Infinite Beats and Big Deebo, are boring. They are sturdy, wooden things that never surprise the listener and occasionally hold back Visual’s flow. “Beautiful Woman” and “Blues from Chicago” are relative successes because of their well-chosen and effectively bolstered samples, but songs like “Ya Know” and “Relax” are embarrassments that simply don’t meet the standard Visual needs, I repeat, NEEDS to set for his material if he wants his star to rise.

There are far more of the latter than the former here, and after a while you start to expect the next beat to sound like the previous: simplistic and repetitive with only unimaginatively chosen synthetic sounds. If Visual needs to rely this heavily on Infinite Beats and Big Deebo, he should tell them to mix it up a little. Ploddingly simple beats in minor keys are not always deep or philosophical. Also, if you can’t buy (or download) a drum or instrument sound that has any character, get a sampler and learn to use it. I don’t doubt that these cats are trying to make backdrops that sound professional, but that’s to be expected. Visual is a serious and professional MC. He needs beatmakers that are striving to do more than just prove they aren’t amateurs.

Lyrically, Visual has something good going for him: he’s got a personality. He’s a real guy, a Latino guy, a Chicago guy, a guy who’s gone through trials and tribulations and come out with a good perspective. He is all person and no persona, which is a brave and intentional move. Check the title track:

“Roaches, rats, dudes poppin’ them gats
Fuck it, I killed the roaches and dodged the gats
Too strong for that, I couldn’t slow down
I saw the future, I got people to hold down
And now, it’s now
And I’m all in the crowd
I’m right there with the people
And they feeling so proud
To see me be me, stand up and be free
I can carry the weight so easily
I don’t give a fuck, and I figured it out
I got love in my heart, and I figured it out
Through all the ups and the downs, man I figured it out
What I am, what I’m not, yo I figured it out”

Lyrics that that are undeniably positive and responsible, and it’s great that he figured out who he is and how he’s supposed to live, but the overall effect is, sadly, ho-hum. The flow is able but nothing special, technically basic, and his tone of voice is clear and confident but not expressive enough to lend these words, earnest as they are, any real weight. They carry real gravitas for Visual and his close friends and family, but the majority of listeners will not care.

He fares better on the concept song “Dope: My Drug Story” where he cleverly narrates his initiation and involvement in hip-hop in such a way as to appear he’s talking about cocaine.

“Of course, like everybody, I just started out usin’
I saw my brother do it, so fuck it I got into it
And right then, every Tuesday was a new day
He put new product in our brain and made soufflÃ©
I was hooked, shit had me readin’ books
I needed more, and to get more, I did what it took”

Yes, the rap game/crack game comparison has been done to death, but usually by slangas-turned-rappers. Visual’s motivation for chronicling his association with and eventual distribution of “cocaine for your brain” seems to be to find a creative writing technique; it’s a chance, and it works.

He also sounds good rapping on “Blues from Chicago (Eye on Tomorrow)” as his connection with his hometown and the people in it comes through in spades. This song makes him an asset to his city, a concerned and involved citizen. Though rooted in local scenery and references, this is the type of song that, ironically, will make him matter outside the Windy City because it’s bereft of clichÃ© and reveals, in heartfelt specifics, where he’s coming from and who he is.

Out of place with the rest of the album, “Blessed” is the clear winner. On this cut, Visual trades verses with the one and only JUICE, world freestyle dominator. The beat, provided by Panik of the Molemen, stands in sharp contrast to the rest of the album. The beat is different from most of the others because it is evocative and interesting, and the two MC’s ride the breezy beat with ease. Though JUICE is clearly a cut above, Visual holds his own with him, a tough thing to do with one of the most intimidating rappers to ever live. Still, I couldn’t help but wince at the chorus as Visual seems to acknowledge that JUICE and Panik occupy an echelon above him:

The respect for his more accomplished colleagues is nice to see, but what Visual needs is a big shot of bravado, quick.

In the end, this album does nothing (save for “Blues from Chicago”) to further whatever underground renaissance is happening in Chicago. I’m sure that there’s excitement in the air down there and Visual wants to harness it, but he needs to try harder to deserve a spot in the underground elite.

For the type of MC that Visual wants to be (and one day might turn into), he needs to package his message in a whole lot more flash. I’d like to see more chances taken, a greater margin between the successes and failures. I take Visual far more seriously as a person than an artist, which is good for him but bad for this album.