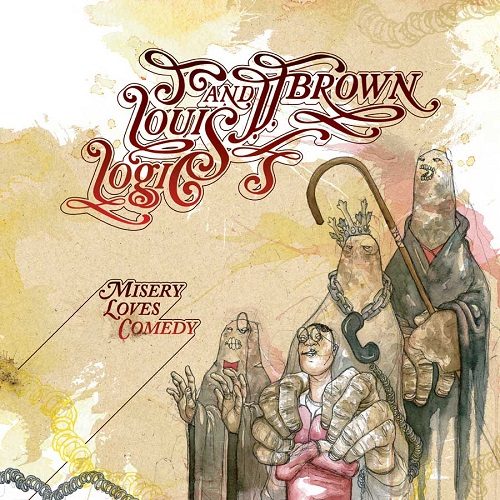 Louis Logic is quite the spectacle. He is part black, part Puerto Rican, was brought up by a white cop and an Italian woman, has a drinking problem, a crazy afro, and an even crazier MCing style. After his well-received debut album “Sin-A-Matic,” Lou got himself a deal with Fat Beats, and now he has stepped back into the arena, all cursing with a drunken swagger. Did he succeed in avoiding the pitfalls that accompany that dreaded second album after a successful first one?

Technically, this isn’t just Logic’s second album. Producer J.J.Brown, who has been working with Louis Logic right from the very start of both their careers, was responsible for most of the production on “Sin-A-Matic,” and because that one created such a buzz in the underground, the pair decided to make the next record with both names on the title credits. That’s quite the sentence, isn’t it?

On “Misery Loves Comedy,” Brown definitely has something going for him with his suave snares, and clever samples of the pitched voices of old soul legends. It makes his music sound lighthearted and well attuned to the mischievous mind state his compadre Louis Logic can be found in most of the time. That also means that this record doesn’t contain any certified bangers. The only track that deserved smacking the repeat button repeatedly was “Classy McNasty” with its subtle organ loop and funky bass line. Brown’s work can be judged best as a whole, and as a whole this album is a tasty snack in between meals.

As usual, the spotlight is mostly focused on the MC at the front of the stage, which in this case is drinking buddy Lou. He decided to put some more mature contemplations in his sophomore record “Misery Loves Comedy.” Besides giving the expected room to ‘comedy,’ he dedicates a lot of material to love, relationships and all the ‘misery’ they evoke. This part of the album – including “All Girls Cheat,” “A Perfect Circle” and the title track – sounds somewhat like an episode of The Oprah Winfrey Show, where Lou discusses the flaws past women in his life had:

“Well, it’s no wonder that sisters diss their brothers
We don’t want ladies, we’re just babies who miss their mothers
And piss our covers when we think our chick’s had others
You call yourself a grown man
but won’t stand and risk the justice
Get with the program, because chicks had lives
outside their own man, but girls can’t admit that, right?”

It’s not that there’s a dramatic fall in the quality of Logic’s rhymes, but there is a certain sharpness lacking in his words when he’s talking about the boy/girl drama. Misery loves comedy, but I love this guy’s comedy, not his misery. Luckily, there is also a lot of the former of the two to be found on this record. Lou’s qualities on the mic are unsurpassed when he flips the coin, and talks about his sexual endeavours with the ladies:

“Well, I’m different, miss
because I prefer to be honest
And I’m down to be friends
if we can work on some bondage
With her as a hostage
and the bird I’m packing
I give new meaning
to the word hijacking”

On the previously mentioned “Classy McNasty,” Lou drops even sharper rhymes when he heralds the successful cooperation between himself and J.J. Brown:

“Give me a chance, and a bigger advance
I’ll make an album so dope, that they ship it in bags
Lou’s mischievous rants are sort of like a hypnotist’s chants
putting school kids in a trance
Man, I got plans for the drought in chain stores
because nothing comes out that’s worth paying for
But my mouth creates clouds forecasting a brain storm
And these other rappers get rained on”

Louis Logic is still at his best when he’s being the entertaining motormouth people got acquainted with on “Sin-A-Matic.” If you can drop something like, “Or I can get you bent over a nice, elegant sofa, while I’m driving Dick home like the vice-president’s chauffeur,” it isn’t very likely you will be outclassed by other MC’s. Unfortunately, Logic’s more serious side is not nearly as interesting as his bragging and boasting. When he first appeared on the scene, people called him a wannabe Eminem. I hope to God that he doesn’t have to go the same way Slim Shady went. Sometimes, the fun stuff is to be preferred over content.