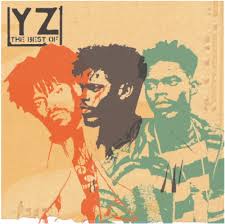 Trying to give this review the proper introduction it deserves was an abject failure. I’m admitting that right now. There’s a better chance I could have bent a steel girder by bashing my head into it repeatedly. I realize the odds of either happening are about 10,000,000 to one, but at least I could go outside and find a steel girder anywhere in Omaha – there’s always something under construction in this city. What I CAN’T find is any background information on YZ. That’s not to say that I don’t REMEMBER YZ. During the formative years when I was finishing high school and heading off to college, ever-expanding the depth and amount of hip-hop I could and would acquire, the song “(So Far) The Ghetto’s Been Good to Me” by YZ made a tremndous impression on me by sheer force of dopeness. I can still hear the beat echoing in my head and the catchy refrain of the chorus: “SO FAR! I’ve earned my respect in the streets/SO FAR! The ghetto’s been good to me.” Beyond that I couldn’t tell you shit – nobody on the world wide web has so much as ever devoted a page to the man, and even OHHLA only has two of his lyrics; neither of which are the song I remember. Even AllMusic turned up dry, only listing two albums YZ ever released and no biographical information at all. Wait a minute – only TWO albums? How is this shit even a “Best Of” when there’s only two discs in his whole career?

Before we get into that though let’s at least give YZ the respect he deserves and put some of this information out on the internet. It should be noted the one and only place any of this could be found was in the liner notes to this album. YZ’s real name is Anthony Hall. He hails from a crew that included B Fine, Pumice Sweet Love, DJ Jah-Z, G Rock, and perhaps one and ONLY one name anybody who remembers this era of rap besides me will recognize: Tony D. If that’s not ringing a bell, you’re forgiven, but he was the white and somewhat chunky New Jersey native Tony Depula who produced all those militaristic and strident Poor Righteous Teacher records. Yes Tony D was way funkier than Vanilla Ice, a fact he proved by releasing his own solo album with songs like “Check the Elevation” that too made an impression on me that’s stuck until the present day, but information about Mr. Depula is equally lackluster in a modern era that’s far too quickly disposed of rap’s past history. It should be noted that D’s other importance in this conversation is that he produced most of the songs found within “The Best of YZ” although that’s really not too hard to figure out. You see of the two albums Anthony Hall has credited to his moniker YZ, only one was released on Tuff City – 1990’s “Sons of the Father.” Apparently Tuff City either could not or would not license any material from his 1993 release “The Ghetto’s Been Good to Me” on Livin’ Large Records (who knows if they even exist any more) so as a result the majority of the material on this album is drawn FROM “Sons of the Father,” which Tony D produced. The credibility of the term “Best Of” has thus unfortunately been drawn even thinner than it already was, since if you’re lucky enough to have “Sons of the Father” in your collection you’ve almost got no reason to buy this record.

ALMOST. Despite what may be one of the most hilariously inappropriate uses of the term “Best Of” since the Fu-Schnickens, there’s certainly no joking about YZ. History may have forgotten Anthony Hall, but this album gives him one more chance to establish the stature he should have had all along. YZ as an MC is the best parts of Wise Intelligent and AZ. He’s got the unmistakably high-pitched vocal, a funky style of flow with just a hint of East coast, and even more than 15 years after the fact these beats are undeniably fat. “Crocodile Dundee” may fly over a lot of people’s heads with NOI references to Yakub (short version of the story – an evil geneticist who created the white race by breeding out all the strength, wisdom and intelligence of the black man, making whites a sub-human race) but whether you get it or not you can nod your head to the pounding bass and the melodic rhythm of YZ’s vocals. The same can be said of the swinging funk’n samples of “Back Again,” the slow heavy and righteous keys of “I’m Workin’,” the punchy “Get it Right” and straight up toe-tapping finger-snapping “Thinking of a Master Plan.” The samples are old school but as fresh as a new carton of Ben & Jerry’s straight out the freezer. There’s only a little bit of material not found on “Sons of the Father” but what is there is definitely worth your time, such as the metaphorical “When the Road Is Covered with Snow”:

“Woke up one mornin, it was kinda cold
In my room there was no room to consume the heat
Looked outside where the snow’s piled high
Covered the paths of the first man’s pride
But this won’t last cause the sun still exists
The road symbolizes the first man’s history
List achievements, far from sufferin
I will shine and stop the snow from smotherin
My pride, my blackness, my African culture
The snow gets thick, the road gets colder
The road gets harder but I hold strength of better days
The snow is here to stop me from gettin paid
But keep in mind I’m workin
The snow’s gettin paid and he’s steadily smirkin
As I smile cause I know somethin that he will never know
When the road is covered with snow”

Hailing to an era when many rappers were Afrocentric and a few were highly prejudiced against whites, one can still not deny YZ’s essential point being the same as that of Afrocentricity as a whole – an answer to African history and culture being excluded from a Eurocentric educational system, whether by oversight or intentional racism. It was a point of view that in part said there’s at least equal and perhaps greater educational value to the African history and culture to the European, that African history also shapes world history, and should be exposed and taught equally along with the rest. YZ comes from a time and era that many have forgotten and fewer have done anything to expose, but Tuff City deserves the credit for blowing the dust off “Sons of the Father” and repackaging it, although calling it “Sons of the Father: Remasteed With Bonus Tracks” would have been much more honest than calling it “Best Of.”