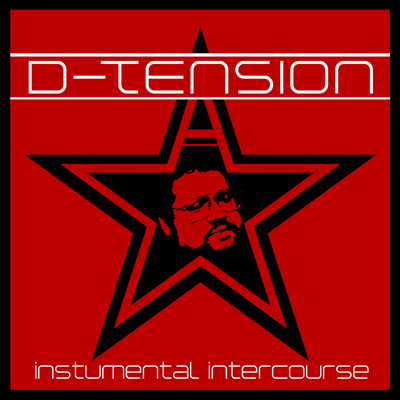 Producers are becoming more and more prominent these days. Before you might have known what DJ Premier looked like because of his Gangstarr photo shoots, but outside of a select few, most producers remained behind the scenes. Today you might know what the producer looks like and have little or no clue who exactly the supporting rappers are, as tends to be the case with Lil’ Jon. With fans being more receptive to the idea of the producer as an artist in his own right more labels are signing and promoting producers with the same fervor they do rappers. D-Tension’s “Instrumental Intercourse” looks to capitalize on the trend by delivering a full album of nothing but beats.

D-Tension’s style of production is mostly a laid back approach. “Robots” is an inappropriately named track as the smooth guitar notes and laid back beat don’t conjure up anything even remotely related to a robot or anything mechanical in nature. “Young + Restless” is more apt of a title as the track does show some tension between instruments as they play at different speeds and pitches. “Destruction of Man” flips what I believe is the Japanese National Anthem and which is probably more commonly known for its appearance in a Simpson’s episode where Lisa and Homer break into a museum to take a look at a mysterious Egyptian orb that turns out to be a music box. The sample is dope enough, though it sounds like D-Tension keeps his manipulation to a minimum. “Who’s That” features a flute and what could be a banjo or dulcimer. The beat’s best part is the bass line, which much like in the rest of D-Tension’s work, tends to play a very central role in the song.

“They Want Real” is close to the hardcore east coast banger one would expect from such a title as D-Tension mixes some strong piano hits with a guitar and other instruments. “Gotta Be Something” samples a cartoonish flute sample which plays with the bass line throughout the track. “In All Honesty” mixes parts east coast banger with D-Tension’s own take on southern synths with decent results. “Underground Railroad” also has a southern influence on the drums as the track has a bounce feel to it. “In Your Deck” is an unexceptional track. “The Gathering” sounds like it too is influenced by either Indian or Asian instruments and sounds like a happier more original version of “Destruction of Man.” “Gotta Be Something II” has a much more laid back feel to it than the first with almost an R&B twist on it. “What’s Your Priority” sounds eerily similar to other tracks on the album and by this point D-Tension’s style starts to wear a little thin. Thankfully the album closes out with the next track, “Who Lied” which too sounds influenced by the Far East.

D-Tension is a good producer but it’s probably not the best idea to keep releasing instrumental albums. Like most hip-hop producers, D-Tension’s beats are very repetitive. Therefore, after the first few bars you already have a good idea of what you’ll be hearing for the next 3-4 minutes. Unless you want background music that won’t distract you, D-Tension’s beats will probably drag on too long and not be varied enough to maintain your attention. For aspiring emcees looking for beats to rap over it might be a worthy purchase as D-Tension comes through with some quality music at times, but outside of that it would be best to wait for D-Tension to hook up with some emcees to add more life and variety to his tracks.