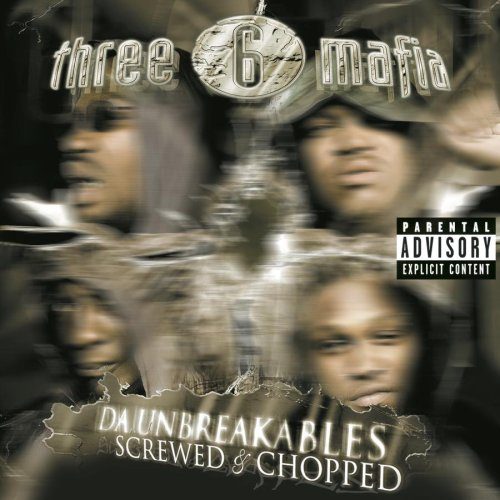 This album is in all likelihood several years old since I reviewed the original “Da Unbreakables” back in June of 2003. This didn’t seem like an entry for our Back to the Lab section though. Usually albums not reviewed within a year or so of their release qualify. Given a “Screwed and Chopped” album is a revision of an existing album though rather than a seperate release in it’s own right putting it with it’s kin seems to make more sense than filing it with 10 year-old LP’s.

Now let’s get down to the nitty gritty. First off I have to admit I’ve become a sucker for “Screwed and Chopped” albums. At this point if I walked in the record store and saw a CD labelled “Vanilla Ice’s Greatest Hits Screwed and Chopped” I would probably go “hmm” instead of being instantly disgusted. Doesn’t mean I’d buy it, but there are certainly a lot of “Screwed and Chopped” CD’s I didn’t need that I have picked up. They usually don’t offer extra songs the original version did – in fact because the tracks are slower and longer there are often several songs from the regular release that get cut. There are exceptions of course, and in some cases dropping a few weaker songs results in a vast improvement. The short story though is there’s nothing lyrically different from the previous “Da Unbreakables,” and that’s not exactly an album I was lyrically fond of anyway. Joke’s on me then for buying the Screw mix, because I’m making myself endure the same bad rhymes as before, now at greatly reduced speed.

There is an art to the Screw treatment though, and Michael ‘5000’ Watts represents SwishaHouse nicely with his update to their album. If just pulling the speed pot down was all there was to it, every single album made since time itself would have an alternate copy on store shelves. It takes precision to hit just the right speed to extend the bass beats smoothly though and keep them from reverberating into meaningless noise. On top of that you have to acknowledge the DJ’s timing in the mix, doubling up the right words for emphasis and effect, and adding scratches and cuts into the track to give it a totally fresh feeling. When Watts voice interrupts these songs to say “Michael Watts, SwishaHouse Remix” he’s not necessarily wrong – it’s not a remix with new beats or rhymes but it’s definitely a different and enjoyable new take on the original shit.

Now the bottom line is that the songs you would expect to come off better with a Screw treatment certainly do. “Ridin Spinners” featuring Lil’ Flip really lives up to the Three 6 Mafia’s imprint of “Hypnotize Minds,” because listening to the Michael Watts treatment is a mesmerizing experience with or without the lean. I can’t really explain why but the ignorant lyrics of “Fuck That Shit” sound better Screwed too. Other songs which benefit – the misogynist “Put Cha Dick in Her Mouth,” the weed anthem “Bin Laden” (with an appropriate reference to getting slowed off syrup) and the dancefloor call of “Shake Dat Jelly.” Overall though the difference between this and the first “Da Unbreakables” as compared to other albums that get the “Screwed and Chopped” treatment just doesn’t seem as dramatic. Partly that’s due to Three 6’s preference for slow and bang’n beats to begin with, and partly that’s due to the fact this update isn’t the best of Michael Watts work. It’s not that he did anything wrong per se but it has that “another day at the office” feel where he wasn’t on his A game – he just followed the formula and stuck to the script. The track order was changed and a few “interludes” between songs were added, but that’s about it. If you like Three 6 Mafia and/or enjoyed “Da Unbreakables” then it’s worth picking this version up, otherwise it shouldn’t be considered a must buy.