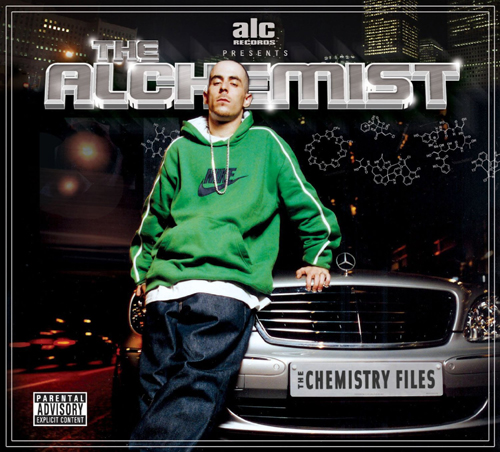 The Alchemist :: The Chemistry Files Vol. 1

Over the years The Alchemist has developed quite the reputation as a hip-hop producer extraordinaire. By now you’ve all read the story, but if not peep both part one and part two of this site’s exclusive interview with the man himself. For those who want to get up to speed on this review quickly who don’t know the man, he started off in a rap duo called The Whooliganz who were down with Cypress Hill, the group folded, and DJ Muggs took him under his wing. He developed his skills making beats and remixes for the Soul Assassins, then was elevated to a whole new “Platform” when Dilated Peoples blew up and Mobb Deep put him down for two tracks on “Murda Muzik.” His reputation has only continued to grow in the years since, and Alchemist has gone on to release compilations under his own name such as “1st Infantry” that are not only popular underground but have even gotten him a little bit of buzz in the mainstream.

Tragedy nearly cut his career shut in July of 2005, ironically at a point where he should have been enjoying his biggest success to date. Eminem had just chosen Alchemist to be his official DJ for the “Anger Management 3” tour, but on July 13th the tour bus he was on was flipped in an accident and in the aftermath Alchemist was left with broken ribs and a collapsed lung. The opening track of the new Alchemist album “The Chemistry Files, Vol. 1” has Eminem speaking on this subject live from the tour, which is both a way of addressing the fact that it happened and acknowledging the fact he has recovered since then and gotten back to business. In fact even though the normally reserved Alchemist usually uses his dope beats to give other artists the spotlight, he actually raps on a couple of tracks for this album including the opening song “Reppin’ ALC”:

“I don’t smoke piff I only smoke diesel and kush
I don’t hang around nice guys, only creeps and crooks
Look, it’s me, live in the flesh, so pump yo’ brakelights
And I’ma give you a second to get your face right
[…]
I used to take small sips, now I down fifths
Feelin like a pit boss how I count chips
I got a hefty stack, don’t try to test me Jack
I go to war no matter how much it’ll set me back
Beats is expensive and money is power
If you’re not one of ours you’ll just run with them cowards”

Gotta give Alchemist his due – even though I don’t remember any of the Whooliganz records from back in the day his performance as a lyricist here is just fine. It’s not some OH MY GOD HE’S THE NICEST MC ON THE MIC type shit, but he doesn’t embarass himself with the verbals either. His delivery is smooth, his vocal tone is not unpleasant, and it’s the kind of verbal braggadociousness you’d expect from someone who rolls with Evidence, Cypress Hill and Mobb Deep. Speaking of the latter it should be noted that some of the tracks found on “The Chemistry Files, Vol. 1” have already been released elsewhere such as Mobb Deep’s “The Infamous” from their “Blood Money” CD. Although that album itself was a dissapointment Alchemist’s track stood out from the pack, giving Havoc and Prodigy the gritty backdrop they needed to get raw while simultaneously paying homage to old school New York hip-hop with the samples. Let’s let MD’s own Prodigy explain:

“Just when you thought it was safe to come out
Infamous all in your face and your mouth
That’s right, niggaz best to stay up in the house
Whilst we gettin our money, for the two thou’
Nigga P back out in the street, so what now?
Strictly for the ghettos and hoods, in yo’ town
Probably got bundles of drugs, in yo’ town
Like crack, coke, or dope – remember me now?
Queensbridge muh’fucker we blow your house down
We the big bad wolves that eat your food clown”

Other songs that you will recognize from recently released albums include “Wet Wipes” by Cam’Ron, “G-Type” by The Product & Scarface, and Tony Yayo’s “Gunz is Razors” has been buzzing for a while now despite not having an official release before this disc. It’s not at all disappointing that Alchemist recycled all of these tracks since they’re type nice. What is dissapointing is that so many of these tracks are short freestyles between 1-2 minutes long, which by the time you subtract out the trademark “A-A-A-Al-Al-Al-Alchemist” repeats and “you better check your files” samples results in an even shorter amount of lyricism from the likes of B-Real and Obie Trice.

In fact for a producer with the reputation of Alchemist and a CD which is 18 tracks long by the outside cover, it’s shocking that you can listen to the whole thing from start to finish in well under an hour. This doesn’t really hold up compared to earlier Alchemist comps like “1st Infantry,” which not only featured more original songs but an overall higher quality of tracks on the whole. I have to be perfectly honest too – I could give a fuck less what somebody named Bobby Creekwater has to say, and hearing him come off like a bad cross between St. Louis and Atlanta doesn’t improve matters. It’s not that Alchemist didn’t try to cover himself by subtitling this album “Official ALC Mixtape” on the back flap, but that’s starting to become a weak excuse in general for not delivering a full album’s worth of material especially given that the record store still charges full price for it. There’s nothing BAD about “The Chemistry Files Vol. 1” per se, but it just doesn’t have that “must-own” feel that “1st Infantry.” I’m sure Alchemist has the bangers in the lab, he just needs to remember to share more of them with us next time.