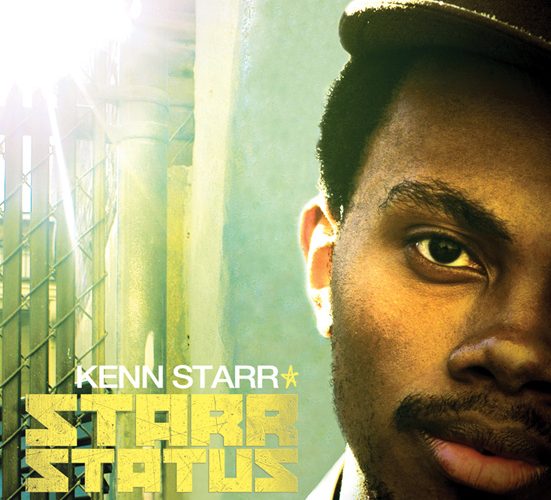 It pains me to write what I’m about to write. I’m gonna say some things I wish weren’t true, but if I didn’t say them, I’d be lying by omission, thereby violating the trust I’m trying to foster with the RapReviews audience. You trust me, right? You know I’d never do you dirty. So here goesâ€¦first the good, then the bad.

The first thing I noticed about “Starr Status” was the list of producers. Halftooth mainstay Oddisee produces six tracks, and if you don’t know, he makes consistently lush, fundamentally sound tracks. He makes beats that’ll make you want to buy a single to get the instrumental. People say he benefited from a brief tutelage under DJ Jazzy Jeff, but I don’t know about thatâ€¦all I know is that every time I see an Oddisee joint, I always listen to it. Also probably not ringing a lot of bells yet is up-and-comer Illmind, the track wrecker who caused serious damage on Boot Camp Clik’s “The Last Stand.” He’s capable of bringing all kinds of heat, from watery harp splashes to martial dirges, and logs two beats on “Starr Status.” M-Phazes and DJ Roddy Rod do their thing with no real missteps, but the producers that carry any real name-recognition here are Kev Brown (of “The Brown Album” fame) and Khrysis (Little Brother/Justus League affiliate). So, that’s the first of two good things about this album: the producers are all capable- some famous, some not- and there are no bootleg or straight up wack tracks here.

The second thing I noticed was that Kenn Starr (who I was not familiar with before) can rhyme well. Timbre-wise, he sounds a lot like his label-mate Wordsworth, and similar to the Lyricist Lounger, Kenn Starr raps with real intellect without bragging about his brain. Sure, most of the songs are predictably self-congratulatory, but he’s not an elitist per se. He rides beats well enough to try different cadences and rhyme schemes, and from a strictly sonic perspective presents a solid picture of how to rap in a clean, clipped monotone. Each song on “Starr Status” has some impressive moments, but some entire cuts (such as “U Will”) are dedicated to Starr’s jumping all over the beat with the singular intent of making the listener say, “Whoa, this dude is serious.” There are several times when that tactic works, as Starr is a clever dude with fairly nasty breath control. Also, it’s especially nice to see- alongside lots of “I’m dope and can’t be stopped” songs- Starr’s demonstrable willingness to dive right into adult emotions. “If,” the lead single exemplifies this other weapon of Starr’s, his readiness to emcee for the purpose of mature reflection. It is to his credit that on the aforementioned song he doesn’t sound a bit out of step alongside Asheru and Talib Kweli. Kenn’s lyrical strengths are the second good thing about “Starr Status.”

Now for the bad. Yes, the Oddisee beats are excellent. I’ll admit, the Illmind beats are good and the M-Phazes contributions are nothing to sniff at. Even though my expectations were not met by the Khrysis beat, it’s still a smooth vocal sample with enough grit to evoke feeling, a sort of 9th Wonder cast-off. Not bad, but something Little Brother would put on a mixtape and not an album. The biggest disappointments come from Kev Brown. I love Mr. Brown and his production vibe, but let’s be honest: Kev would never put these tracks on his own album. The snares sound cheesy as hell. He rhymes competently with Starr over the better of his two tracks (“Relentless”), but for Starr, Kev Brown needed to be the main hired gun- no mistakes allowed.

Another problem I have with this disc is the length. I know 17 tracks isn’t a lot these days, but that’s because these days are fucked up. Additionally, Kenn Starr is the kind of emcee that can’t edit himself so over-long choruses, reiterations of previous lines, making the same point over and over, and generally overstating any and all cases is the order of the day. Every song has clever bits, most clever enough to warrant a rewind, but Starr’s inability to see which lines are good and which are mediocre ruins whole songs. As a member of a crew, someone who to punch in and burn a hot 16, Kenn Starr would be much more effective. I don’t doubt his talent or his commitment to rhyming, but his intellect requires more focus and reflective revision in his writing if he’s to become more than just locally interesting. To be clear, he’s not coasting, but he needs to hold himself to a much higher standard if he wants to make good on his potential to be a clever, emotional, mature emcee with technical skills.

“Starr Status” is, to me, a frustrating listen because of what it could have been. I’ll say that Halftooth is right to include him into their fold, but he needs to own up to the responsibility of staying fresh in every one of his lines. You gotta play like it’s the big leagues even if it’s not. Still, “Starr Status” is worth listening to for more than a few good examples of what Halftooth Records is capable of doing.