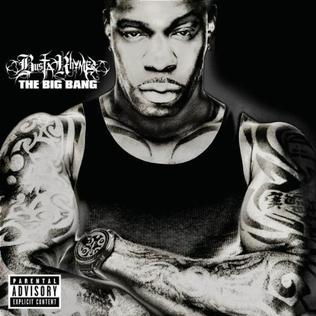 Nobody expected Busta Rhymes to go over four years without releasing an album, least of all his alter ego Trevor Smith. Or is it the other way around? Busta Rhymes has been so loud, colorful and outrageous for so long it’s hard to imagine he even has a name OTHER than Busta Rhymes – the name just fits him like a glove. His wacky wardrobe, his outrageous facial expressions, his scattershot rap flow and undeniably compelling ability to turn outrageous shit into hits make him the man who LITERALLY busts rhymes the fuck up. When Smith is not busy breaking words down into their organic compounds, you can find him playing bit parts on TV shows and in Hollywood motion pictures – which although well suited to his highly excitable personality has probably furthered the delay between his 2002 “It Ain’t Safe No More…” release and 2006’s “The Big Bang.” The oddest part is that he was clearly shopping for a new label after J Records, but ended up at AFTERMATH of all places. Not trying to knock on Dr. Dre or anything, but he doesn’t exactly have the most stellar track record for getting records from the rap legends who sign with him in stores. A completed King Tee album vanished, a Rakim album was never even finished, the list goes on and on. Unless your name is Eminem or 50 Cent, or you are signed to one of their two imprints, you don’t want the name Aftermath anyway where near your shit or there’s a good chance it won’t see daylight.

Somehow though “The Big Bang” made it all the way through the pipeline onto record stores shelves, and what’s even more surprising is that the opening track “Get You Some” has Q-Tip on the hook while Dr. Dre and Mark Batson drop beats incredibly like the heavy pianoes and snappy drums that WOULD normally be a 50 type beat. Busta gets all in this track though and even uses the album’s introductory song as a chance to take potshots at his former label as well as his detractors:

“A lot of niggaz shit sound dated
I’m like Shaq, franchise player just got traded
to the number one team in the league
See I ain’t on J Records, I’m on DRE Records, Aftermath BITCH!
You need to learn cause you ain’t knowin the half, BITCH!
And while I’m gone I’m puttin dough in the stash, BITCH!
So new and fresh I say it again
So what it do, don’t test see I’ma blaze to the end
I’m comin through, so confess you niggaz know who the kid”

Indeed we do, and if we didn’t the ubiquitous “Touch It” certainly would have made it abundantly clear. This single’s smash success and bazillion extended remixes may have actually forced Dre’s hand to put this album out:

“(Get low Bus!) Who be the King of the Sound? (Uh huh)
Busta Bus back to just put a lock on a town (Uh huh)
Lot of my bitches be comin from miles around
See they be cumin (Uh!) cause they know how the God get down (TURN IT UP!!)
NOW YOU KNOW WHO HOLDIN THE THRONE SO GIMME THE CROWN (Huh)
NIGGAZ SALUTIN AND TRYIN TO GIVE ME A POUND (Come on)
I DON’T REALLY FUCK WITH YOU NIGGAZ YOU NIGGAZ IS CLOWN
MAKIN THE BITCHES STRIP AND THROW THE SHIT ON THE GROUND
(Get low Bus!) Now that’s the way that it goes (Uh huh)
When we up in the spot the shit be flooded with hoes (Come on)
See we a make it hot, the chicks will come out their clothes
That’s when you get it (Huh) mami already know I suppose (TURN IT UP!!)”

Gotta give credit where it’s due – normally Swizz Beatz can try to make a track way too busy but on this joint he kept the beat minimalistic and let Busta’s personality shine through. The flow is positively bi-polar on this song – one second Busta is subdued and almost whispering (although his diction still remains crystal clear) and the next he’s shouting like he has to be heard over a roaring subway train. If anybody else tried to do this style in a rap song it would be an epic disaster, but Busta is such an outrageous character to begin with it fits him like a glove – and not in that O.J. Simpson way. The other tracks on “The Big Bang” are by and large a good fit too. Dr. Dre comes with a chunky track for Busta and Missy Elliott on “How We Do it Over Here” – to be honest I mistook it for a Timbaland beat at first given the guest and how the track periodically changes up melody. Sha Money XL’s “Been Through the Storm” is a subtle mixture of light pianoes and big reverberations of bass, which is entirely appropriate for unexpected guest star Stevie Wonder to croon over. What’s even more unexpected is Rick James being credited on the Green Lantern laced “In the Ghetto,” although it’s obvious from listening to the song it’s more meant to reflect how extensively he samples from “Ghetto Life.” James is not the only deceased soulful artist with a credit – the late J. Dilla did the beat for “You Can’t Hold the Torch” featuring Chauncey Black and Q-Tip.

Actually this brings up a good point – after waiting four years for Busta Rhymes to come back it’s not surprising so many artists want to work with him, but there seems to be at least one guest star on almost EVERY song. “Goldmine” features Raekwon. “I Love My Bitch” features Kelis and will.i.am. “Don’t Get Carried Away” features Nas and “They’re Out to Get Me” includes Mr. Porter. Only three tracks have no guest credit of any kind – Timbaland’s junglistic “Get Down,” the gravedigging Dr. Dre closer “Legend of the Fall Offs” and the aforementioned “Touch It,” although the irony there is that with so many remixes of that song Busta Rhymes became a cameo artist on his own song long before the album was even released. Speaking of pre-released tracks, “New York Shit” got leaked to XM Radio and the internet and it’s ALMOST a Busta solo if you discount the Swizz Beatz chorus.

A little odd for Swizz Beatz to be making a cameo on a beat he didn’t produce, but whatever fuck it the track is hella smooth. “The Big Bang” comes correct simply because Busta doesn’t commit any faux pass of epic proportions. Even though the album is crowded with a lot of guests, at least Busta and Dre had the decency to pick some that aren’t annoying assholes or up-and-coming nobodies trying to get a little shine off Busta Bust. In all honesty he also sounds more lyrically consistant and motivated than he has in some time, so the four year layoff may have been the best thing possible. I can’t say whether “The Big Bang” will live up to it’s name and explode all over the charts, but his loyal fanbase who have long awaited this disc should be pleased and there’s plenty of material to be found within for future crossover hits.