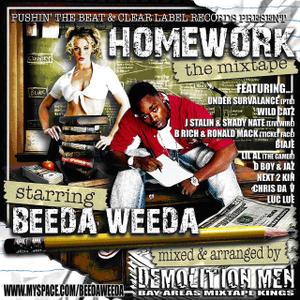 Beeda Weeda sounds like the name of the neighborhood crackhead. I had to say it, because as far as rap names this one is one of the worst I’ve heard. But just like the neighborhood crackhead can be full of surprises, so too does Beeda Weeda pull cards out his sleeve. A street rapper from Oakland whose style is more akin to what you’d find on NY mixtape freestyles probably doesn’t sound appealing at first, but then you find out the man is signed to Hiero. The same label that brought you Hieroglyphics and Del The Funky Homosapien has put enough faith in this youngster to sign him and publicize him heavily through a pre-album mixtape release. So there has to be something great about Beeda Weeda for such a revered underground label to make him their first “street” artist, right?

Despite Beeda Weeda’s surprising resume, he proves to be more flash than substance on “The Homework Mixtape.” Why Hiero put so much faith in him I’m not sure, it’s probably just pressure to hop on the bandwagon which is the Bay area movement. Now Beeda Weeda isn’t a hyphy rapper, but he is among the group of Bay area rappers who have kept the traditional Bay area sound as far as music goes but have adopted a more lyrical/battle rap approach to their lyrics. The best example of such a rapper is Balance, whose debut album just dropped about a month ago. While Balance has the advantage of saying he was one of the first, if not the first to adopt this new Bay style, he also backs up his status with pretty dope songs. Beeda Weeda on the other hand can’t claim to even be original and he’s not very good either.

“Homework” is an exercise in repetition and unoriginality. Beeda Weeda is a thug, Beeda Weeda is a thug, and seriously, Beeda Weeda is a thug. If Beeda Weeda had more to offer in the rap department then his constant street boasts would be easier forgiven, but with lines like “flip like pancakes” it’s hard to give the guy much credit. The highlight of the mixtape comes with track 2 (No tracklisting was provided) where Beeda Weeda pays homage to Too $hort by remaking a song from his “Life is â€¦ Too $hort” album. Beeda Weeda doesn’t really do anything impressive with the track, it just reminded me I hadn’t heard that Short Dog album in a minute. To Beeda’s credit, it is a difficult task to be original when you’re talking about the same things everyone else has been talking about for the last few years. But unless you really need another song about how great it is when the girls make their elbows touch their knees, Beeda Weeda won’t provide much substance. The press kit also claims Beeda Weeda is a producer extraordinaire, but “Homework” only showcases beats that are ok but don’t bring anything fresh to the table. You get tracks that sound like imitations of The Clipse’s “Grindin'” along with other tracks that sound like imitations of every other Hyphy track out (How many songs can have “Go Dumb” in the hook before someone thinks of something new?).

With Stones Throw signing Roc C and the Bay area’s more gangsta elements getting all the shine lately, you can’t blame Hiero for trying to get in on the action. The problem is that they decided to sign one of the less talented and less original rappers from the Bay. Guys like Messy Marv and Guce drop much better gangsta music than Beeda Weeda, while Balance has got the lyrical side of things on lock. Stone’s Throw’s Roc C isn’t a personal favorite, but he at least has the benefit of being able to tap into the talented pool of producers signed by Peanut Butter Wolf. Maybe with better beats and more focus Beeda Weeda could put together a few decent songs, but even then I don’t see him making the type of impact the guys at Hiero had hoped for.