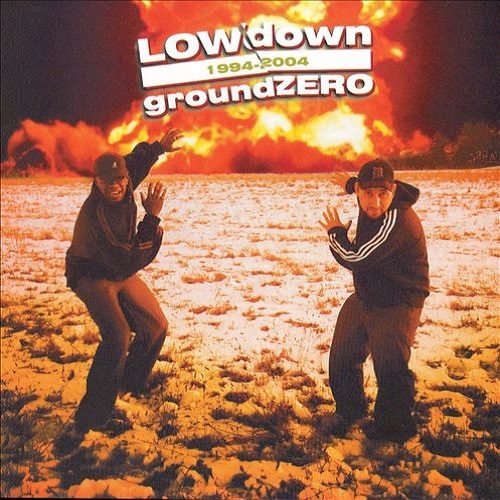 To keep their hungry fan base happy, most hip-hop artists nowadays try to put out an album or at least one mixtape a year. Some succeed in that effort easily, and flood the market with an iron consistency that resembles a General Motors assembly line, both in uniformity and originality. Others try to stay true to their art, and put out the fruit of their thoughts only when it’s done, dammit! If you follow this train of thought, the Ohio-based group LOWdown have crafted an absolute masterpiece. It took them an entire decade to put together ten tracks, and now their official debut “groundZERO” is available in stores.

After the obstinate rap group The Coup had finished mixing their latest album “Party Music” in the summer of 2001, they wanted to craft a cover that would get the diggers’ attention in the local record store. Raymond “Boots” Riley and DJ Pam the Funkstress, both Marxists by conviction, posed with a big smile in the foreground while above their heads a huge detonation ripped apart the World Trade Center. One of the group members held out a bass guitar tuner as a detonator to show the crowd that their attack on capitalism was of a musical kind. Their timing was probably one of the worst in musical history, because two months later the shit hit the fan with a big bang. In the aftermath of September 11th the album with this cover never reached stores, and was eventually replaced with a less controversial front cover.

With full knowledge of the attack, and with no political agenda whatsoever, C-Doc ‘The Warhammer’ and Tirade of LOWdown thought it would be wise to include the aftermath of 9/11 in their own cover art. The inside of the jewel case booklet shows an aerial photograph of the obliterated remains of New York city’s most famous landmark. LOWdown decided to take it one step beyond The Coup, as they pose on the front cover shielding themselves from an atomic bomb ravaging the surrounding area. With a population that almost lynched country group The Dixie Chicks for criticizing their own government, this probably isn’t one of the smartest moves imaginable.

It wouldn’t be fair at all to judge these two MC’s by their rather tasteless choice of cover design. As soon as you start to listen to “groundZERO” it becomes obvious that LOWdown has no other intention other than proving to the world that their debut will have the same impact on the world as an atomic bomb. But before I started listening to this, they pointed out to me in accompanying writing that “If you were to take two classic hip-hop albums, namely The Low End Theory by A Tribe Called Quest and The Beatnuts’ self-titled debut, put them together, and make a group out of them, the result might be LOWdown’s ten year opus groundZERO.”

Maybe Atlas put more weight on his shoulders by carrying around the entire globe, but I don’t think the difference is that big. On “Ten Years Coming” LOWdown start off their ‘opus’ with the following words:

“I get into your head like a CAT scan
Yo, this shit is getting heavy like Jake and the Fatman
You try to blow me up, but you didn’t factor
I got all the angles figured like a protractor
So why are you staring like you’re double daring me?
You know I reign on you with verbal dexterity”

Quite nice, but not very memorable. C-Doc ‘The Warhammer,’ short and Caucasian, and Tirade, tall and Afro-American, have a style of music making that feels as old school as the albums they refer to, but putting themselves on the same level as those groundbreaking classics is a little bit too much too ask. The Warhammer, who handled a fair share of rhyming and is also in charge of production, crafted a sound that is a blast to the past for any old school hip-hop head out there. Most tracks contain every single element that made a rap song from the beginning of the nineties successful. A little bit of boom to the bap, some lively scratching, and a couple of legendary samples to top it off. After careful listening, the horn section from The 45 King’s “The 900 Number” can be discerned on “Ten Years Coming.”

The problem is – these are not the nineties anymore. George Bush Sr. is not President anymore, his son is. This is not the first Gulf War, but the second one. Madonna isn’t doing her first comeback; she’s doing it for the fourth time in a way too tight gymnast’s outfit. All right, some things never change, but LOWdown’s musical growth did not evolve the way it should have. The rhyme schemes, rhythm patterns and tag-team wordplay of the twosome sound hopelessly outdated. Even when you compare them to their idols, big acts from the nineties, the talent of the MC’s who hooked up in their high school years doesn’t stand a chance.

Tirade is obviously the better MC of the two. What bugs me most about his style is his shakey way of filling up bars. When he comes short, he doesn’t mind stretching up some syllables to reach home plate without getting his pants dirty. C-Doc is not a very noteworthy MC, but he has some qualities on the board that he should have pursued on the entire album. The last track, called “Haupchuchindopiyam (Parts I-IV), contains some instrumental elements that sound very promising. The song, which lasts for an agonizing forty minutes, alternates jazzy beats with some nice freestyles, but also contains some beeps and bleeps that would make El-P cover his ears in agony.

Instead of perfecting their craft on the mic, LOWdown put quite some effort in the visual part of their career. Packed with “groundZERO” comes a DVD disc that is filled up to the brim with music videos, a documentary, and even a short movie that involves kung fu fights and bad hairdo’s. It’s sad to say, but the duo’s comical talents surpass their talents as musicians, because their crazy gimmicks, costumes and story boards for their videos made me laugh more than a couple of times. If you interview your own label executive (who happens to be Chuck D) wearing a shirt saying: “Stop Plate Tectonics” you must have SOME sense of humor.

Ten years is a long time coming for any musician, but I am sad to say that the period between 1994 and 2004 was not well-spent for these two MC’s from Ohio. LOWdown sounds like a relic, and I doubt there will be much people who will appreciate their old school cheerfulness. I admire their positive attitude, and I hope they realize that if they want to stay in this industry, a decade is just too damn long to finsh their next album.