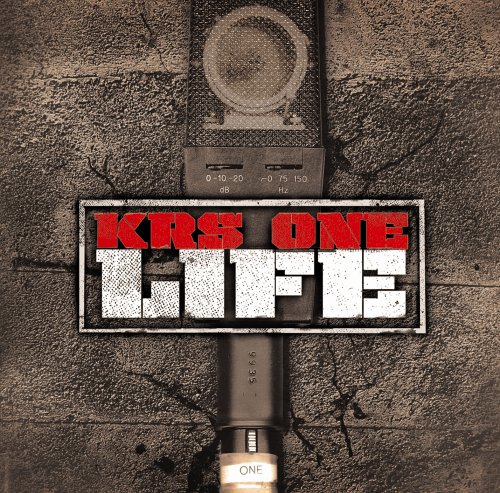 I’ve never been a big fan of KRS-One though I definitely respect his approach on the mic. I have nothing against the man’s finely tuned and precise flow or his dedication to the youth and passion for uplifting messages. Put simply, KRS-One is just too preachy for me. I enjoyed “Step Into A World” almost ten years ago and no one can deny the classic status of most of the B.D.P. material, but as KRS has aged his material has become more and more like a Sunday sermon. So while I’ve avoided the man for a long time, I’ve missed enough church during the last year to probably need a good long sermon. Thankfully, while KRS-One does drop the knowledge throughout on “Life,” he keeps things interesting and varied.

“Bling Blung” starts things off and KRS schools cats to both sides of having money, highlighting the consequences and potential risks of flossing too much. “The Way We Live” is a semi-critical Hip-Hop anthem and isn’t the best track as KRS is at his worst complaining about the culture. The rhymes and beat aren’t bad, but the message doesn’t move me. “Woke Up” is an interesting track as KRS details different revelations he has had about music and life. “Mr. Percy” is another social track about the ongoing problems and concerns that come with barely making a living and trying to make ends meet. “Fucked Up” is probably the album’s best track as KRS effectively conveys the consequences of living the street life. Instead of taking the usual route and trying to make himself seem hard or his hood seem tough, KRS spits about the reality of life but doesn’t exalt the ignorance that can come with such warped respect systems:

The rest of the album follows the same pattern, you get a series of socially conscious tracks and in between them you’ll find one or two songs about hip-hop or emceeing. Most of the songs are very solid, with tracks like “Gimme The Gun” revealing a new side of KRS-One with him sporting a rapid fire flow over a hard-rock/techno like beat.

As always, KRS-One always has his overbearing moments where he gets too heavy and his random fake Jamaican accent gets annoying at times (Am I the only one that finds it a bit stereotypical to whip out the Buju Banton impression on socially conscious tracks?). But low points aside, most of the track’s on “Life” are relevant and head-nodding. The production, handled by The Resistance, fits KRS’ style of rap perfectly and still manages to bring something new to the table. Most of the tracks follow the old-school approach, looping a dope sample with a boom-bap beat but the production crew does throw some curves. “Gimme The Gun” and “I Ain’t Leavin”” are innovative when it comes to rap beats as the mesh different styles effectively. The only real questionable moment comes with “I Am There” where the production duo uses the same sample used on Big Pun’s “Whatcha Gon’ Do.” Not only was the sample flipped perfectly the first time around, but hearing KRS spit over the beat only brings up comparisons between him and Pun and frankly KRS-One can’t hold a candle to Pun’s skills.

“Life” is the best solo album I’ve heard from KRS-One but I have not peeped most of his solo work. Despite the quality of the material on “Life,” KRS-One still lies on the brink of losing touch with most rap fans since his lyrics tend to be too serious most of the time. I believe the world needs positive role models just as much as the next man, but I also realize that people don’t like to be reminded of their problems all of the time. Maybe KRS-One has become jaded by the rap game and his previous crossover attempts, but as good as most of the material on “Life” is it won’t get heard by anyone but those who already agree with KRS’ views, which is a shame considering the quality of the music and message.