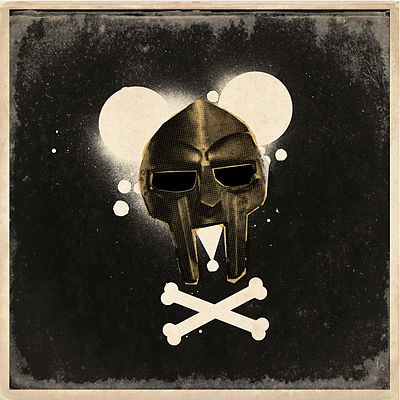 So good you don’t even have to pay for it. Say what now? That’s right. Thanks to the generosity of Danger Mouse, MF Doom and [adult swim] you can download the new Danger Doom EP for free. It’s hard to think of anything better than “cheap as free” now is it? They even tell you to pass the word along to “your freeloading friends” and encourage them to download the songs too. The question is are they good enough that you’d want to?

The album opens with an amusing instrumental skit by “The DJ Grand Imperial Master Shake,” who offers his services to the ladies and proclaims how glad he is “because Meatwaaaaaaaaad’s not here.” In fact he says Meatwad is a downer “like if you were having sex and your mom walked in.” Afterwards Doom comes in for an “El Chupa Nibre Remix,” but honestly it’s not a remix at all because both the lyrics and the beat are entirely new and only contain a few tie-ins to the original version:

“What happened? He coulda went platinum
Then he discovered the secret plan they had to gat him
… It wasn’t hard to find the file to pull
They had they differences, all irreconcilable
And that’s a pile of bull – they’re bad
That’s why they don’t tell no tales, don’t wear plaid
His upper lip and dome stayed stiff
I made him try to riff over a homemade gift
A statue with overfoam chrome sprayed Kif
With a handwritten signature from dude who played Biff
The Simpsons, but “Back to the Future Part II”
And leave it up to you, to choose who
When he cruise through, he know how you foolsies do
Get him catch him dreamin and you creep him like a Suzie Q”

This is followed up by the short but sweet “Perfect Hair II,” which like the first installment is inspired entirely by the non-sensical anime style cartoon “Perfect Hair Forever” in which MF Doom provides the voice of a talking giraffe. The beats on both of these tracks are not overwhelmingly dope, but again it’s hard to complain when they don’t cost anything. At least Doom comes correct with the verbals:

“The forest is very misty
And help to provide for the switching sides of Terry or Twisty
Or, Model Robot, who got more grease
Sherman stinks so put some hot sauce on your niece
(or what?) Or Nephew, I hope he got a 12 for his sake
Made a wrong term into a hole, hell of a mistake
Animals in the car had made a piss lake
Must of interferred with the wiring on the disc brakes
(Yeah) It makes for good bar time rec talk
Shoulda used the hamburger necklace from off his neck stalk”

The best track on the entire “Occult Hymn EP” is the very first one that [adult swim] gave away for free, “Korn Dogs.” Somewhere along the way they decided it needed to be ebonicized a little more and changed the spelling from the original to “Korn Dogz” with a Z, but rest assured if you ended up with both titles on your iPod you only need to keep one because it’s the exact same song.

“A seemingly modest fellow
With a DJ’s ear and graffiti artist’s elbow
Nose of a Mouse and the brain of two weasels
Discovered a name and new strain of the measles
He say you accidentally caught it
In sole circles and dots to those who could afford it
Once you squeezed his face through the gate
and got stuck, too much fake soy-based cheese product
Did a scheme and was in it for the Aspercreme
Slashed your team, let’s see who can make Casper scream
Down to the last marine
See him as your cable man, sizin up your plasma screen
Instead of doin the jux with pistols
Or workin in the back, cookin sacks of crystals
Or runnin on logs out in deep water kickin
Corn dogs for the pickin”

The rest of the album is largely filler. First is another skit, this one based on the White Shadow of Minoriteam fame trying to recruit Danger Doom as a supervillain for his crime syndicate. This is followed by a “Remix” in the truest sense of the word for the song “Sofa King,” an entirely new beat with exactly the same lyrics. The track’s kinda fresh though so I can dig it. The same can be said for Madlib’s remix of “Space Ho’s” – largely the same lyrics although the intro and the beat are completely fresh as is the new track. Overall I’m not sure if this short 7 track EP with only three original new tracks, two skits and two remixes would be worth paying money for unless you were/are a die-hard fan of either MF Doom or Danger Mouse, but as a free EP for [adult swim] fans it works well. Since you don’t have to pay for it go ahead and tell your freeloading friends.