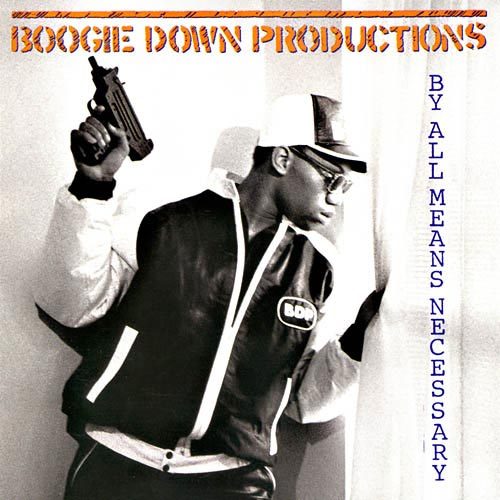 By All Means Necessary

In about four seconds, a writer will begin to write. I grew up as an only child for most of my life but when I was around 12 or so, my older brother moved in for a short while. He had an interesting assortment of things in his room. There were a few Betamax tapes, a few magazines (one of them ended up being confiscated by my junior high school principal) and a lot of records and cassettes. There was an unlabeled Maxell tape that was black and gold, the label was peeling off on one side. I went ahead and popped it into my tape deck to listen. From what I remember, it was an old mix and the side was nearing its end. There was a bit of Audio Two and then some Eric B. & Rakim, then the tape stopped. I flipped the tape over, hit play and the first thing I hear is “So, you’re a philosopher?” followed by “Yes,” a bit of scratching and “I think very deeply.” At that moment, I was hooked and just had to keep listening. Of course, the song that I’m talking about is “My Philosophy” and the album is Boogie Down Productions’ sophomore release, “By All Means Necessary.” For those unaware of the BDP saga around this time, the Cliff Notes version goes like this: Scott La Rock and KRS-One came together as an unlikely duo when Scott was working at one of the shelters where KRS was living. They released “Criminal Minded” in 1987, which went on to achieve critical acclaim. In the summer of that year, Scott was killed after trying to diffuse a situation involving D-Nice. KRS would soldier on, continuing to shout out Scott on many songs, but there was a shift from violent to more socially conscious music. The first effort was “By All Means Necessary,” which draws influence from Malcolm X for both its title and memorable album cover.

It has been nearly twenty-five years to the date since the album was released, does the album still hold up? Things open with the aforementioned Stanley Turrentine-sampling “My Philosophy,” which still ranks high in many critics’ lists of best hip-hop songs ever. KRS gives you his views on the importance of originality, the pomp and circumstance that comes with being in the industry and the refusal to compromise by commercializing his lyrical content, as he raps:

“This is lecture number two, “My Philosophy”
Number one, was “Poetry” you know it’s me
This is my philosophy, many artists got to learn
I’m not flammable, I don’t burn
So please stop burnin, and learn to earn respect
‘Cause that’s just what KR collects
See, what do you expect when you rhyme like a soft punk
You walk down the street and get jumped
You got to have style, and learn to be original
And everybody’s gonna wanna diss you
Like me, we stood up for the South Bronx
And every sucka mc had a response
[…]
Rap is like a set-up, a lot of games
A lot of suckas with colorful names
I’m so-and-so, I’m this, I’m that
Huh, but they all just wick-wick-wack
I’m not white or red or black
I’m brown.. from the Boogie Down
Productions, of course our music be thumpin’
Others say they’re bad, but they’re buggin
Let me tell you somethin’ now about hip hop
About D-Nice, Melodie, and Scott La Rock
I’ll get a pen, a pencil, a marker
Mainly what I write is for the average New Yorker
Some mc’s be talkin’ and talkin’
Tryin’ to show how black people are walkin
But I don’t walk this way to portray
Or reinforce stereotypes of today
Like all my brothas eat chicken and watermelon
Talk broken english and drug sellin’
See I’m tellin, and teaching real facts
The way some act in rap is kind of wack
And it lacks creativity and intelligence
But they don’t care cause the company is sellin’ it
It’s my philosophy, on the industry
Don’t bother dissin me, or even wish that we’d
Soften, dilute, or commercialize all our lyrics
Cause it’s about time one of y’all hear it”

Just in case you thought KRS was going soft, the “Smoke On The Water” riff-borrowing “Ya Slippin'” nips that shit in the bud. In retrospect, perhaps Nelly should’ve listened to that track a few more times before he decided to make ill remarks towards The Teacha. “Stop The Violence” begins as a diatribe against political crooks and discusses how anything that goes against the agenda of the government will eventually be readjusted to present only what they want to be seen, encompassing all forms of media. It concludes with a call to end all of the violence in rap as KRS makes the point of only wanting to come to the club to chill out and not to watch someone’s blood spill out. Valid point. KRS doesn’t refute the fact that America is a great place to live but he also doesn’t have a problem with pointing out the double standards in place on “Illegal Business,” boldly claiming that the country is actually controlled by the illegal drug trade. My brother’s tape did not have “Nervous,” the shoutout track that gives props to the entire BDP posse and others in the industry. I guess my brother was trying to save some space or something. Instead, my tape cuts to the first track from the B-side of the album “I’m Still #1.” Redman would later remake the song, shouting out his Def Squad crew and others. UGK also recorded their own version of the song on their 2007 “Underground Kingz” album. KRS goes into Teacha mode on “Part Time Suckers,” kicking the style that he calls Vocabulary, as he raps:

“And in a hurry, just in the nick of time
Cause I do four things: rhyme, produce, teach, and bring to you new styles
Well here’s the first style, right out the pile
It’s called vocabulary. Difficult, isn’t it?
At least is looks that way when you witness it
Kill (kill?) meaning to deprive of life
Fiancee: future wife
Poet (poet): a person who writes poems
Wandering, meaning to roam
Everyone sees me when I walk into the public
Even the suckers, I just love it
When they get disgusted every time I prove
(Boogie Down Pro…) Boogie Down Productions will move
Meaning to motivate, lest rhyme straight
Hate is a very very big mistake
It rhymes with frustrate and aggravate
Let me just demonstrate why I won’t abbreviate
Television, a view of scenes transmitted
Every single second you get it
Pepsi (what?) the choice of a new generation
Fired from work: termination
Quality: something special about an object or person
Can you rock a party without rehearsing?
I can, anytime, on the spot rhyme
Many recording artists can’t do it, but I’m
More than just a recording artist kicking dust (who?)
I’m a sandstorm, taking human form”

In 1988, AIDS awareness was just beginning to take root. The purpose of “Jimmy” was to stress that HIV and AIDS are certainly real and using condoms would greatly decrease the chances of contracting HIV. The famous line “you can’t trust a big butt and a smile” is derived from this song. DJ Red Alert’s adlibs keep the song from being too preachy and overbearing. The album comes to a close with the hard-hitting “T’Cha-T’Cha” and the spoken outro, “Necessary.” The latter is KRS-One’s view on the acceptance and promotion of violence and the hypocrisy of it all when applied to various situations like rap music, popular movies or even buying a kid a toy gun for Christmas. It’s an interesting juxtaposition to say the least. The end game is peace. Whether it’s peace by war or piece by piece, the reality of peace is scary. We must get there, by ALL means necessary.

My brother’s tape also didn’t have the closing “Necessary” but I would hear it years later. Instead, he opted to put selected parts of “Criminal Minded” at the end, which resulted in me not knowing some of the words for a long time. The production here had all the makings of a Jeep-ready banger. It was something that could really push your Kenwood speakers to the max, you know? Boogie Down Productions would release three more studio albums and one live album before KRS-One started recording under his own name. To answer the question I posed earlier, yes the album still holds its own twenty-five years later and it will hold up for twenty five more. It’s necessary.