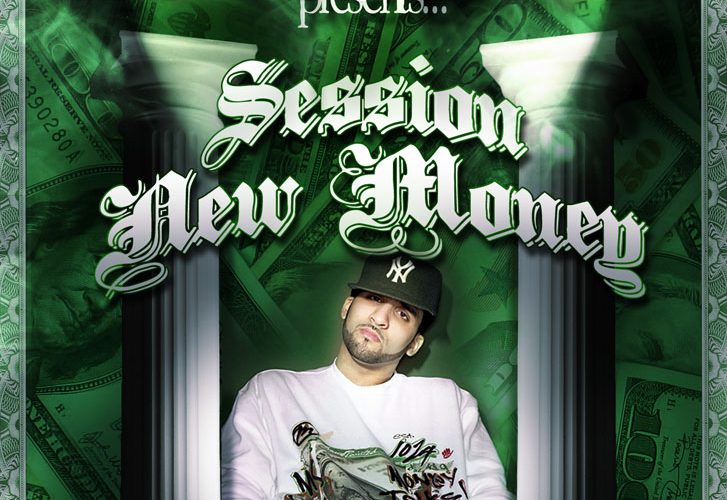 Call me nostalgic (or delusional), but I’m still waiting for a new savior to resurrect New York back to its rightful place as the center of this Hip Hop thing. I just never got over my first loves, those mid-90s warriors of the second renaissance, coming from Queens and Shaolin, the Bronx and Brooklyn. I guess that’s why, despite almost endless false gods and self-proclaimed prophets, I sat down to Session’s “New Money Mixtape” with not a small amount of excitement. Could Session, who’s definitely hungry and definitely NYC (Bronx by way of Hartford, CT), be the next Rakim or Nas? At least the next Kool G? Sadly, I got to say no. What I’m seeking is a return to the ’88 mind state, one that emphasizes not only talent (which, by the way, Session shows he has in spades), but charisma, style and above all, ORIGINALITY. What I got was another mixtape showcasing the nihilistic slick talk of guns, hoes, weed and flows, ultimately leaving me feeling vaguely empty. I guess this stuff sells, but without anything to distinguish it creatively or musically it’s hard to tell Session apart from all the other 50-cent biters currently flooding the mixtape circuit.

The proceedings on “New Money” are handled by DJ Envy and DJ KG, and thankfully they keep the always obtrusive DJ shoutouts to a minimum. This is definitely Session’s show, ostensibly designed to showcase his broad range of flows and lure major label offers. Beat wise, “New Money” displays a solid but unadventurous mix of familiar club bangers and NY’s signature ominous string-loops, with only a handful of tracks hitting hard enough to rise above the uniformity. Session spits with almost non-stop boasts and the kind of remorseless criminology that has come to be standard fare since Raekwon and Jay-Z flipped the script in the mid-90s. Which was surprisingly entertaining, at least for a few tracks. Despite the unoriginal subject matter and philosophy, Session frequently manages to be both menacing and funny, almost convincing me his bluster was a realistic depiction of his ability to alternately beat you in a battle, beat you physically, or get your money and girl; his skill lies not in subject matter, then, but in his ability to construct a verse with real momentum combined with an infectiously hungry swagger.

The first four tracks (after a standard mixtape intro) display the kind of ornery fire that we’ve come to expect from any eMCee seeking mo’ money and respect. “The MC” opens with an operatic beat and some straight up battle rhymes and mostly clever punch lines (sample lyric: “and ya tape sucks/ turn that trash shit off/ tryna pass it off/ you a fake fuck like jackin’ off”). Like I said, this basic subject matter is found throughout the mixtape, and frankly gets old before a dozen songs are through. By “Whup â€˜Em” (the 5th joint), his humor is largely absent, and what we’re left with is tiresome gangsta tirades. It’s frustrating that many of the verses seem nearly dope but not quite. Maybe it’s because Session’s voice lacks the gravity that his content and beats demand, or maybe it’s due to the complete lack of originality, but I just can’t vibe with this stuff for more than a few joints.

Breaking the monotony of tone briefly is “Route of Evil,” a commendable but uninspired social commentary about, yep, the green stuff and its potential for harm. By vaguely following the physical path of a dollar as it passes between criminals, junkies and the poor (a technique done much better on I Self Divine’s “Getcha Money On”), the song lacks any real insight to justify its weak narrative structure. After “Route of Evil,” more braggadocio follows. Although there are a few true bangers on the second half (peep “Get Out of My Way” for its horror-core organ loop and gleeful misogyny), the tape largely ends where it started, with Session still hungry but me still largely numbed from the homogeny. The few guest artists from Session’s Pharcity crew showcased on four of the last six tracks display the same flaws he does, and with less presence and charisma than the star of the show, they are largely forgettable.

As a mixtape, I wanted to judge this release fairly by de-emphasizing the importance I usually place on solid song structures and concepts. Ironically, the songs here are surprisingly strong, which is almost more disappointing for me. I would rather have heard a raw but promising mixtape from Session than something that sounds like a half-assed full-length. At the same time, because of the frequently-standard beats, vocal tone and subject matter, the songs tend to bleed together with nothing much to distinguish one from any other. I really did want to believe in Session, but I can’t help remaining skeptical of his ability to put together a tight and persuasive LP. In the end, his output here only reinforces the sad state NYC Hip Hop is threatening to wallow in: there are a thousand eMCees out there with talent and drive for days, but only a handful with something new to say. Jeru, hold ya head.