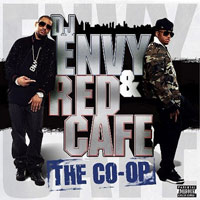 Wikipedia defines a co-op (short for cooperative) as an ‘autonomous association of persons united voluntarily to meet their common economic, social, and cultural needs and aspirations through a jointly-owned and democratically-controlled enterprise.’ I’ve mostly seen the model applied to health food stores and housing. Now DJ Envy and Red Café have applied it to hip hop.

Or not. Other than the fact that this album is a cooperative effort between DJ Envy and Red Café, there isn’t anything here that has anything in common with whole foods or shared housing. Still, as a duo, Envy and Red work together nicely. Envy supplies a steady supply of glossy, New York beats for Red to work with. Standout tracks include the bumping synths of “What It Be Like,” the 80s bounce of “What It Do,” featuring a verse by Remy Martin, the reggae of “Ghetto Children,” and the Neptunes-lite of “Dolla Bill.” He also misfires a few times, like with the melodramatic synths on “Move Like A G” and the uber-cheesy “Shakedown 4 Life.”

While Envy sets up some nice shots, Red Café doesn’t always get it in the basket. He is of the Lil Wayne school of hip hop, i.e. rappers who rap about the same old gangsta bullshit with enough originality and wit to make it sound good. Unfortunately, Red Café isn’t quite as original or witty as Weezy. Listening to him rhyme, I could understand both why he has made such a splash on the mixtape scene , and why he has been shuffled around between three or four record labels. He’s got skills, but he’s not always, shall we say, maximizing his full potential. He’s pulling punches, rapping about the same tired shit when he should be taking it to another level. Take “Invincible,” which has a ridiculous chorus:

“Shakedown invincible
Never let a nigga get the best of you
Always keep a chopper next to you
You know, .38 Spesh-u-al
Let it go like (Pow Pow Pow)
Let it go like (Blau Blau Blau)”

Red Café also frequently indulges in that dubious but popular rhyming style where you just repeat a word or phrase as a rhyme:

“Ocean 11 motion, loking toting Mac 11
Poke him both him and his unborn son
Arm and Hammer man
Oakland 211
Shoot first when I bang I’m the last to run
Matter fact, can’t remember when last I run
When last I ran
I rather blam
My hood more like Afghanistan
Goddamn it man”

The major problem with this album can be summed up by the skits, which chronicle the life and death of MC Death Murder Homicide, a rapper who comes off tough on his records but is in fact a total dork who loves Justin Timberlake. The first skit is funny, and I was thinking, ‘OK, Red Café is commenting about how wack gangsta rappers are, and how lame it is to rap about violence.’ However, the Death Murder Homicide trilogy ends with the MC being killed by Red Café for lightly dissing him. I realized that what Red Café was REALLY trying to say with the skit is that phony MySpace gangsta rappers are wack, because they don’t really come from the streets like he does. I’s an unconvincing argument, and makes for some unconvincing rhymes.

“The Co-Op” has some good beats and some decent rhymes, but I think that Red Café can do better than this. I respect that he comes from the streets and wants to use that in his lyrics, but he needs to find a more original and creative way to leverage being shot and being in prison. As it stands, on “The Co-Op” he just sounds like a million other rappers doing the same thing, backed by beats that are good, but not good enough to truly stand out.