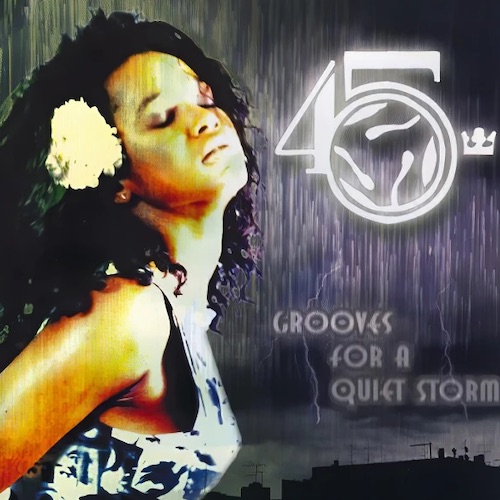 Grooves For a Quiet Storm

The 45 King :: Grooves for a Quiet Storm

Okay, so here’s what I came up with before starting up the good old internet search engine:

Sometimes I wonder if a veteran producer like The 45 King listens to the more leftfield contributions contemporary beatsmiths make to hip-hop music. People like Madlib, Edan, DJ Shadow, RJD2, Prefuse 73, J-Zone, Blockhead, DangerMouse, The Molemen, Ant, Oh No, Copperpot. Or what he thinks of the most sought-after producers of the day. These are general questions that could apply to basically any artist that has seen a great number of peers come and go, but if I needed a particular reason to ask, it would be “Grooves for a Quiet Storm.” The King’s latest release on Tuff City, his label of choice for damn near 20 years, isn’t dramatically different from many of his other projects. Because if it was dramatically different, one might be able to make interesting connections to musicians our readership might actually be more familiar with, rather than to wonder whether his majesty ever even heard of them.

The first thing that came to my mind when I beheld the title of this CD were some of Rakim’s classic “I Ain’t No Joke” lines:

“I’m just a addict addicted to music
Maybe it’s a habit, I gotta use it
even if it’s jazz or the quiet storm
I hook a beat up, convert it in a hip-hop form”

That’s the spirit, and that spirit has led DJ Mark to pioneer many a sample use and established him as one of the most productive producers in all of hip-hop. Instrumental albums are part of the King’s trade since the late ’80s, with releases from “45 Kingdom” to the “Straight out da Crate” and “Lost Breakbeats” series to “Break Beats for Dummies.” The man’s a sampling maniac. Therefore it is quite a revelation to come to realize that the 50 minutes of “Grooves for a Quiet Storm” often may take the traditional approach of pairing a drumbeat and a bassline with assorted melodic supplies, but that none of it sounds sample-based. Especially the sounds of the piano/keyboard variety are interwoven as if they were played purposely for the respective beat. I may be totally wrong in this assertion. If I’m not, I can only speculate as to the reason why DJ Mark decided to refrain from sampling on this project. Did he run run out of sources to sample? Hardly. Does he see a challenge in crafting completely original beats? Possible.

Now here’s my assessment after a proper investigation put an end to the wild speculation:

Research reveals that parts of this CD have already appeared on the 1996 vinyl EP of the same name. It’s quite feasible that not just the 8 tracks from that EP but also the rest of this here CD was crafted around the same time, meaning approximately ten years ago. So basically all that talk about Madlib et al. is a moot point. Unless you want to contrast the conservative approach of “Grooves for a Quiet Storm” to the cutting edge producers from a decade ago. (Why can’t I seem to remember any of them?)

Anyway, I’m kind of at a loss for words at this point. Which isn’t really that exceptional given this is an instrumental album. Which, for the sake of completeness, consits of 20 all-instrumental tracks, all of them vibing on a comparatively mellow wavelength, none of them being frustratingly short, some even clocking in around the 3-minute mark. Audio archeologists are invited to guess whether Mark samples, interpolates, or originates. (There’s no denying that he recycles, as he used the bassline from “Bachelor Party” for MC Lyte’s “Big Bad Sister.”) Production neophytes and 9th Wonder are invited to take a lesson in what bass and drums actually mean to hip-hop. 45 fans are invited to learn that not every track delivers what its title promises (“Funky Piano,” “Dope Sound”), the reviewer is invited to see the progressiveness in “Bluez Melodic” and the notoriously lazily crediting and editing Tuff City label is condemned to take the full blame for the confusion.