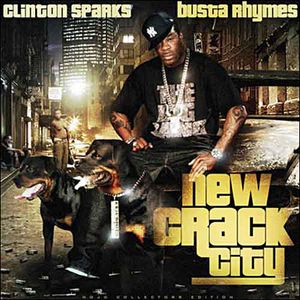 As a little kid, I used to be a huge fan of WWF pro wrestling. The outrageous alter egos, the violent behavior inside the ring and especially the great freestyle threats towards the opponent right before the show had an enormous appeal to a little kid with a mischievous streak. To my pleasant surprise I got to watch one of these threats while reviewing an album that came out just last month. On Clinton Sparks’ website, madman-with-no-afro-no-more Busta Rhymes, promotes their joint effort “New Crack City” by doing a video threat rant that would scare the (very tight) pants off Hulk Hogan any day of the damn week!

It is great to see that veteran Busta Rhymes hasn’t lost the wild temperament and hunger he displayed on the ATCQ song “Scenario” at the beginning of his impressive career. After an interval of four years Bus-A-Bus just dropped his new album “The Big Bang” on Aftermath Records, and “New Crack City” is a nice snack on the side for the well-received sixth album of this old but not yet weary lion.

Busta Rhymes is not the only artist on this street album that sounds like a family dog left in the woods on a leash without food. Rising star DJ and producer Clinton Sparks has been creating quite the buzz for himself with his collaboration with the self-proclaimed God of hip-hop Kanye West, and has been flooding the market with mixtapes from his own label Mixunit.com. In an interview with AllHipHop.com Sparks exclaims: “I just created a new card game for casinos that is being patented right now. We have the websites, where people can buy all of the latest mixtapes. Iâ€™m going to be a DJ for Shady Radio, which Eminem is launching on satellite radio. I have a group called XL coming out, too.”

Clinton seems to be just about everywhere. But does he have enough time to provide Busta Rhymes with a steady collection of beats to rhyme over? The answer is a whole-hearted yes. Sparks has come up with an amazing amount of original songs that immediately sets “New Crack City” apart from the avalanche of mixtapes being released all over the world. Virtually no skits, some definite bangers, and almost no garbage is an achievement these days. The nice thing about Sparks is that he isn’t shy of experimenting a little bit. Sampling Phil Collins on a hip-hop track (“Survival”) made me laugh out loud, and the Soul II Soul rhythm section might have been hit material back in the days (“However You Want It”), but on a 2006 street mixtape it sounds out of place.

The only thing that is not exciting about this tape is MC Labba. Not only does he feature on a handful tracks together with the main star, but he also gets the opportunity to do five songs of his own. His lazy tone of voice and sloppy delivery are both unimpressive and quite boring, so it would have been a better idea to take this man out of the equation when Busta and Clinton came up with this album.

Apart from these mishaps, Sparks does a more than decent job with his energetic and grinding style of producing. His best achievement is making Busta Rhymes and especially his Flipmode affiliate Rah Digga sound as energetic as a couple of eager rookies on open mic night. Although some fans will be very displeased with Busta Rhymes’s more aggressive style of rhyming, it looks like this new step in his carreer gave him an incredible energy boost. His labelmates Rah Digga, Papoose and even Busta Batman’s Robin Spliff Star sound invigorated as well.

Even when Busta Rhymes appears on the front cover of “New Crack City” with two huge Rottweilers that are obviously added later with some Photoshop magic, and a crack junkie in the background that looks like the fatter version of Kanye West, it doesn’t make me less excited about the new road the Flipmode chief has taken. This album is nothing more than a finger exercise, but the all round quality of the beats and the infectious Flipmode energy give me much hope for the future. And if the rap thing doesn’t work out after all on the shady Aftermath, Busta Rhymes can be my favourite wrestler every day of the week.