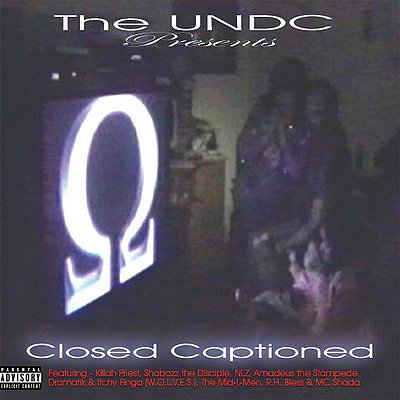 Sometimes guest spots can do a lot to get an up and coming group noticed. In this case not only does the UNDC boast an appearance from Killah Priest on their debut album, but according to their press kit they were even featured on the official Wu website as a hot up and coming group. Of course, long-time Wu-Tang fans know that the clan has had plenty of problems producing quality works from Wu-affiliates so an endorsement from the Wu isn’t as impressive as it should be. With The UNDC, it is clear why people affiliated with Wu would be quick to endorse the group as the political nature of the group mixed with hardcore beats is a formula used by plenty of the extended Wu-family. It doesn’t hurt that the group is based in New Hampshire, the nation’s whitest state, because it is particularly exciting to see such a product coming out of a state like that.

The crew lives up to the hype in a way. The entire album maintains a dark and political nature and does have a gritty, underground vibe. Despite keeping in tune with the spirit of the Wu, the crew just isn’t all that great. A lot of the group’s shortcomings can be blamed on the production as it tends to be too simple and not refined. The fact that the production lacks polish gives the album its gritty feel, but in today’s game, that vibe can be achieved through other means. “Camelot” features an entirely too simple synthesizer loop and sporadic bass hit. It’s the kind of production you might have expected 10 years ago and even so the melody is a little too happy given the group’s message. “Hells of the Hood” gets a bit better, but the melody still sounds a bit too upbeat given the dark feel of the song. The rest of the album suffers mostly the same fate as the beats are consistently weak. The main reason is that it seems the producers tried to avoid sampling at all costs. The effort is a commendable one, but despite a trend towards composition in the rap game, there is only a few gifted producers who could rely only on their composition skills and still come through with dope music. DJ Dax and Epic Visions are not in that elite class of producers. They come up with half-decent loops now and then but they stop there. Instead of adding more instruments or layering, they find one 4-8 note loop and just drop it on top of a drum beat. On the Killah Priest assisted “Constant Dreams” it sounds like they use a sample, but even with a decent sample the track is lackluster since it has almost no variety in the beat or sample loop.

Lyrically, the crew has a lot of potential and come through with dope lyrics and song concepts. They still have some work to do as they stumble over their lines when they try to flow too fast and words run into each other at times, but most of the problems could probably be fixed with better recording equipment. The worst offender is Dax as his high-pitched voice doesn’t translate well and is further hindered by his frantic pace which makes him difficult to decipher most of the time. As was said before, the crew focuses on dark and political themes and it works well for them. On “Brotherhood” the darkness is exhibited well:

“Without question, the blood on my pen
Force my soul to repent and think it over again
Please forgive me father, it’s like I’m drowning in sin
The thoughts pass through my head and I can’t even defend
I’m at odds with the demons that I invite on a nightly basis
I got the heart of giant but I can hardly face this
Person that I’m see up in the mirror
Daily fucking with my head, making me hysterical
I get the feeling that I can’t hold on, look into my eyes
My girl can read it, like it’s written on my head, I despise
All those that betray me, when I betray myself
I wanna bury my face into a bottle, my health
It’s like I became a walking contradiction
The friction of spittin up bud, or ripping for love
Became a victim to drugs, it’s like I’m slippin from dug
And falling out of the sky, now take us out of here Wize”

It’s by no means the dopest set of lyrics out there, but could definitely find a lot of fans among underground fans of groups like Jedi Mind Tricks. With more refinement, The UNDC could definitely develop a strong following among those who seek out the dark and political.

The UNDC definitely could be a force in the underground rap scene. They sport a set of ambitious emcees and already have a foot in the door. With appearances by Killah Priest and Shabazz the Disciple on their debut, they at least have more industry support than most groups have their first time around. But despite the support and effort, the group still needs to step up a lot. The production is completely unacceptable, even for an underground album. The emcees needs to work on their flows and possibly on the quality of their recordings in order to come across much clearer. With improvements in both those fields the crew can go places. As it stands, “Closed Captioned” is too unrefined to be recommended.