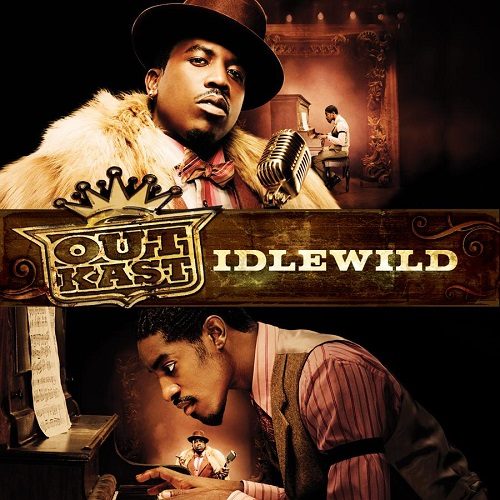 Whether you were a fan of “Speakerboxxx” or “The Love Below” one thing was clear back in 2003 – OutKast were a group in name only. The release was two seperate albums packaged and sold together, and the difference between them couldn’t have been any more night and day. Antwan ‘Big Boi’ Patton’s “Speakerboxxx” was much closer in spirit to a traditional OutKast album thanks to his hard raps and hard beats, while Andre ‘3000’ Benjamin’s “The Love Below” was all of the worst parts of Andre’s experimental nature. With very few exceptions there is a reason rappers are rappers and singers are singers and the two are ill-advised to crossover into each other’s field. Would you buy an album of Guru or Ice Cube crooning soulful ballads? Do you really want to hear Al Green or Babyface spitting some gangsta shit? Andre 3000 gave up a perfectly credible rap career to become a totally mediocre singer, and to add insult to injury the quality of his writing went down to boot. When the list of best written OutKast lyrics is compiled you won’t find lines like “roses really smell like POO POO POO” or “shake it like a Polaroid picture” among them.

But for the love of all holy, what the hell do I know? This ridiculously schizophrenic double album went 11 times platinum, which actually means it’s one of the few rap releases in history to achieve “diamond” status of over 10 million copies sold. Not only does that easily make it their best selling album of all time (the second closest “Stankonia” only sold four mill’) it puts them in the kind of turf occupied by the Backstreet Boys, Madonna and Aerosmith. It is and will continue to be that Andre 3000 and Big Boi, arguably one of the greatest rap duos of the last 25 years, achieved their greatest success on the least unified and harmonious album in their entire catalogue. Perhaps that’s the reason rumors of OutKast’s demise continue to swirl around even three years later. People let going gold or platinum go to their heads all the time in this business – what kind of effect can selling over ten million records have? Andre must think he’s the greatest singer who ever lived, and even the seemingly well-grounded Big Boi may suddenly think he’s the shit and doesn’t need anybody else to be a hit. The truth is these two were always better together than seperately – Andre gave Big Boi a little of his colorful flamboyant steelo while Big Boi’s streetwise rap helped keep Andre grounded. Going their seperate ways permanently might be a success on the charts but to their long-time fans it would be a failure as artists.

The question then is simple – after selling that many records with such a schizophrenic split double album, do they still care about the people who’ve been down with them since “Southernplayalisticadillacmuzik” or do they just not give a fuck any more? There are no easy answers to be found on “Idlewild.” On the plus side this album/movie soundtrack feels more like an OutKast album simply because it’s not two seperate discs packaged and sold together. On the minus side there still seems to be two seperate albums within “Idlewild,” a Big Boi album and an Andre 3000 album. The tear which formed in 2003 does not seem to have been sewn closed in any way and despite outward appearances may have actually gotten wider. Take the two lead singles as an example, starting with “Morris Brown.” This swinging marching band song features Big Boi with no sign of Andre anywhere:

Even here Big Boi can’t avoid being asked about their status, as he has to lyrically answer the question of whether he’s still cool with Andre (which tellingly he actually doesn’t) and whether or not OutKast is still a group (which he claims is true). If you ignore these distractions it’s a fun song complete with guest appearances by Scar and Sleepy Brown. It’s hard not to notice that the other single “Idlewild Blue” is the opposite – it’s all Andre 3000 doing his Prince singing shtick with no sign of Big Boi whatsoever:

The unofficial single “Mighty O” might be one of the few cases where the two really seem to be working together. Andre 3000 does do some crooning for the hook “Mighty-ighty-ighty-I, Ottie-ottie-ottie-O” but he’s spitting an altogether rare rap for him these days:

“You ain’t a hater, cain’t tell
Either wish me well, go to hell or go to Yale
Study human behavior so that you know who the hell
you dealin with ain’t nutty but the study gon’ unveil
my relative in jail (ha) stay engaged
To whatever make money now he married to that cage
Divorce is not an option and pre-nuptial is void
Eat up whatever rapper but I’m tangled in my cord”

Big Boi comes in batting second and knocks it out of the park for the team:

“An estimate is needed for your underestimation
I’m firin on the spot go back and check yo’ calculations
Like a sniper in the bushes with that rifle I’ve been patiently waitin
Now that’s a virtue – cause pussy nigga I’ll hurt you
Like the President’s approval rating by serving yo’ ass with words fool
Slam yo’ back to the curve bruh, like sanitation worker
Cause ya trash, I’m takin out the trash and all trash get mashed
and compacted because it’s no longer valid
Go head recyle repackage then put it back in my cabinet
Boy that’s germs, I’m fresh up out the store e’ry time
That nigga that B-I-G, go hard e’ry rhyme”

It is indeed a mighty mighty song, but only because it’s a rare glimpse into an OutKast seldom seen on this CD. Far more typical are songs which split the group into two seperate individuals. “Peaches” is just Big Boi and his guests, while “Chronomentrophobia” is Andre trying some George Clinton type shit and tacking a rap on the end of it. I’m even less interested in the out and out singin’ 3000’s bringin’ on “Life is Like a Musical” (like hell it is) but at least I can get into Big Boi performing WITH singer Janelle Monae on the jazz musical styled “Call the Law.” Big Boi holds it down on his own for “Buggface” but Andre holds down nothing on the aptly titled “Makes No Sense at All” by speeding up his voice and singing math like “four and four makes eight” before admitting “who the hell needs lyrics anyway?” Sometimes the songs which seem the most like the old beloved OutKast feature other people from the Dungeon Family stepping into Andre’s shoes and playing Big Boi’s lyrical partner in crime, such as Killer Mike taking his place on “In Your Dreams”:

“Keep lookin at me with a gangsta grill
And I’ma give yo’ ass a gangsta spill
That’s a lil’ piece of led, taken to the head
That nigga ain’t live, that nigga there dead
Takin dirt naps, sleepin with the fishes
Done like dishes, it’s a wrap like Christmas
Big Boi you say the word I’ll make these niggaz dreams a nightmare
I will bust they motherfuckin head!”

There are still a few other occasions where you can find both working together on a song instead of together seperately, such as “Hollywood Divorce” featuring Lil Wayne and Snoop Dogg. Other times even when they’re on the same song they seem to be in two completely different worlds, with Andre 3000 doing a song-and-dance routine for “PJ & Rooster” while Big Boi drops a few bars here and there seemingly for the fuck of it – 3000’s over-the-top crooning totally dominates this self-produced track which you’ve heard in all the commercials for the “Idlewild” movie. I’d be lying if I said I hated this album, or even if I minded Andre’s singing as much as I used to, but the more I hear OutKast the less OutKast I hear in them and “Idlewild” seems to prove they’re two seperate artists even more than the last double album did.