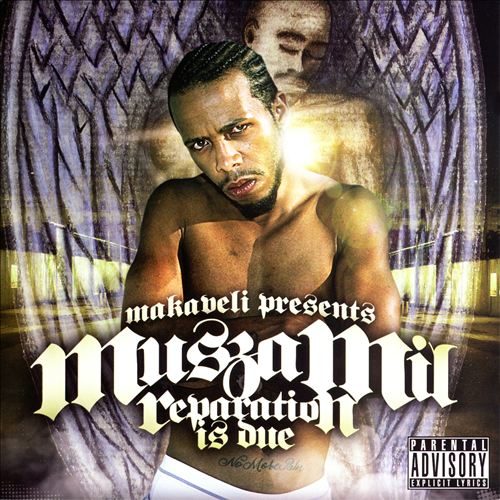 No artist in history has surrounded himself with such inferior talent as Tupac Shakur. It seems like most of hip-hop’s legends have all at one time sported their own gang of sub-par rappers; from Nas’ QB’s Finest to Biggie’s Junior Mafia; but no one star has shined the brightest next to his cronies than Tupac and his Outlawz. One would have imagined that their place in the rap game would have faded along with ‘Pac himself; it would not have been so surprising if their loyalty inspired them to do so intentionally. But in 2006 the Outlawz remain ever-present, a blip on the hip-hop radar, fluctuating with each posthumous release and tribute album.

Still repping “thug life” ten years since Shakur’s passing, MuszaMil hits us with “Reparation Is Due.” Let’s get a few things straight about homeboy before we go crazy. Firstly, he ain’t even one of the said Outlawz. This is Napoleon’s brother, releasing what is essentially an Outlawz release on the strength of Afeni Shakur’s approval. And there he stands on the cover, enclosed in a halo of light, the Don Killuminati’s silhouette eclipsing his own in the background. If MuszaMil isn’t intentionally presenting himself to be the glorious figure he comes across as, he’s kidding himself; he’s in the foreground of an angel for cryin’ out loud. He ain’t from the west side, nor does he call Baltimore, Shakur’s original stomping grounds, home. At the end of the day, he’s from Jersey, and he damn sure loves Tupac.

Curiously enough, and in hilarious accord with an all-too recent Chapelle sketch, the album is indeed “presented” by Makaveli, or so it proudly declares on the ethereal cover. Tupac’s epic pimping continues to show no boundaries, ranging from old record labels to old friends, but sure enough, the shallow marketing ploys only begin with him. Among the guests listed are the likes of Malcolm X, Stevie Wonder and Teddy Pendergrass. Here I am, expecting rappers of like monikers, or perhaps guest spots from the LIVING artists in question, but being duped by mere samples. If it were in hip-hop etiquette to namedrop sampled artists, all Madlib track listings would be in the form of a running encyclopedia.

In the end, none of that shit matters, but in relation to a goddam thing going on in our beautiful world TODAY, neither do MuszaMil’s raps. He’s still mourning Tupac, still embracing “thug life,” still repping the Outlawz, and breathing whatever life he can into a prehistoric Bad Boy beef. It’s old news, front to back, and he hardly makes up for the album’s lack of relevance with his flow, which is a slightly less animated form of an already decrepit Napoleon. If he isn’t reminiscing to when “All Eyez On Me” was the hottest album in the country, he’s speed-filling the LP with interchangeable bullshit. His hypocrisy quickly moves past blatant into something not far from Jekyll and Hyde, as “Reparation” bounces back and forth from the extremities of peace and violence without a care. One moment his outlook is something along the lines of “we supposed to be able to talk to each other, not turn around and point a gun at your brother,” but before long he’s “bustin’ at punk-ass niggas.” The tat on his stomach reads “no more pain,” but he assures us that “whoever crosses this Outlaw shit in ’06 gotta die.” He has a world of good things to say, but cancels any and all of it out before it can even seep in.

Among the most irritating songs of ’06 ranks “Mr. MuszaMil,” an exceptionally poor take on Simon & Garfunkel’s “Mrs Robinson.” At 3:29, MuszaMil himself spends no more than one minute rapping, while the grating hook makes up the grotty remainder. “Hollywood” is another ho-hum retelling of the individual’s change to reach mainstream success. “Some people get success and change, go Hollywood, get a record deal and relocate out the hood.” Do they now? It isn’t until “Make A Change” that MuszaMil turns heads, finally coming the fuck out of his shell for what is the funkiest and best beat on the LP. “I’ve got faith and hope that one day shit ‘gon change.” It isn’t a step in any new direction, but it is passionately delivered, so much as to make Rey Chester’s Spanish guest verse more than tolerable.

MuszaMil’s attempts to carry ‘Pac’s legacy seem admirable from a distance. He’s decorated his forearm with Shakur’s likeness, petitioned for his star to be on the Hollywood Walk of Fame, and practically made an album in dedication to him with “Reparation.” Despite all of this, his efforts become more and more visibly in vein. “Reparation Is Due” serves little purpose beyond shameless gambit and ceaseless Tupac dick-riding, MuszaMil in the meantime handing his own show over to spoken-word excerpts and yet another guest spot from a dead legend. Thug life? All but merchandise at this point.