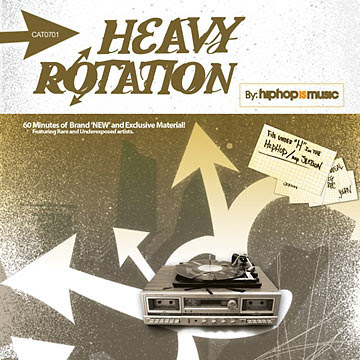 Christian rap has never broken into my heavy rotation. Hell, aside from the occasional and commonplace shout out to the most high on many Hip Hop albums, I don’t think I have a single CD with a religious bent (unless you count the spirituality of the Wu, which is probably valid). Truth be told, ya man’s a lapsed Christian in the truest sense. That disclaimer is made to qualify the following statement. I truly enjoyed the new “Heavy Rotation” compilation, which compiles artists from the relatively-new Hip Hop IS Music, a label whose mission statement says the imprint houses artists who share a “genuine unconditional love for music and God.” In other words, Christian rap. Yet the key here is that the theology and preaching are lightly sprinkled throughout the 21 tracks found here, not forming the base of each song but instead gently reminding you every now and then. It shouldn’t be overlooked that in the above statement, “love for music” technically comes before love of God. And these cats do love Hip Hop, and as many purists do, they attempt to reach for that eternal boom-bap Promised Land built on the solid gold foundations of architects long gone. And they frequently succeed.

The full-length sampler appropriately begins with “Intro” and “Heavy Rotation,” both featuring Braille, the founder of the label and most prominent artist featured here (with five joints). Using a stripped-down drum loop and Premier-esque scratches from Vintage, Braille and co. attack the tracks with articulation, hunger and an ominous confidence that’s contagious. And if you don’t listen carefully, you wouldn’t even realize these talented rappers were Christian also. This makes the occasional references palatable to all but the most ardent Atheists, as most messages of salvation are clothed in larger narratives of personal struggle and ultimate triumph. One thing’s for sure: the artists featured here really are passionate about life, about Hip Hop, and yes, God too. The result is plenty of talented rappers giving tales of inspiration and potency over solidly-crafted beats.

Besides the always-tight Braille, further highlights are provided by artists Ohmega Watts (both MCing and producing) and Surreal. Obviously these are artists unafraid of their personal convictions and passions, and it frequently shows in their music, in the form of genuine sentiments and a larger sense of realness. Problems occasionally arise when that love of Hip Hop is misguided and taken too far, creating music that is not so much building off of influences as aping them wholesale. Whether it’s the great Mos Def impression provided by Othello on “People” or the occasional sense that some of these joints are straight off of “Daily Operation” or “Black Star,” the proceedings occasionally feel too reverential. It’s great that they love Hip Hop (don’t we all?!), but it’s much more effective in my mind to express that love through innovation, not imitation.

Furthermore, the temptation to vocalize one’s love of Hip Hop (or God for that matter) is, upon greater contemplation, largely unnecessary. The best rap artists don’t tell us how much they love the music, they show us by making dope shit. Similarly, the Bible teaches Christians not to express their faith too overtly or publicly, instead doing good deeds and cultivating an inner strength through God. Or something like that, dig? Most of the time on “Heavy Rotation,” the artists understand this, with lovingly-constructed music and subtle but effective religious references. The problems arise when either passion becomes too overt. Fortunately for the Atheist and the Hip Hop head alike, Braille and co. know what’s really good. All praises do!