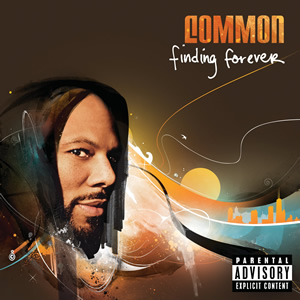 “This is street ra-dio, for unsung hero
Ridin in the Regal, tryin to stay legal
My daughter found Nemo, I found the new Primo
Yeah you know how we do, we do it for the people
From Inglewood to a single hood in Botswana
I see the ‘I’ in ‘We’ my nigga, yours is my drama
Standin in front of the judge with no honor
Barack stick, knight the people like Obama
The karma of the streets is needs and takes
Sometimes we find peace in beats and breaks
Put the bang in the back so the seats can shake
Rebel Cadillac music for the people’s sake
The People”

Artistically speaking there’s little left for Lonnie Rashid Lynn, Jr. to prove. 15 years ago he broke into The Source’s “Unsigned Hype” column, back when both the column and the magazine still meant something. A hip-hop career soon flourished, and as the rapper shorted his nom de plume from Common Sense to Common, a remarkably uncommon thing occured – the underground Chicago rapper became critically acclaimed while simultaneously garnering a larger mainstream following. Com was at times uncomfortable with his newfound audience of “coffeeshop chicks and white dudes” but overall seems to have settled into the idea that people from all walks of life connect to his smooth voice and well thought out lyrics.

It’s those people he addresses both in the opening quotation and throughout his new album “Finding Forever,” where Kanye West plays the part of DJ Premier while Com plays the role of Mahatma Gandhi. It’s not easy to be an icon of progressive music and not get caught up in your own self-importance, but Common manages to display both humility and self-confidence without either one being contradictory. Undoubtedly the smooth influence of Kanye throughout the album helps Com keep his focus, allowing the two to smoothly “Start the Show” while Com accurately describes himself as a “synonym for fresh” where “truth is the emblem.” The diversity of topic matter and sound is remarkable. The duo easily dive into songs like “Drivin’ Me Wild” filled with sly references to a love crazy “like the astronaut lady,” the kind of love KRS-One rapped so eloquently about years ago in “Love’s Gonna Get’Cha (Material Love).” Elsewhere the duo manifests itself more directly in “Southside” when Kanye steps from behind the board make a welcome vocal appearance, as the two flow to excerpts of Don Covay’s “If There’s a Will There’s a Way.” Kanye speaks for both when he declares himself “the future of the Chi” with no hubris.

It’s not often that hip-hop albums feel too short, but at only 12 tracks in length “Finding Forever” ends far too quickly. The bouncing boom bap and hype hip-hop samples scratched into “The Game” are a throwback to early 1990’s rap in the best possible way. “Break My Heart” is soft and soul-stirring without being in any way cornball or trite, the kind of rap Com can express that few other rappers have the moxie to attempt. Even the non-Kanye tracks are pleasant surprises, pulling pearls from oysters seeded with pure hip-hop grit. Black Eyed Peas’ will.i.am rocks a swinging Bob James sample that hasn’t been played out to death for “I Want You,” Devo Springsteen laces Nina Simone into a theme for Common to explain why he’s “Misunderstood” and the late great J Dilla teams with D’Angelo to bring out “So Far to Go.” Through it all there’s Common rapping time and again – soft-spoken but hard-hitting, eloquent without being esoteric. “So Far to Go” embodies everything great about Common – his witty delivery, smooth flow, loquacious lyrics and perfect sense of timing – but then the same could be said for virtually any track on “Finding Forever.” While having nothing to prove at this point in his career, long since having had the doors of both Hollywood and the music industry opened wide for him to stroll through, Common still finds his inspiration in everyday life and proves that he’s as relevant as ever if not moreso. “Finding Forever” is the album one should play for people who say they don’t like rap music – he will undoubtedly prove them wrong.