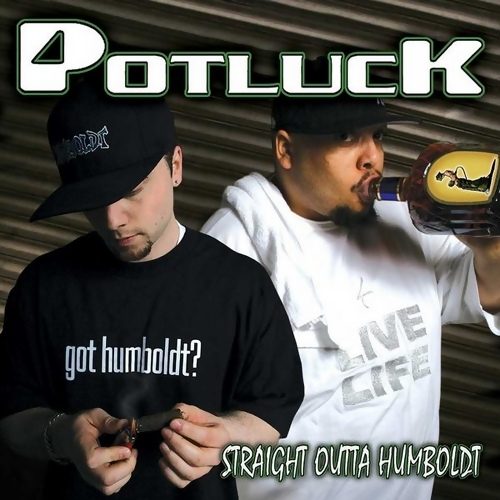 According to online magazine 3am Magazine, “Humboldt’s herb [makes] virtually every other strain grown in North America seem like second-rate Mexican schwag weed.” This is a point that the native Humboldt hip-hop act Potluck has never let its listeners forget since their debut “Humboldt County High” in 2001. Indeed, passionate about both their home town and its main export, Potluck â€“ 1-Ton and Underrated â€“ has become an underground mainstay that has continually produced solid, if unspectacular, music which has landed them touring duties alongside successful artists E-40, Atmosphere, Tech N9ne, Living Legends, Too Short, and Jurassic 5, just to name a few. However, as the introductory track suggests, the challenge remains for the group to make a more progressive step and “Rock the World” with a stronger, determined effort to guarantee that elusive commercial success. And while the latest result “Straight Outta Humboldt” makes a persuasive argument, it nevertheless seems that the group is destined to be lost in the sea of just-above-average underground collectives that lack that last bit of push to get them over-ground.

The beginning track starts with a banging beat replete with hard guitar riffs and a killer Ice Cube sample repeating, “Now I got to show you how the West Coast rocks!” Instantly, you are captivated by the multi-layered rhythms that accompany the two MCs who most definitely start off with a banger. The same melodic concept is applied to the following song, “Get High,” but it’s “Mary Jane” that truly discerns Potluck’s ability to turn a weed song into a great tune. With ominous guitars and organs in the background, a matching ping throughout the hook, and vocal support provided by the Luniz, the song plays like a sequel to “I Got 5 On It,” albeit not as tight, but undoubtedly effective. In similar fashion, “Money Makes the World Go ‘Round” plays like a follow-up to Scarface’s track with Daz of the same title, and catches the two flexing their southern style vocals against a backdrop of descending strings. Other stand-out tracks include “My Life” and “Doin’ Alright,” both of which show how easily both MCs roll over those somber sounds of the guitar and keys. In the former, we hear 1-Ton reflect on his formative years as a person of mixed race: “I wasn’t black, I wasn’t white/ But to the world I was still a nigger, just a little light/ No time for ignorance. I just gotta live my life/ Treat everybody with respect and hope that they can get it right.” In addition, the group is blessed with memorable performances by Tech N9ne and Charlie 2na and closes out on the bonus but epic-like track “Funeral” where both 1-Ton and Underrated philosophize on the importance living right, thereby, being able to die in peace, whenever your time comes. Here, the piano stands out, accompanying both verses and encapsulating the listener.

Despite the fact that Potluck remains an underrated group whose music is lively and lyrical skills are more than capable, they fail to move beyond the predictable (at least, what fans can predict from them) and extend into that echelon of underground kings. The fact is we know that Humboldt has amazing weed, and we know that you really enjoy it â€“ I think we just heard enough of it. In all honesty, seeping through the weed incessant tracks like “Get High,” “Fire,” “Mary Jane,” “Dank Alumni,” “Roll Big,” and the other cuts about Humboldt’s finest, is a seriously good album that is often reflective, insightful, and straight up dope. Ironically, in 2004, Leak Bros. (Tame One and Cage) released a full-length album dedicated to drugs, but were more successful because they chose to use the said topic as a concept rather than simple subject matter. Still, Potluck isn’t far off, unless you consider that this is their sophomore effort and they have yet to grasp that an album has to be fluid and cohesive, whereas “Straight Outta Humboldt” is often disjointed and jumbled, and most times so because of the boring skits (nothing new) and weed songs placed between more philosophical offerings like “My Life,” “Doin’ Alright” or “Love Me,” a track that details the group’s relationship woes as they tour and press on with their music. Something more connected and shorter (20 tracks is too much) would have truly made this album much better than it is, both keeping the audience’s attention and offering the right amount of variety.

On the whole, “Straight Outta Humboldt” has everything to appease hardcore left-coast listeners, satisfy long-time fans and weed-heads, and rake in new heads who live for that melancholic melody laced with great verses and fitting samples. As for this author, I will submit to a low light and the eerie music of “Mary Jane,” while I make use of the EZ roll tube supplied alongside the advanced copy of the album. From what I understand, it’s a staple of the group (or the group’s promoters) to slip one of those in â€“ I definitely do not mind.