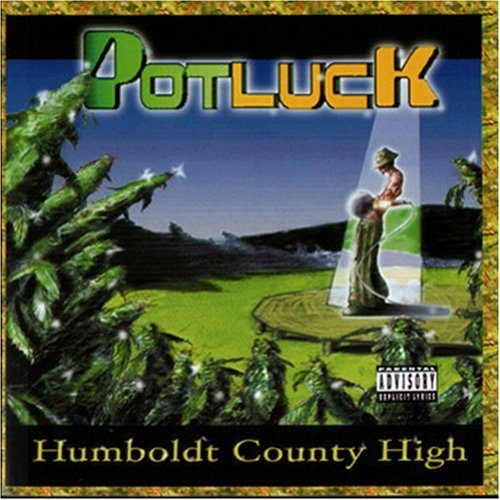 Hailing from the mean streets of Humboldt County, California.. wait a minute, these aren’t mean streets – these are GREEN streets. That’s right – Humboldt County is the self-declared “marijuana capital of the world.” Looking at this album, you might believe it – both the front and the back cover are loaded with sticky buds, and the album’s track list includes songs like “Dr. Feelgood” and “Rollin’ Dem Blunts Again.” Speaking of the latter, this multi-cultural (picture a smoked out Dr. Dre & Eminem) and enterprising duo even threw some wraps in their promo package along with this CD. One suspects if transporting the sticky icky by mail wasn’t a federal crime, they would have rolled up the blunts and said “have one on us” to boot.

The shocker here is that this group is actually much deeper than a twenty sack and a fat bong. Produced by Baby J throughout, the tracks are the right mix of crispy percussion, slinky bass, and smooth melodies. It’s not surprising that these rappers have been asked to gig on the Vans Warped tour, or that their music charted in the pages of College Music Journal – the only surprise to this reviewer is that I hadn’t heard of them before now. When the duo are not praising ganja, their raps show a level of self-awareness and rhyming introspection that will make you question anti-THC propoganda. Take the song “What’s Your Purpose?” for example:

“We all gotta go though, so I meditate, and try to keep my head straight
Gots to alleviate the pain, anticipate my fate
But wait, Mark Fuhrman got my heart burnin
Let’s spark the sermon cause these schoolkids just ain’t learnin
I feel the burden, like JJ and it’s payday for your type
Do it right, hit the light and don’t go out without a fight
I know the days pass fast but I got to keep up
Before I know it still that day will creep up
If I die today, would I end winnin the game
or will my tombstone – will it read just another name?
Don’t claim your fame, let the fame claim you
But if you down for your peoples then they down for you
That’s another round for you, of livin yo’ goals, stay on yo’ toes
God damn! It’s funny how the game go”

Baby J shows the tongue flipping skills of a Bone-Thugs member (he’s pretty fly for a white guy) in this verse, giving him a surprisingly nice dexterity on BOTH sides of the recording booth. But his Potluck partner “1 Ton” is no slouch in the verbal department either, as evidenced on the street soldier tale “Shawn”:

“He no regular individual, Shawn is smooth criminal
Wonderin if his mind is workin off it’s own subliminal
See it seems he followin in his father’s footsteps, and worse yet
They shootin on his block and he the first wet, with a hurt neck
And two in the back, can’t get no slack happy he was shot at
Not even death can scare this cool cat, pulled his next jack
with the bare chest to sport his gun wounds
Come June he play it like a number one tune, so soon
Only 16, livin like a king, and can’t no one fade
Off the scene the spoke gleem, but it ain’t always how it seem
His next page would be his last, for a fifty sack of nose rash
Gotta strap in case they go at it
But no one bigger than the game, and someone always more insane”

Whether rapping about the reals or just good smoke, well-crafted songs abound throughout this album. The eerie piano melody and slick Heather B sample scratched for “In My Chest” is like a dark Krayzie Bone track at it’s finest, the posse deep “Potluck” collaboration is a relaxing Warren G type of funk, while “Game Goes” is something you’d hear coming straight out Tha Dogg Pound. The title track will probably be most heads favorite though, with it’s sing-a-long “Hum-boldt, Hum-boldt, that Hum-boldt County High” hook, an unabashed love of getting smoked out, and a beat that’s futuristic and spacey yet grounded enough in Cali groove to bounce your hydraulics off fat subwoofer quakes. Whether you’re looking for a quick fix or a long player that has a good mix of escapism with true-to-life tales, Potluck is the smorgasboard you’re looking for.