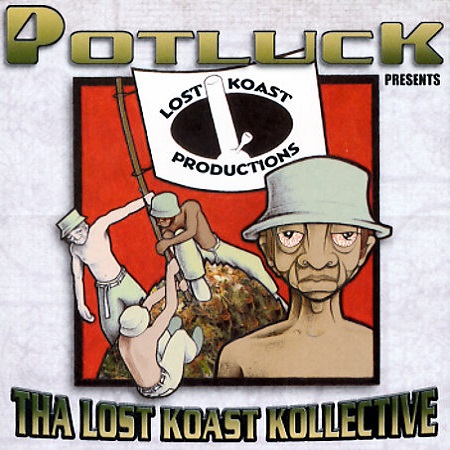 There’s something about Humboldt County, California… but what? Well, all it took for me to figure it out was searching the Original Hip-Hop Lyrics Archive for the word Humboldt and I ended up with a bag of lyric quotes that all seem to evolve around a special kind of herb: E-40 can be caught “mixin’ some hash with some of that Humboldt County grass” (“I’m Straight”), opposite New Jersey’s SimplÃ© E, Spice 1 swears by “that real Indo green shit straight from Humboldt County” (“East Coast/West Coast”), Tash reports that his beloved Mary Jane is “wanted from here to Humboldt County” (“Mary Jane”), trading verses with Rappin’ 4-Tay, Seff tha Gaffla feels “hella good for some reason, got a nigga cheesin’ / Indo’s in season, Humboldt County all the way to the Bay” (“Dank Season”), Mac Dre refuses the “killer brown” being offered, he wants “that shit from Humboldt County” (“I Need an Eighth”), Pep Love knows “the stakes is high but not higher than I’ve been / up in Northern Cali the Humboldt County experience is bomb” (“Pacific Heights”), while Too $hort orders everybody to “roll ’em up, in the Town we get down / on the green and the purple, never on the brown / cause when you hit the O, it’s the real dope from Humboldt / have ya flyin’ real stupid like Dumbo” (“Cali-O”).

Now you know what’s up with Humboldt County. Grazing on these green pastures themselves, rappers 1 Ton and Baby J make sure they represent it right, as readers of this site were able to tell from the review of Potluck’s “Humboldt County High” we posted earlier this year. Back with more tracks and a couple of guests, Potluck now presents “Tha Lost Koast Kollektive”, a compilation featuring mainly themselves and a couple of neighbors, the most prominent being Northwest veteran Cool Nutz.

As one would expect, Potluck continue to praise their local crops (“Humboldt County sess be the very best, never settle for less”), but they refuse to let their act become a one-trick pony. “Humboldt Hip Hop” sees them putting in work for their hometown’s rap scene, by adding James Boy and Garth Vader to the line-up, two locals featured prominently throughout the rest of the CD. On several other cuts, they display their dedication to the rap game, most notably on 1 Ton’s solo creep “Can’t Stop Me”.

While the music – booming productions filled to the top with slick keys, hefty bass and hard kick drums – lets you expect a certain brand of hip-hop, Potluck and affiliates differ notably from countless groups south to them: they are absolutely not about hustlin’ drugs and bustin’ slugs. A very important difference. But with their focus on success, they still manage to school rookies on the rules of the game. “Risin’ On Ya Game” cleverly argues that like-minded individuals are better off than when it’s every man for himself:

“Gotta rise on my game, mane
We all wanna do the same thang
We change lanes just to maintain
and when the pain came it went straight to the brain
so now we want the money and the fame
What I mean is if we all try to be the big mane we’re gonna fall fast
but if we do it together the stormy weather won’t last
and we all get the cash”

The obvious thing to do therefore is to pull together resources and put out a rap compilation. “Tha Lost Koast Kollektive” testifies to that attitude. The fact that Baby J produces the majority of the tracks means that they all have the same advantage. And they make quite a lot out of it: Hussein (“everybody thug but me”) cautions small-time hustlers to stay on their toes on “Bubble a Little”: “Your rice is too hard / the price is too large / it might get you scarred.” DVS admits that on the streets “talk is cheap,” adding, “but I guess we gonna see when I put it down on beat.” Judging from “Talk Is Cheap”, HIS talk is anything but:

“True MC’s and all the rest, it’s time to drop a manifest
this propostion I profess contains clues to the test
Let’s see who the last man standing when they go to crown the king
It’s all about timin’ and formattin’, you better say what you mean
Some wanna live this life so bad they make up fables in rhyme
but they come across so transparent, they just wastin’ their time
I read you like a book from the moment our hands shook
you even got that look, I know because I run with crooks
But why be a perpetrator when life is like a elevator
it has its ups and downs and you gotta get off sooner or later”

Regarding rappers, there’s a similar sentiment voiced by Potluck on “It’s a Shame”, where they complain about the stagnant state of rap music. Baby J: “If you were good I’d give you credit, but you’re pathetic / I heard the beat, the way you’re flowin’ – hell no, I just don’t respect it / I dissect it and your shit is full of hella holes and it just ain’t right / not ‘hoes’, ‘holes’, I mean the shit ain’t tight!”

Not that every last detail on “Tha Lost Koast Kollektive” would be air-tight either. 1 Ton’s and Baby J’s deliveries sometimes lack the final convincing tone, their MCing isn’t up to par with the top shots, and the beats show a heavy influence of traditional Bay Area mobb music. But within their own perimeter, Potluck and friends are quite original fellas. Not to mention singer Christina Fernandez, whose unconventional vocals grace several tracks. James Boy, the rapping and singing white boy is a pro in the making, and once you examine the songs about girls they got on here (Ro’s “Wanna Be With Me”, Hussein’s “Girl”, Potluck’s “R U Down 4 Me”), you’re forced to open your eyes to the deep-rooted positivity that permeates the entire project. Finally, add two great tracks for a little outside flavor, “No Worries” by Cool Nutz and “Absolute Intoxication” by Absolute On End, and you got a dope compilation that makes you long for the green grass of Humboldt County.