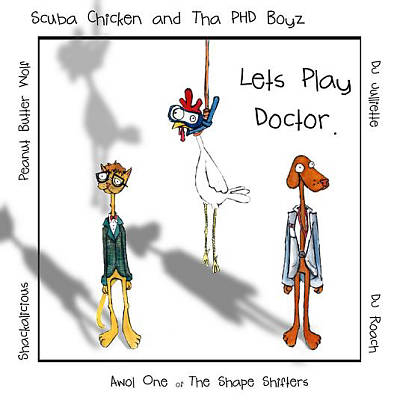 Everyone has run across more than a few albums featuring emcees and beats so bad that you are literally in shock as you listen. Those albums usually have great comedic value despite the lack of any hip-hop vibes. Matter of fact, RapReviews hilarious takes on MC A.K.’s catalog of music was one of the reasons I first peeped the site years ago. Surprisingly, Scuba Chicken and M.C. A.K. actually have a lot more in common than just making utterly horrible music. Both emcees hail from Wisconsin, which would probably have guaranteed death for Hip-Hop in that state had Coo Coo Cal not already showed that the Midwest has projects too. Where the two deviate is the fact that MC A.K. seemed to take his craft quite seriously, making his album that much more unbelievable. Scuba Chicken on the other hand gives us an album that is probably as bad if not worse than MC A.K.’s work with “Let’s Play Doctor” but takes all the fun out of it. See, Scuba Chicken realizes he has absolutely no talent but he continues to make music and uses his lack of talent as a gimmick. His gimmick has worked so well that he has an actual fan base and support from Peanut Butter Wolf and Awol One.

There’s absolutely no point in buying this CD or wasting any minutes of your life listening to it. Scuba Chicken can’t rap and worse is the fact he doesn’t even try. He goes out of his way to make his shit wacker by not rhyming, being completely random, and not making sense. The beats are no better as the garbage featured on this CD is the worst production I’ve ever heard, and I’ve heard plenty of garbage Fruity Loop beats posted online. Scuba uses the simplest loops and drum patterns to make his crap beats that wouldn’t have cut it in the 1980s. Add on top of all this subject matter than is mostly focused on sex and immaturity and you get an album that has absolutely no value either musically or otherwise. To make things 100% unbearable is the fact that it is obvious that the budget for equipment used in making this album was around $20 bucks. Scuba’s verses sound awful as this album is not mastered and is recorded using the shittiest of mics.

I honestly can’t see why anyone would find this funny or why this dude would get guest spots from established acts. It’s sad when your only claim to fame is being horribly awful at something. Scuba Chicken’s shit isn’t even funny, the guy never makes you chuckle about what he says but only about how he says it. This would be all fine and dandy if we could laugh at Scuba, but the problem is since this guy doesn’t take himself seriously you can only laugh with him. And he’ll surely be laughing since he’s turned a gimmick that requires absolutely no work into a paying job. I have nothing against comedy in rap, but I see no comedy in this. With all the bad rap already made, there is no shortage or need for bad rap music to laugh at. There’s also no talent in what Scuba does as anyone could make a record this bad especially if they set out to do it intentionally. So if you want to support some jackass who wants to get paid to dishonor hip-hop and give it a bad name then go cop this. Otherwise, steer clear and let’s hope Peanut Butter Wolf and Awol One come to their fucking senses and realize this dude has no talent.