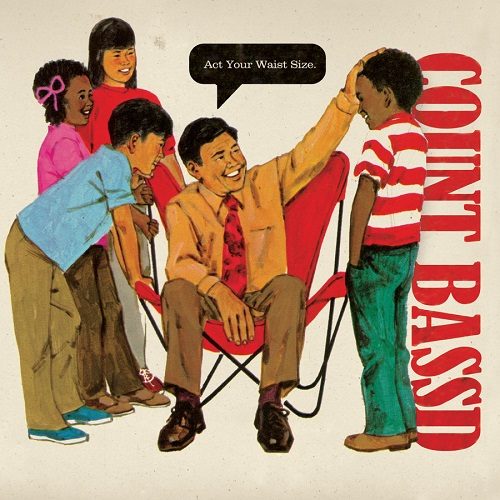 Count Bass D (Dwight Farrell) is allergic to every clichÃ© in the book, and Act Your Waist Size is as good an argument as I’ve ever heard for being yourself, finding some inspiration, and keeping a level head. The level head part is important to Count, and the struggle to maintain it is the central theme in his life and, as his Fat Beats debut throws into sharpest relief, his art.

He has suffered for his music, frequently pawning equipment and relying on the kindnesses of friends (when times got tough, MF DOOM famously hooked Count up with the same MPC he used to record “Operation: Doomsday”), all the while nurturing his vast musical gifts. His dogged resilience fueled by love of music, Count Bass D’s life became his art and vice versa. Act Your Waist Size is a meditation on stability, including not only analyses of his life, his friends’ lives, and life in general, but also reasoned conclusions, sometimes even mini-Manifestos. Similarly to 2006’s other subtly-enlightened everyman, Dudley Perkins, Count emulsifies message and medium into a single thing. Kind of like the Gospel: the Word communicates transcendent wisdom but is also Holy itself. Or kind of like Elliott Smith- another songwriter with a producer’s ear- said: “[â€¦] the sound of the song is the same as the song itself.”

Count scratches, produces, raps, sings a little, and is the only man to record an entirely live album (1995’s “Pre-Life Crisis,” for which he played every instrument), and though a true renaissance man, it would all count for nothing if he didn’t possess a natural sense of rhythm and texture.

There is more than a trace of Madlib and Metal Fingerz DOOM in the Count’s beats; the heavy sampling, overlapping sounds, careful attention to crackling snares, and amorphous song structures all signal a dusty-fingered, slightly obsessive perfectionist is at work, but the M/MF comparison is especially apt considering how, for all their requisite thought and effort, the beats have a somewhat precarious feel. At times skeletal, at times lush, Bass D’s style is a little underwhelming at first. What won me over were touches like the rattle of a shaken spray-can and, taken from a classic Style Wars scene, graf legend Iz The Wiz yelling, “This is it! This is IT!” Blatant “I heart hiphop” moments abound on Act Your Waist Size and are sure to solicit warm feelings among rap heads.

“Case O’ Dilla,” the stream-of-consciousness J. Dilla tribute, seems to feature the electronic narrator from “Midnight Marauders” doing the “keep bouncin'” intro to “Oh My God.” Upon closer listen, the sample is not from the song itself, but a re-appropriated “we bouncin'” snippet designed to recall the track, one of Jay Dee’s many Ummah-era classics. Riding the line between thrift and gift, I think Count sidestepped clearing the sample by doing the sample himself; I suspect he pulled a similar trick on the sublime “(You Know That You Play) This” by using mere split-second samples of ODB making his trademark guttural noises. Later, you’ll hear Marvin Gaye beginning his “dance with me, won’t you dance with me baby” verse, but Count only includes a half-second of Marvin’s spacey fade-in. I could be wrong (I admit that I don’t know anything about sample laws), but something tells me Count is making references, giving props, and citing his sources on a budget; after all, Fat Beats’ promo drops beg, “Please don’t copy. Seriously. He needs every sale.” Either way, Mr. Bass D comes off sincere and clever, a little bit cheap, and all the more lovable for it.

“Junkies” is a bewildered look into violence, drinking and drugs, as Bass D admits “I don’t understand the ways of the black man.” Far from a rapper that lies about being respected by all the boyz in the hood, Count regrets, “I can’t say I never ran/ ‘Cause with the pistol in they waist they think they He-Man.” He goes on to spin a story about a dude with no shoes and a family to feed trying to sell him a walkman. Counts says no, so the guy switches his pitch, hawking a bootleg “God’s Property” CD (remember Kirk Franklin?). Count has no interest in picking up a stolen, burnt Gospel CD, but he expresses interest in a TV. Well, the dude’s got one of those, so $50 later Count is back at home watching Jerry Springer on his new stolen/bought boob tube, itself a comic exploitation of ghetto life. The loose, conversational story situates Count as more than just a critical observer of social strife: he’s right there in thick of it.

Count references (in DOOM-style third person) his own break from the ultimately unfulfilling lifestyle of nonstop blunts and booze on “The Slugger of Louisville” when he says:

“Only Japanese he speak is ‘Kompai’
Drink too much sake need his Lord to come by
Bon voyage to the sweet bye-and-bye
I guess he spoke too soon when he said he gon’ die high.”

The sentiment is echoed on “Pot/Liquor” by one of the LP’s few guests, Kid Captain Coolout. Beyond unfulfilling, the overindulgence is simply unsustainable, irresponsible and clearly incompatible with adulthood:

“I don’t need no rehab to pass through it
The Kid Cap love the kids, I HAD to do it”

Count Bass D holds the album together in a variety of ways. The lyrical side of Act Your Waist Size is an extension of the title; Count raps about love, fun, family, poverty and music from the perspective of a man who has taken stock of his life and decided to make some changes, but his blunted delivery and unpolished singing prove he’s far from taking himself too seriously. The beats are all rough-hewn patchworks, but I have a hunch that Count throws a little live instrumentation on there as well. They hang as a smoky, homemade whole. And while he might brag about being the best in front of and behind the boards, his beats are a million miles from slick perfection. Especially on Act Your Waist Size’s instrumental interludes, Count displays a Prince Paul/KMD affinity for bouncy, cartoony samples that keep the mood buoyant. No matter how grown up Mr. Bass D is, his music still has a positively youthful looseness.

Fat Beats has served as this year’s savior of good-time rap, releasing excellent albums by Ugly Duckling and Glue. Next to those bouncy, energetic groups, Count Bass D might seem too slow, too hit-or-miss to contend with Bobbito Garcia’s new stable of Technicolor party rockers. Well, it’s just not so. Though Count has a reputation of enlivening the deadest of jams, Act Your Waist Size is a measured headphone record, perfect for drinking red wine and playing video games. It’s a living room record. A wool socks record. It’s the least condescending thinking-man’s LP I’ve heard in a long time, and though it lags a little with run-on raps and meandering crooning, the end result is a cohesive album that clearly represents a man in full.