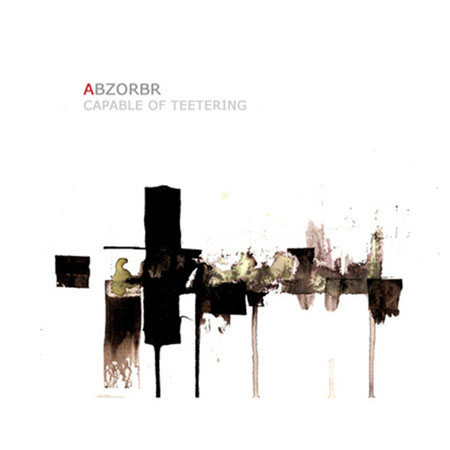 Something must be in the water in Minnesnowta. First there was Prince, who is an extremely capable musician, but certainly not your average chap. Then, Slug (of Atmosphere) came along hailing praise to the frigid state amongst his self-loathing and self-reflexive lyrics. Now, from St. Paul, Minnesota, comes the group Abzorbr who gives us more of the same in bizarre fashion. Something seems amiss immediately after you look at the cover art for this project, an inkblot. The inkblot is a good representation of the abstractness and borderline craziness of Abzorbr.

The group Abzorbr doesn’t live by any conventions. They have no intent to conform to society or even typical rap standards. That being said, many average hip-hop fans will find Azborbr’s new album “Capable of Teetering” a bitter pill to swallow, especially given that it barely ‘teeters’ within the genre of hip-hop music in the first place.

The band consists of two brothers that handle the production and live instrumental aspects of the project, while the lead vocals and lyrics are headed by a man that goes by the stage name Kristoff Krane, real name Chris Keller. Vocally, Krane is a volatile mix of Slug and Zach De La Rocha from Rage Against the Machine. At times, particularly on the first track “Sleepy Dreamer,” he sounds a lot like Mike Shinoda from Linkin Park too. This description doesn’t make Keller sound half bad, depending on your musical tastes, but problems arise when he attempts to flow–the band explains it as “a frantically-driven, yet, soft-spoken vocal tantrum,” which is mostly accurate minus the occasional moments of jarringly loud changes of mood within certain songs. These tantrums bring to question Krane’s mic presence, as you can hear him audibly take gasps of air in between lines.

Beyond Abzorbr’s first limited release EP, Krane has done some “improvisational work”, also known as freestyling in the rap world, and this knowledge makes one believe that much of “Capable of Teetering” is more of the same. The lyrics are not completely disconnected from one another but sometimes it feels like you are hearing a ranting stream of consciousness. The following is an example of Krane’s better lyrics from the previously mentioned song “Sleepy Dream”:

“Two horns and a halo in perfect first person
verse imaginary friend, my fantasy’s a sin
it hurts to be a nervous wreck, perfection never met
it hurts to keep a balance underneath my heavy skin
It’s promising to see the problems at the end of fingertips
I still lack the fingerprints to make the perfect match
Put me to the test, I’ll promise not to cheat
Pick up my teeth and I’ll make this mess more clean..”

These are the best lyrics on the album because they relate to the feeling of inadequacy that everyone feels at some point in their lives. These are the moments when Abzorbr prevails, but when they mix it with the overdramatic, like “curling in a ball in front of the mirror” or the fanciful “puke on a rainbow turned upside down, froze in its cocoon,” Abzorbr loses sight of relating to any audience. In fact, there are so many points in the album that it feels like it is about to hit a groove, then it is ruined by a rhyme that strays from the formula, or an annoying hook, of which there are many. The silver lining is that Abzorbr offers a different perspective than the exhausted subject matter of most current hip-hop, which makes for an interesting listen.

Almost every track is overshadowed by the aggressive, marching, live drumming and accompanying cymbals, whereas some of the additional laptop created sounds are quite interesting. Unfortunately, the synthetically created hums get drowned out when the songs get into full swing. On “Sleepy Dreamer” and the concluding cut “Something’s Missing” there is an organ that does a good job of adding depth to an otherwise musical clutter that makes it difficult to differentiate one song from any other, making these tracks some of the best on the album. Even structurally, almost every song starts with the calm before the storm, the storm hits, then it’s calm again, and it just gets tiresome. Though it does not always work, Abzorbr should be commended for approaching their brand of rap with real instruments and the use of a laptop as a tool to create music–it is inspiring in a genre that often focuses too heavily on earth-shattering bass and little talent.

The lowlights of the album are “Thorn Picks Rose” which has a whiny chorus that sounds like a nursery rhyme or children’s jump rope song and “1st Song Abzorbr Ever Recorded To Save Your Life,” that bears an extremely generic house music beat, sloppy shuffling percussion, and 3 electronic keyboard keys repetitively stroked.

After listening to “Capable of Teetering” it is hard to tell what Abzorbr is trying to promote with their music, according to them “Before making any possibly destructive connections with those who are, unfortunately, involved in the fascination of dehumanizing others. Abzorbr is currently affiliated with other artists who support movements rooted in empathy and will continue to reach out.” This is elementally a paranoid statement about how corporations are bad and that Abzorbr is for good causes, though the music they play is constantly referring to sadness, alienation, and sometimes suicidal tendencies. Most prevalently, the album sets a mood of unrepressed and unrelenting neurotic anger that spills across its entirety.

Sometimes when a group is so adamant about being abstract for the sake of the art it lacks sincerity. It’s clear that Abzorbr at least believes in what they are saying and they are not simply relying on gimmicks to sell records, because I doubt they care. Abzorbr already has a large group of fans on the internet that enjoy the coffee shop revolutionary stuff that they are doing, so they don’t need another critic’s blessings.