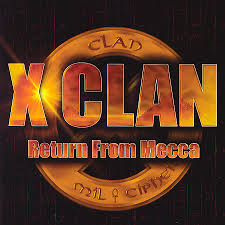 Many may remember X-Clan as a significant, yet controversial representation in hip hop with the emergence of their 1990 debut album “To the East, Blackwards” which expressed its Afrocentrism and activism. Unfortunately, soon after the release of their second album “Xodus” in 1992, the group demobilized because of the decrease in commercial success and direction that hip hop was headed. After a lengthy intermission, X-Clan’s reunion album “Return From Mecca” celebrates old and new school hip hop after approaching almost the fourteen year mark since separating.

During the golden age of hip hop based in New York City, marked by Run-D.M.C.’s “Raising Hell” in 1986, the old school hip hop was once characterized and known for its Afrocentric lyrics, soul, jazz, and samples. It was a time known for socially conscious lyricism and was soon to be known as conscious hip hop. Like many others during this revolutionary period in hip hop, X-Clan also hailed from New York and definitely made their mark as classic artists during this era. Originally comprised of Brother J, Paradise the Architect, Sugar Shaft who passed from AIDS in 1995, and Professor X who unfortunately passed away in March of 2006 due to complications from spinal meningitis, X-Clan has come back with a vengeance with new additions to the clan in order to continue where they once left off.

Unique production from the likes of DJ Fat Jack, Quazedelic, Ultraman, J Thrill, Proh Mic, ACL, P Nice, P. Shelvin, DJ Khalil, Jake One, Bean One, and DJ Quik spans throughout the album to blend a wide variety of sounds into one solid, concrete masterpiece. As the album begins with an intro from Brother J, he follows a rather familiar “X-Clanesque” revolutionary feel. With tribal sounds in the background, Brother J professes, “Living light. Reflection of the source. Freedom is now. Justice is now…X-Clan millennium cipher. Revolution, evolution, the solution.” X-Clan has always been notorious for their more controversial lyricism in their tracks and through the years, little has changed. Their passion still exists towards the Blackwatch movement which began in order to help hip hop artists grow more self-awareness and knowledge about Black activism. It is a common theme expressed in many tracks throughout “Return From Mecca” such as in “Why You Doin’ That” which rebels against all of life’s vices including terrorism, decrease of self-worth, social unawareness, and difficulties in reaching “conscious living.” “Prisons” featuring Christian Scott ties together the correlation between the choices that society and the youth make to ultimately end in a life in “prison,” whether it be enslaved, incarcerated, or death. The song completes with a brilliant, intense trumpet solo. With an upbeat production with high pitched sounds similar to that from a marimba, “Atonement” featuring Jah Orah talks about the restoration of friendship and harmony to make society and equality more consistent as Brother J says:

“Everyday a gun shot
Everyday a man down
Mere colors can mark you on the wrong side of town
We’re told keep our head up
Forced to ducked down from cross fire
Your blood stains the ground
Who stands to blame when chalk sketches the ground
Town to town
Death is a common language
Families in anguish
Deeper than pain hits…
The red, black, green
Liberations like manners that you learned as a seed
Respect every culture, every face, color, creed
If they violate they bleed
More salt to the wound
It’s a whole different tune
When you’re trying to unify and everybody want room”

A cover of a David Bowie classic, “I’m Afraid of Americans,” X-Clan’s “Americans” featuring Jacoby Shaddix of Papa Roach introduces a rock style blended with the predominant hip hop beats. Here, X-Clan shows the prevalence of violence, war, drugs, greed, and a land leading to genocide as it all stands to be a sarcastic, yet realistic “American way.” Over a slow piano beat, “Self Destruct” shows the negative state of mind of the masses to resort to drugs, violence, and any other means of self destruction as equality and justice seems to be the only solution and end. With a glimpse into one of Malcolm X’s famous speeches to stand up and represent, it sets the tone for “Trump Card” featuring Hannah Barbera which explores the importance of “knowledge, wisdom, manifest culture, power of equality.”

Aside from the more serious tracks throughout “Return From Mecca,” X-Clan keeps it entertaining with their golden era signature style in some of my more favored tracks. The first single to release from “Return From Mecca,” “Weapon X” samples D-Nice’s classic jam “Call Me D-Nice,” while “3rd Eyes On Me” is a refreshing twist on 2Pac’s “All Eyes On Me.” Who can resist a sampled 2Pac and D-Nice track?

The resurrection of X-Clan has come back with fierceness. Although Brother J takes control of the lyricism for most of the album, the variety of production and guest appearances makes the album even more appealing and provides some much needed variety in the midst of similar subject matter from track to track. The social consciousness and innovative, yet poignant lyricism is what X-Clan is known for and although hip hop has changed, these are issues that remain stagnant and need to be heard at any level. X-Clan provides a positive image and wisdom to any hip hop listener as we can all learn a thing or two. Let’s just hope we don’t have to wait another fourteen years to hear X-Clan again as it would be, once again, an unquestionable disappointment in hip hop.