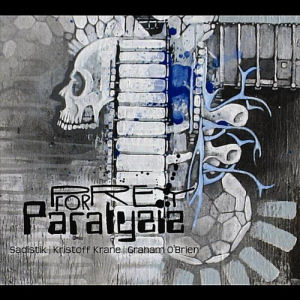 Sadistik and Kristoff Kane are no strangers toRapReviews as both have had solo and group albums reviewed on this site, with mixed, but generally good reviews for both. After touring extensively this past summer, the duo realized that they had the chemistry to do an album together and “Prey for Paralysis” is the result. Sadistik was previously described on this site as mix of Slug and a slightly more cynical Eminem with a depressive and contemplative energy. This is quite the contrast to my exposure to Kristoff Krane as I found his last album to contain relatable music with a positive outlook. Curiously, Kristoff Krane eschews any positivity on this collaborative effort and instead matches Sadistik with a darker, apocalyptic outlook on life. With both rappers on the same page and with producer Graham O’Brien providing a bleak, industrial musical backdrop, “Prey for Paralysis” is every bit the perfect storm of pessimistic energy one would expect.

An album this dark and depressing runs the risk of wearing thin on almost every listener, but Sadistik and Krane avoid this issue by limiting the album to 10 tracks. With the album condensed in that manner, the album avoids becoming an overbearing downer. On those ten tracks, the duo remains surprisingly engaging and versatile. “Pyramid Song” sets the tone for the album as Sadistik and Krane trade verses contemplating the point of life, but providing little in the form of hope or optimism. “Bad Timing” finds Krane opening with his predictions on the end of the world:

“Without a doubt in my mind, in the blink of an eye
The world as we know it will be combined
All the seas will go dry, all the creatures will die
All the trees will topple over and the humans will hide
Will look up in the sky and repeat the word “why?”
And deep down in our hearts we will plead for their lives”

Sadistik’s response to Krane’s apocalyptic predictions provide little more than affirmation of the bleak outcome. After just a few tracks, it’s easy to notice that these two emcees definitely have chemistry and work very well together. Each song finds the duo trading verses flawlessly and sounding more like long time band mates than first time collaborators. Perhaps the best example of the duo’s chemistry is on “Freedumb” where they impressively alternate lines on the last verse of the song. Kristoff Krane holds his own throughout the album, but it’s easy to come away impressed with Sadistik’s ability to tackle the double time flow with relative ease. The duo’s chemistry is only limited by the fact most of the songs are too short to showcase just how in tune these emcees are with each other. “Elizabeth Bathory,” “MIso” and “Stupor Star” are all quality songs, but neither cracks the two minute mark. “Elizabeth Bathory” actually feels like the song is just beginning to develop right when it ends. “Stupor Star” actually manages to fit a lot of substance about the duo’s view on the rap game in a minute and a half, but it’s barely enough to let the concept and track develop. “Hunter’s Prey” features a great intro and build up, but it takes up a full minute and a half of the two and half minute song so in essence you get 90 seconds of build up for 60 seconds of music.

Overall, “Prey for Paralysis” is an enjoyable album for what it is. Its short duration keeps it fresh, but ultimately also leaves the listener feeling a little short changed. On one hand, it’s unfair since the brevity of the album is a plus for those not wanting to listen to an hour of depressing music, but on the other hand paying full price for a 22 minute album is hard to do. If you’re a fan of either artist or the producer you will not be disappointed by the quality of the music, but you’ll be left wanting more. For those unfamiliar with anyone involved, but who enjoy dark and dreary hip-hop, this is definitely worth a listen.